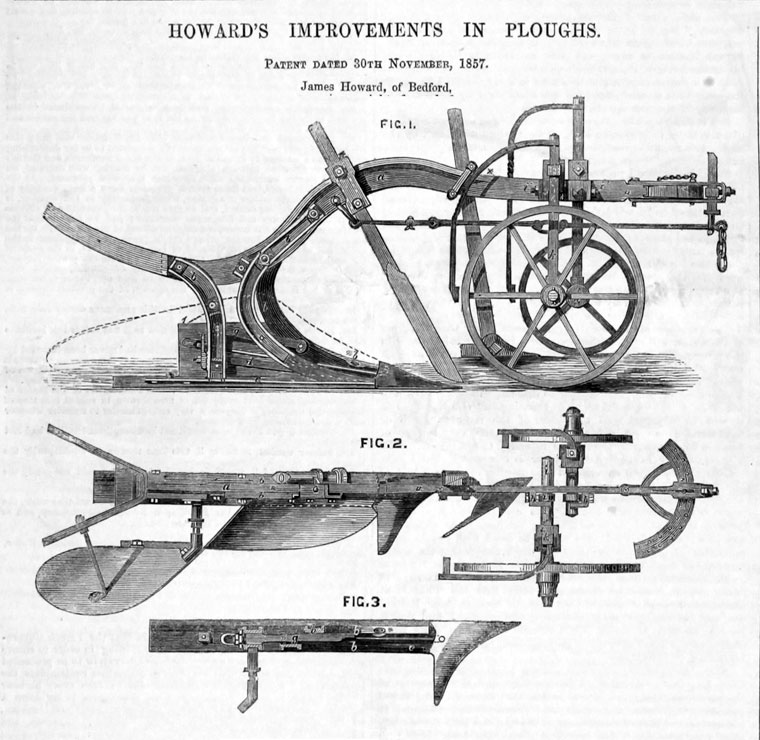 1821 October 16th. Born at Bedford the son of John Howard and his wife Elizabeth

1841 Living at High Street, Bedford with parents and siblings [1]

1889 Obituary. Agriculturalist, stock breeder and senior member of J. and F. Howard died in London of apoplexy. Last week he was elected unopposed for the County Council of Bedfordshire. Just recovered from the death of his wife a year ago. Aged 67. Represented Bedford as a Liberal 1868-74 and Bedfordshire from 1880-85. Chairman of the Bedford and Northampton Railway and three times mayor of Bedford and also high sheriff of Bedfordshire. [7]

JAMES HOWARD, of Clapham Park, Bedfordshire, senior partner in the firm of Messrs. James and Frederick Howard, Britannia Iron Works, Bedford, was born at Bedford on 16th October 1821, being the eldest son of Mr. John Howard, founder of the business, who held the office of mayor in his native borough four years in succession.

He was educated at the Bedford schools, and from his boyhood manifested a fondness for mechanics.

At the age of twenty he introduced a plough of his own design, made entirely of iron and steel, which he exhibited at the Royal Agricultural Society's show at Liverpool in 1841; and being unable to find a ploughman acquainted with a wheel-plough, he took the handles himself, and steered his course so successfully as to win the first prize.

Possessing great mechanical skill, he effected many improvements in agricultural implements and machinery, including ploughs, harrows, horse-rakes, self-delivery reapers, hay-makers, machinery for tilling land by steam power, mowers, sheaf-binders, straw-trussers, in addition to his inventions of moulding machines, and steel sleepers and chairs for permanent and portable railways. His mechanical skill was early exemplified by his invention in April 1852 of a method of chilling cast-iron; and again in 1870 by the introduction of the tubular safety boiler known by his name (Proceedings 1872 page 278); indeed to the end of his life he was busy with new inventions.

Having previously contributed valuable aid in the promotion of improvements in Bedford, he was three times elected mayor; and during his mayoralty a comprehensive scheme of drainage, water- supply and sewage utilization was inaugurated; while to his ingenuity and sagacity it was owing that Bedford seas the first place to be severed on the separate system, whereby the storm-water and the sewage are kept apart in their flow through the public sewers.

He became a Member of this Institution in 1860, and was also a prominent member of various other public societies, having served as President of the Association of Agricultural Engineers, as well as of the Farmers' Alliance and of the Loudon Farmers' Club. For many years he was a director of the Agricultural Hall, Islington, London, in the erection of which he was mainly instrumental. He was also an active member of the council of the Royal Agricultural Society, and chairman of the Bedford and Northampton Railway.

He represented Bedford in parliament from 1868 to 1874, and Bedfordshire from 1880 to 1885. Of this county he was a magistrate and deputy-lieutenant, and in 1879 filled the office of high sheriff.

His death occurred in London on 25th January 1889, at the age of sixty-seven; and it was only in the previous week he bad been returned unopposed to the first Bedfordshire County Council.

JAMES HOWARD, formerly member for Bedford, and one of the leading agriculturists and agricultural machine makers in the United Kingdom, died suddenly in London, on the 24th January 1889, of apoplexy. Mr. Howard was in his sixty-fourth year, and had pursued an active life, both as a manufacturer, as a stock-breeder, and as a politician.

He also took a great interest in the Patent Laws, holding that the present system of provisional protection for nine months, with power of extension to at least twelve, opened the door to jobbery and fraud, and that patentees should either have a short provisional protection, or should lodge a complete specification, as in America. Mr. Howard's Britannia Implement Works at Bedford were well known, and for many years they have been among the most extensive in the country.

He became a member of the Institute in 1881.