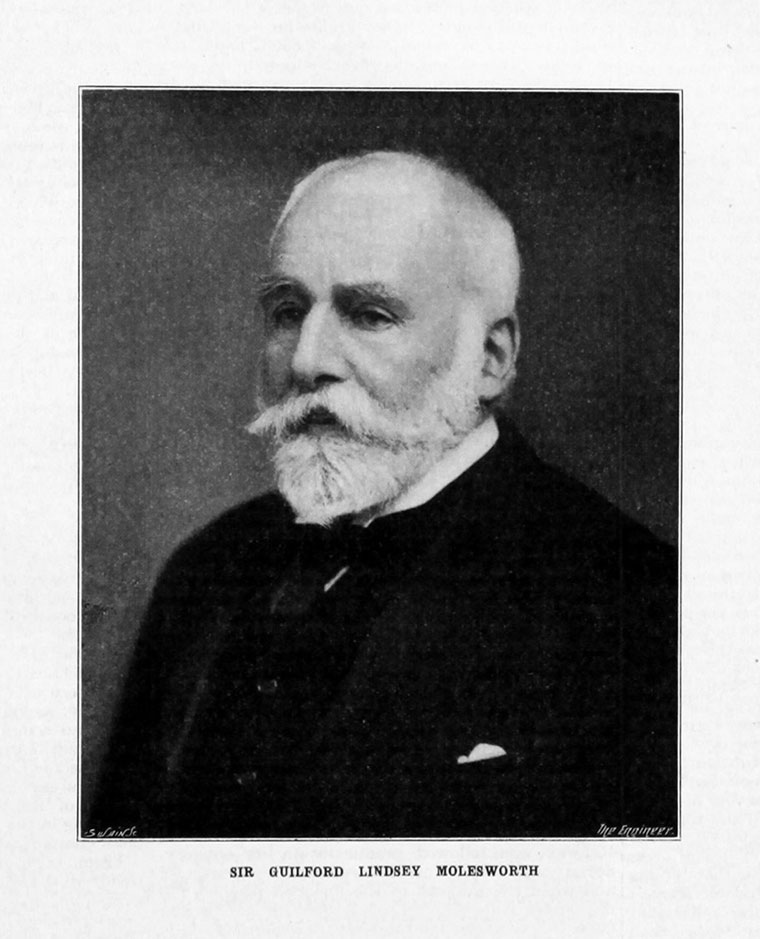 He was educated at the College of Civil Engineers, Putney, then became chief assistant engineer of the London, Brighton and South Coast Railway, but soon resigned to conduct the construction at the Royal Arsenal, Woolwich, during the Crimean War.

He returned to London for a number of years, worked at his profession, then went to Ceylon in 1859 and in 1862 became chief engineer of the government railroad in Ceylon.

From 1871 to 1889 he was consulting engineer to the Indian government with regard to State railways.

He received medals from the British Government for his services during the Afghan War and the Burma War, and was president of the Institution of Civil Engineers in 1904.

"On Thursday of last week Sir Guilford Lindsey Molesworth entered his 95th year, having been born on May 3rd, 1828. Although his advancing years have impaired his eyesight, he still retains all his faculties, and has a remarkably well-preserved memory. His engineering education was begun at the College of Civil Engineers, Putney, and was continued during his apprenticeship under Sir William Fairbairn. For a time he was engaged on the London and North Western and the London and Brighton Railways, and from the latter date until 1889 he occupied the post of Consulting Engineer for State Railways to the Government of India. His well-known pocket-book, of engineering fomrulae, first published in 1863, is but one of his numerous contributions to literature, his other writings covering a wide field, embracing novels, a text-book of bi-metallism, treatises on socialism, political economy, masonry dams, light railways and reason and instinct in ants, and a life of his father, the later Vicar of Rochdale.

He was born on 3rd. May 1828 at Millbrook, Hants, at which place his father was then curate, and his early education was received at the King's School, Canterbury, and at the Manchester Grammar School.

In 1844 he entered the College of Civil Engineering, at Putney, and on leaving, about 1846, he went, as articled pupil, to Mr. Robert Dockray, chief engineer of the London and Birmingham Railway (later, the London and North Western).

The years 1847-49 he spent as apprentice in the works of Mr. (afterwards Sir William) Fairbairn, in Manchester, and after completion of his articles he became chief assistant to Mr. William Doyne in connexion with railways and iron works in South Wales.

This was followed, two years later, by a position as chief assistant engineer on the London, Brighton and South Coast Railway under Mr. R. Jacomb-Hood, and by work at the Woolwich Arsenal, during the Crimean War.

In 1854 he started practice in London as a consulting engineer, and a few years later, in 1859, he left London for Ceylon, to take up all appointment as engineer and locomotive superintendent to the Ceylon Railway Co., then under construction.

In 1862, when the line was taken over by the Government, he was appointed Chief Engineer.

In 1866 he became Director General of Railways and Director of Public Works to the Government of Ceylon; and in 1871 he was made consulting engineer to the Government of India in connexion with State Railways, and during his tenure of office, which extended to 1888, no less than 3,984 miles of railway were sanctioned, and 3,450 miles were opened.

Mr. Molesworth served with the Army in the field in the Afghan War (1879) and in Burma (1885), being concerned in railway survey work at the front, and his services won the thanks of Queen Victoria, with the Afghan Medal and the Burma medal and clasp.

In 1896 Sir Guilford visited Siam to act as Arbitrator in matters of dispute on the Siamese Railway, and two years later, at the request of the Foreign Office, he paid a visit to the East Coast of Africa to report on railway development in Uganda.

That compendium of useful technical information, entitled "Molesworth's Pocket Book of Engineering Formula," has, of course, made its author's name well-known to the engineering profession in all parts of the world, but Sir Guilford's literary activities were not confined to this vade-mecum, as he also published from time to time works on various engineering subjects, as well as on the decimal system of coinage, in which he was much interested, and on other matters.

Sir Guilford died on 21st January 1925, in his ninety-seventh year.