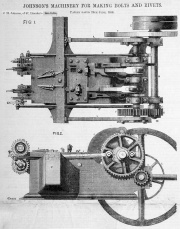 1858. Machinery for making bolts and rivets. 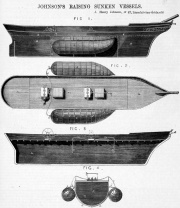 JOHN HENRY JOHNSON, senior partner in the firms of Johnsons and Willcox, patent agents, and J. H. and J. Y. Johnson, solicitors, died at his residence, Mountains, Tunbridge, on the 12th March, 1900, in his 73rd year.

He was born in Kendal and was articled to a solicitor in that town.

Ultimately he started in London as a solicitor and patent agent, the latter business being originally intended as an offshoot of a patent agency business carried on in Glasgow by himself and one of his brothers, but the London business became the principal one.

Mr. Johnson was concerned as solicitor in some of the most important patent cases of the last forty years. In conjunction with his elder brother, Mr. James Yate Johnson, who was a Barrister of the Middle Temple, he produced the “Patentees Manual,” which is well known as a valuable compendium of Patent Law, and for some years he was the proprietor of “The Practical Mechanics Journal.”

Mr. Johnson was the first President of the Patent Agents’ Institute. He suffered from a severe and painful illness during the last twelve years of his life, and was compelled to withdraw from active participation in business and to live entirely at home.

Mr. Johnson was elected an Associate of the Institution on the 2nd May, 1865.