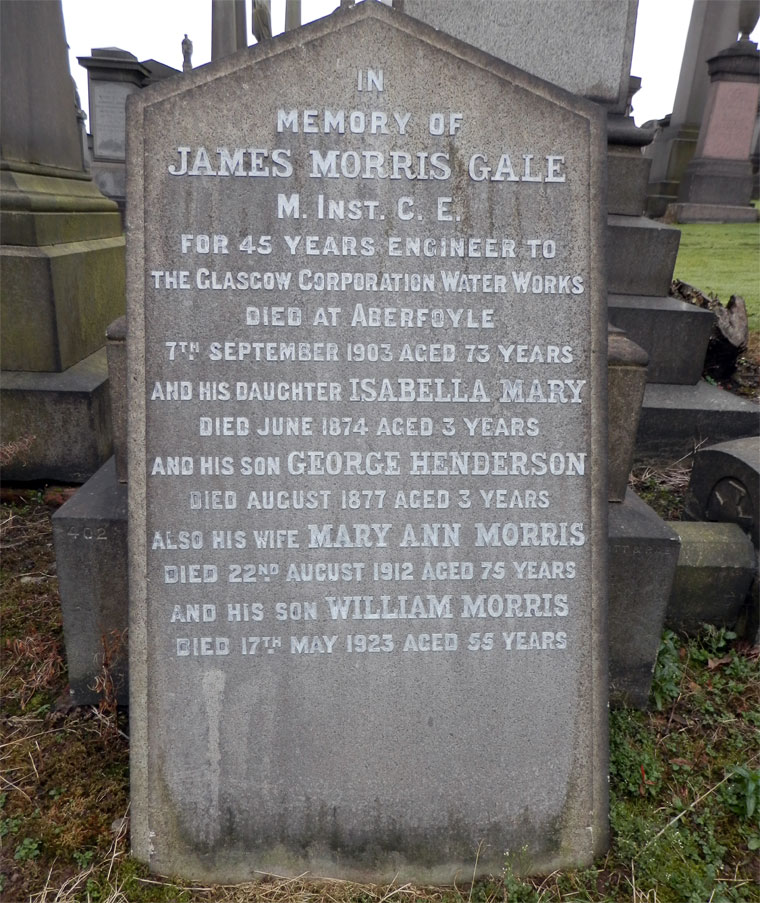 "...record with regret the death of Mr. James M. Gale, formerly water engineer for the city of Glasgow, which took place on the 7th inst. Mr. Gale, who was in his 73rd year, had been in failing health for some years, and about the end of last year be placed his resignation in the hands of the Corporation of Glasgow, having for some time previously relinquished his duties. Gradually becoming weaker since that time, his death now has not been unlocked for by his friends.

Born at Ayr in 1830, Mr. Gale received his education at the local academy, and when fourteen years of age went to Glasgow, and entered the office of his brother, Mr. William Gale, who was engineer who was engineer to the Gorbals Water Company - the Gorbals being a formerly detached district in the southern part of Glasgow. To extend his knowledge of engineering be attended Glasgow University, and studied under Professor Macquorn Rankine and Professor Laing. While in the office of his brother he was employed in the design and in supervising the construction of the Gorbals Waterworks, which were opened in 1847. In 1854 he was assumed a partner by his brother, and entrusted with the construction of the Balgarry reservoir, the largest o{ the reservoirs connected with Gorbals works. At the same time Mr. Gale drafted plans for the proposed enlargement of these works, which were considered an alternative scheme to the Loch Katrine project, then receiving attention. When the Corporation obtained the Act in 1855 for the introduction of the new supply from Loch Katrine, Mr. Gale acted as resident engineer on the city section of the scheme under Mr. Bateman, by whom it was designed and carried out. In 1859, when the works were completed, Mr. Gale was appointed chief engineer of the Glasgow Corporation Waterworks, and from that time onwards until the close of last year-a. period of forty-three years he had entire charge of the works. Among the numerous works which he personally designed and saw carried out in connection with the water supply of Glasgow, reference need only be made to the entire duplication of the original Loch Katrine scheme, at a cost of nearly £1,500,000. The necessity for this immense extension was realised so long ago as 1882, and three years later an Act was obtained giving power to raise the level of the loch, and to construct an additional reservoir. For the whole of the plans Mr. Gale was responsible, and the work was carried out under his direct personal supervision. His services were also requisitioned by various local authorities in the West of Scotland, in connection with water supply undertakings, and the burghs of Dumbarton, Port Glasgow, Hamilton, and Kilmarnock benefited from his able assistance. In the engineering profession Mr. Gale held a high place. He was a life member of the Institution of Engineers and Shipbuilders in Scotland, and for a period occupied the position of president. He contributed, from time to time, many useful papers, which are embodied in the printed transactions of the Institution. He was throughout his career held in the greatest esteem by the successive Town Councils under whom he served - not alone for his eminence as an engineer and for his unremitting zeal in the interest o£ Glasgow, but for his high personal character. A son of Mr. Gale, Mr. William M. Gale, is now chief assistant to Mr. W. Sutherland, formerly an assistant under Mr. Gale, senior, who was appointed Glasgow waterworks engineer several months ago."

JAMES MORRIS GALE, who, for a period of fully forty years, was the Engineer-in-Chief to the Glasgow Water Commissioners, died on the 7th September, 1903, at his residence at Aberfoyle, which lies in the district of the famous Loch Katrine water scheme, by which his name will be known to future generations of water engineers.

He retired from his post at the end of 1902, with the respect and esteem of his employers - the Water Commissioners. . . . [more]