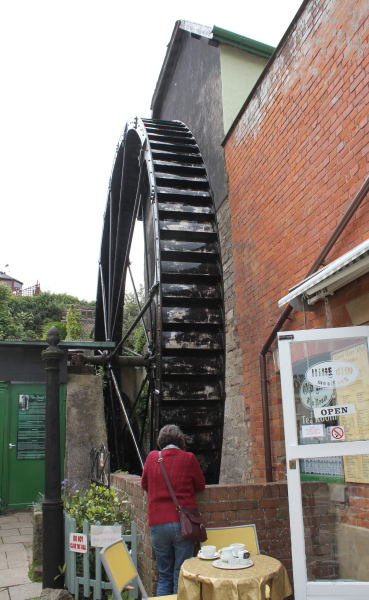 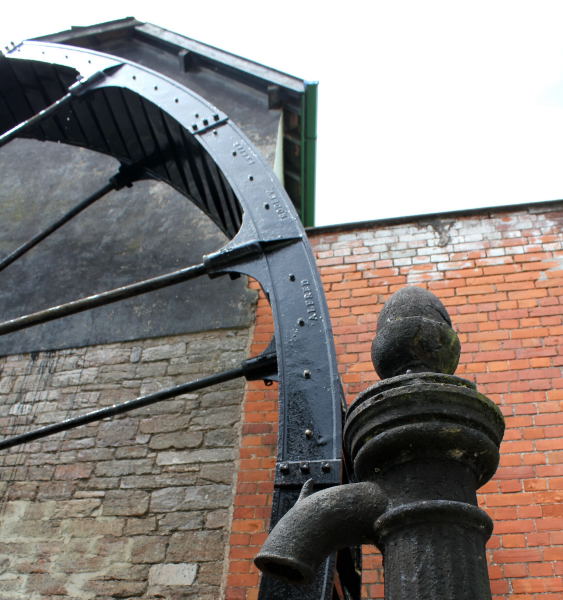 The gear wheel is in two halves, bolted together. However, it would have been cast in one piece, with deliberately weak places located at the intended split face. It would then have been split into two parts. It evidently suffered fractures in its working days - note the bolted-on repair brackets connecting spokes and rim. 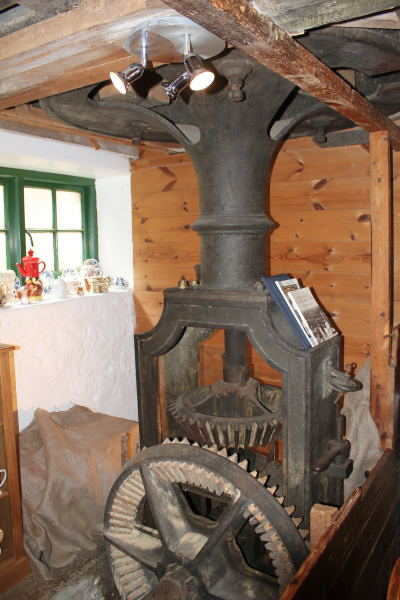 Unsuspecting visitors will be taken aback by the sight of a very large diameter working waterwheel in a town centre.

The pitchback wheel, made by Alfred Bodley of Exeter, was restored in recent years by volunteers. The gear drive to the mill is disengaged, but the mill machinery has been retained. Patrons of the tearoom can see the machinery on the ground floor, comprising a pair of cast iron supports for the millstones, and the shafting and gearing for driving the machinery. Unusually for a flour mill, the speed-increasing gears are of the double helical ('herringbone') type. The bevel gears which drive the mill stone shafts are more typical of those used in flour mills, having wooden cogs engaging with cast iron teeth. This arrangement offered quiet, spark-free operation. The unmachined cast iron herringbone gears are likely to have been noisy in operation.

The waterwheel is of the suspension type, but unlike most suspension wheels, the drive is taken not from gear teeth near the rim, but from a separate gear mounted on the shaft. Perhaps surprisingly for a wheel which transmits torque through its shaft, the wheel's spokes are relatively few in number, although of generous diameter.

Originally the water from the leat would have entered the pitchback wheel at about the '11 o'clock' position. It is now pumped to the wheel at a lower level.