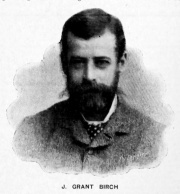 Of the firm John Birch and Co.

Died 1900 after accidentally drowning in the Yellow River China.[1]

JOHN GRANT BIRCH was born on 27th April 1817 in the Inland of Antigua, West Indies, where his father, Colonel J. F. Birch, was then stationed as Garrison staff Officer.

Coming to this country a few years later, he entered in 1867 the service of Messrs. Laird Brothers of Birkenhead, and remained with them until 1872.

He then started in business on his own account as engineer and iron merchant in Liverpool. During his early business career he held numerous agencies, and after a while turned his attention to export business and the representation of foreign engineers, which gave rise to repeated journeys round the world.

The main business of his firm was moved to London at the beginning of 1890, and its principal direction remained in his hands until his death. His work included a long series of important contracts specially connected with railway and marine engineering.

In 1896 he obtained, in conjunction with Mr. John S. Horner, a concession from the Egyptian Government for the construction of light railways, resulting in the formation of the present Egyptian Delta Light Railway Co. When the method of advance into the Soudan was under consideration, a detailed scheme for the construction of the railway across the desert was submitted to the Egyptian Government by him, and though the funds then available were insufficient for carrying it out at the time, the plan actually adopted in the following year was substantially that which he had proposed.

In September 1899 he left England for China for the purpose of surveying the country of the Upper Yangtsze district with a view to railway enterprise. This having been accomplished, he travelled to Lanchow, intending to make his say to Peking, via the Yellow River and the Great Wall. In descending the Yellow River he lost his life, through the wrecking of the raft on which he was travelling, on 24th Jane 1900, at the age, of fifty-three.

He became an Associate of this Institution in 1890.

"...regret to announce the death of Mr. J. Grant Birch, at the age of fifty-three. In this gentleman China has claimed another victim, and Britain has lost a loyal and most patriotic son. Letters written by him during his frequent journeyings in China show his intimate knowledge of Chinese politics, and foreshadowing later untoward events. In this last fatal journey he lost his life by drowning through the wrecking..."More