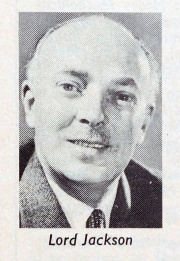 Born in Burnley, he was the only son of Herbert Jackson and his wife Annie Hiley.

Educated at Rosegrove Primary School and the Burnley Grammar School until 1922 and read electrical engineering at the University of Manchester until 1925. He obtained a Bachelor of Science first class, having previously won three different scholarships. Jackson studied then under Robert Beattie, graduating with a Master of Science in 1926.

After his education, Jackson became lecturer in electrical engineering first at the Bradford Technical College (now the University of Bradford) until 1929.

In the following year he worked as apprentice for the electrical company Metropolitan-Vickers.

Jackson lectured at the UMIST from 1930 and subsequently at The Queen's College, Oxford from 1933.

Afterwards he became again employed at Vickers working as research engineer for the next two years and then obtained a professorship in electrotechnics at his former university.

In 1946, he moved to Imperial College London as professor for electrical engineering.

Jackson was elected a fellow of the Royal Society in 1953 and joined again Vickers as director of its research and education department, a post he held until 1961.

For four years Jackson chaired the governing body of the Royal Technical Institute, Salford (now the University of Salford) until 1962. He returned to the Imperial College in 1961, heading its Department of Electrical Engineering until his death in 1970; for the last three years he was the College's pro-rector.

In 1962 he entered the South Eastern Electricity Board.

He gave the 1967 presidential address (Science, Technology and Society) to the British Association meeting in Leeds. He published a number of books and journal articles on his research.

In 1938 he married Mary, daughter of Robert Oliphant Boswall, a lecturer in mechanical engineering; they had two daughters

After receiving his BSc and DSc from Manchester University, and a DPhil from Oxford, he was appointed Professor of Electronics at Manchester in 1938. During the 1939-45 war, Lord Jackson served on many government committees and worked at the signals and radar research establishments of the Ministry of Supply. In 1946 he became Professor and Head of the Electrical Engineering Department at Imperial College and seven years later joined Metropolitan-Vickers as Director of Research and Education.

Along with his work for education, Lord Jackson contributed a great deal to the engineering community. He was President of IEE in 1959. He served as Chairman of the Television Advisory Committee and of the Engineering Advisory Committee to the BBC ; Chairman of the Committee on Manpower Resources for Science and Technology ; a member of the Council for Scientific Policy from 1963-1968; and a member of the CEI Parliamentary Advisory Committee in 1970. The nation has reason to be grateful for his far-sighted approach to manpower problems and his influence will be felt for many years to come. His services were rewarded with a knighthood in 1958 and with a life peerage in 1967.

A quiet, courteous and generous man, Lord Jackson's death will be keenly felt by his many friends and colleagues. Our profession, and this Institution, have lost a true friend.