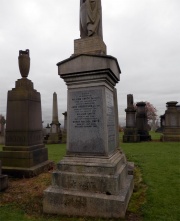 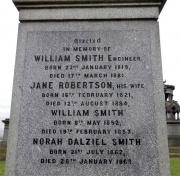 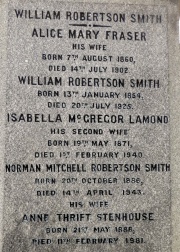 WILLIAM SMITH was born in Paisley in January 1819.

After leaving school he spent two years in a lawyer's office, and then went into his father's works at Paisley, to learn the business of millwright and engineer. His father, who had a considerable reputation as a maker of agricultural, corn, flour and saw-mill machinery, died early in 1838; and Mr. Smith, though only nineteen years of age, joined his brother, Mr. Alexander Smith, in taking up the business under the firm of A. & W. Smith & Co.

Owing to the increased demand for agricultural machinery about 1840, the business extended very rapidly; and in 1855 the firm erected larger works in Glasgow, to give greater facilities in manufacture. They then added to their business the manufacture of sugar-making machinery.

In 1861 Mr. Smith went to Mauritius, with the view of getting a more perfect knowledge of the machinery required on the sugar estates; and the business in this department largely increased in consequence.

In 1878 he visited the West Indies with a similar view, and with much success.

In 1880 he left the firm, and commenced business with two of his sons under the style of William Smith & Sons; and was just erecting new works in Particle, Glasgow, when his death took place very unexpectedly and suddenly on 17th March 1881.

He took a great interest in the Trades House of Glasgow, and was elected to the office of Deacon Convener in 1874, this being the highest honour the Trades House can confer upon any member.