Difference between revisions of "William Fairbairn and Sons" 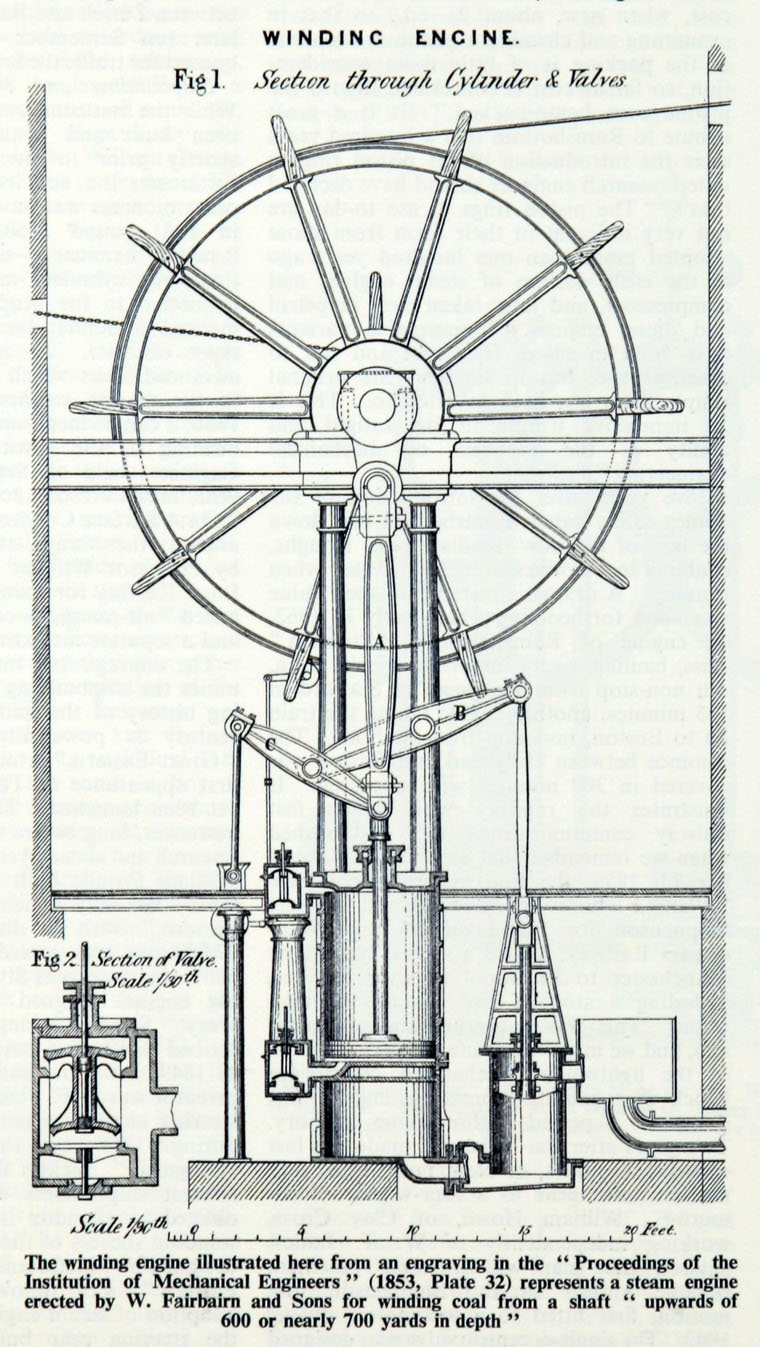 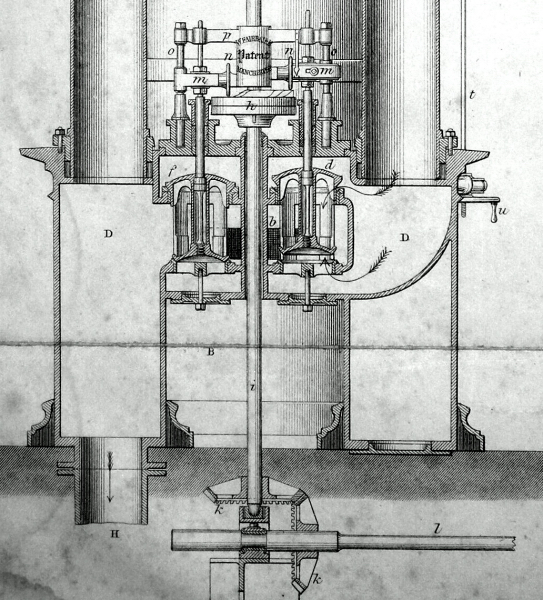 Arrangement of valves at top of steam engine cylinder

Crane built in 1862 by Fairbairn, at Helsingør (Denmark)

William Fairbairn & Sons of Manchester and Millwall (London), mechanical and and civil engineers

1832 Formerly Fairbairn and Lillie of Manchester; the name was changed when the partnership with Lillie was dissolved; Lillie set up his own business as a millwright. One cause of friction appears to be that William Fairbairn wanted to expand the shipbuilding side of the business, which initially involved building iron boats at the works in Manchester.

1835 William Fairbairn established works for shipbuilding at Millwall, east London, in partnership with an old pupil, Andrew Murray, on the understanding that Mr. Murray was to be the managing partner of that branch. This was the earliest iron-shipbuilding yard of any size in England.

1837 A boilermakers' strike induced Fairbairn and manager Robert Smith to develop a steam-powered machine for riveting boiler plates. Fairbairn drove the devlopment, but he may well have got the idea from elsewhere: John Bourne reported that he had used machine-riveting in Dublin in 1836, and that his then foreman had moved to Fairbairn's. Smith files a patent in 1836, but it was not enrolled. In 1837 Fairbairn paid for another patent, in Smith's name. In 1840 the company brought out an improved version, on rails [1].

1838 Fairbairn & Sons were advertising the advantages of their riveting machine, in terms of improved quality and markedly reduced riveting time, in October 1838 [2]

1839 The company's attention broadened to railway locomotives and they produced four 0-4-0s for the Manchester and Leeds Railway. Their first designs were of the four-wheeled "Bury" type. Generally they built to the design of the customer or similar to those being produced by Edward Bury and Co and Sharp, Roberts and Co.

In the 1840s, Robert Stephenson retained Fairbairn and Hodgkinson as consultants on the Menai Straits bridge. Fairbairn conceived the idea of a rectangular tube and conducted tests on prototypes in his Millwall shipyard and at the site of the bridge.

1844 The company left Millwall, where two thousand men had been employed.

Undertook many engineering schemes, experimented on the properties of iron, and, to meet a strike of his workmen, introduced the riveting machine, which was a great advance in the manufacture of boilers.

In all, Fairbairns produced over sixty-nine locomotives for the M&LR, their main customer, but they also built for the Little North Western Railway and for lines in Ireland. Their production was mainly lightweight 0-4-0, then 2-2-2, 2-4-0 and 0-4-2 engines typical of the day.

1850 William Fairbairn patented a crane with a curved jib made of riveted plates. [6]. A number of examples have survived (see photograph of a crane at Bristol Harbour).

Soon after, six large cranes were made for Keyham Dockyard. A description of them was given by Mr. Fairbairn to the Institution of Mechanical Engineers, and was published in their Proceedings for 1857. Each crane was calculated to lift 12 tons to a height of 30 feet from the ground, and to sweep a circle 65 feet in diameter. A few years later an even larger one was ordered for the same place to lift 60 tons 60 feet high, with a circle of 106 feet diameter.

1853 Completion of Titus Salt's Saltaire Mill (Salt's Mill). Fairbairn was responsible for the structural ironwork and mechanical aspects, including two steam engines with cylinders 50" dia and 7 ft stroke. The engines had expansion gear like that illustrated above. However, the valves were difficult to manufacture and to maintain in good order, and the cylinders were replaced after about 10 years with the adoption of Corliss valve gear [7]

1853 Listed as Steam engine manufacturers, iron steam boat builders, millwrights, boiler makers, and iron and brass founders of Canal Street, Mill Street and Great Ancoats street. There is a description of their works in the 1853 Directory of Manchester and Salford

They built some larger engines to the design of J. E. McConnell for the Southern Division of the London and North Western Railway.

In 1859 William Fairbairn, Junior, retired, leaving Thomas Fairbairn the sole proprietor, after which the works were carried on under the title of Fairbairn and Company.

In 1862 they built some 2-2-2 locomotives to the design of the Great Eastern Railway. These were their last locomotives.

1863 The locomotive building part of the business was sold to Sharp, Stewart and Co. They had built more than 400 locomotives by this date.

About 1864 they became the Fairbairn Engineering Company

1864 Fairbairn's received an order from the USA for a large railway bridge to cross the Connecticut at Warehouse Point, between Hartford and Springfield. Length 1525 ft, 17 spans, weight of ironwork, including tracks, approx 800 tons. At the time, local US firms were pre-occupied with Civil War-related work. The order was placed with Fairbairn's in or about January, with delivery anticipated in December 1864. However, the timescale necessitated having part of the work done at the London Engineering and Iron Ship Building Co. 'In about a year the bridge was shipped from Liverpool and London, and in June 1865, work upon its erection was begun' [11]. The construction of the bridge was described in some detail in 'Engineering' in 1866 [12]

1866 'A few years ago the works of Messrs. Fairbairn and Sons was carried out at four separate places, at some small distance from each other, in the Ancoats district of Manchester. Since the formation of the limited company this has been altered, and all the operations are now concentrated in the engine side and the former boiler yard. To this last portion has been removed the present very large foundry. A large fresh plot of ground has here been purchased, affording an extensive area, now being covered by new workshops. Very considerable contracts for bridge work, principally for Indian lines, are now being executed by the company'

1920 A history of the early years of the firm was published in The Engineer. Read it HERE.

From 'Short Histories of Famous Firms' by Ernest Leopold Ahrons The Engineer - 1920/02/20.

During the period from about 1845 until the end of the year 1862, when their last locomotive was built, Messrs. W. Fairbairn and Sons were among the best-known locomotive builders in this country. Their first engines for an English railway company, the Manchester and Bolton, were put to work in April 1839 and by the time the works were closed they had constructed rather more than 400 locomotives. Messrs Fairbain did not, however confine themselves to locomotive building; in addition they did a considerable business in bridge building, and general engineering and millwrights’ work formed one of the main portions of their trade. It is just possible that the firm had too many irons in the dire, and that that was party the cause of its premature disappearance.

A superb account of Fairbairn's life and work, and of the company's activities and products, has been written by Richard Byrom, and was published in October 2017[13]

Liquidation of Canal Street Works in 1875

An article about Fairbairn's Canal Street works appeared in The Engineer, 13th June 1856. The writer explained, in diplomatic terms, that Fairbairn’s works did not represent the epitome of modernity or efficiency. It was emphasised that their business was heavy engineering, not tool making. There were some modern machines from neighbours John Hetherington and William Collier, but much machinery was evidently past its first flush of youth, even in 1856. 'Somewhat venerable' was the description used.

The writer noted that Fairbairn was experimenting with something called Nova Scotia Iron for mortars. A 13-inch mortar barrel was being machined 'with an extemporised boring apparatus of a very simple and primitive character'. The material was presumably a form of cast iron, 'Judging from the stiffness and tenacity of the borings, the Nova Scotia iron promises to be something very superior; but for the darkness of the colour, one might easily mistake them for malleable iron'.

At the time of the visit, twelve locomotives were under construction for Sweden, two for Canada, and several for Australia. The article also included details of a recently-built locomotive for local use. In an effort to provide some compliance to accommodate track curvature and unevenness, they had incorporated vulcanised rubber pads in the hornblocks to allow some lateral axle box movement, and also in for the bearings in the connecting and coupling rods. Also going through the shops were: a 100 ft span bridge for the Valencia Railway (Spain), a floating landing stage for Liverpool, iron piles for Guernsey harbour, large foundry moulding boxes made from boiler plate for Woolwich Arsenal, and 40 HP stationary steam engines for Russia and Spain.

The article mentions that the fitting shop had no fixed cranes, but instead was served by overhead cranes which travelled the length of the shop. However, the two cranes each served only half the width: the rail for the outboard end of each crane was fixed to the wall, while the rails for the inboard ends were on a beam running down the centre of the shop. Thus it was difficult to pass a load from one side of the shop to the other. The article said that this was not a serious inconvenience, as the work (at that time) principally involved locomotives, which were assembled on rails laid in the shop.

Some Apprentices, Pupils and Employees

The Fairbairn Steam Crane at Bristol

Built in 1878 by Stothert and Pitt to the William Fairbairn patent.

The oldest surviving exhibit of its type in Britain and a scheduled ancient monument.

The crane's strength lay in its jib, which was made of wrought-iron plates riveted together to make an immensely strong tubular-section girder. It could lift up to 35 tons (35.56 tonnes) and was meant to supplement the lifting ability of the Docks' other 17 cranes.

The crane has now been restored to full working order and is the responsibility of Bristol's 'M Shed'. [26]

Examples of cranes built to Fairbairn's patent may be found in the section Fairbairn Crane.