Grace's Guide is the leading source of historical information on industry and manufacturing in Britain. This web publication contains 144,951 pages of information and 230,620 images on early companies, their products and the people who designed and built them. 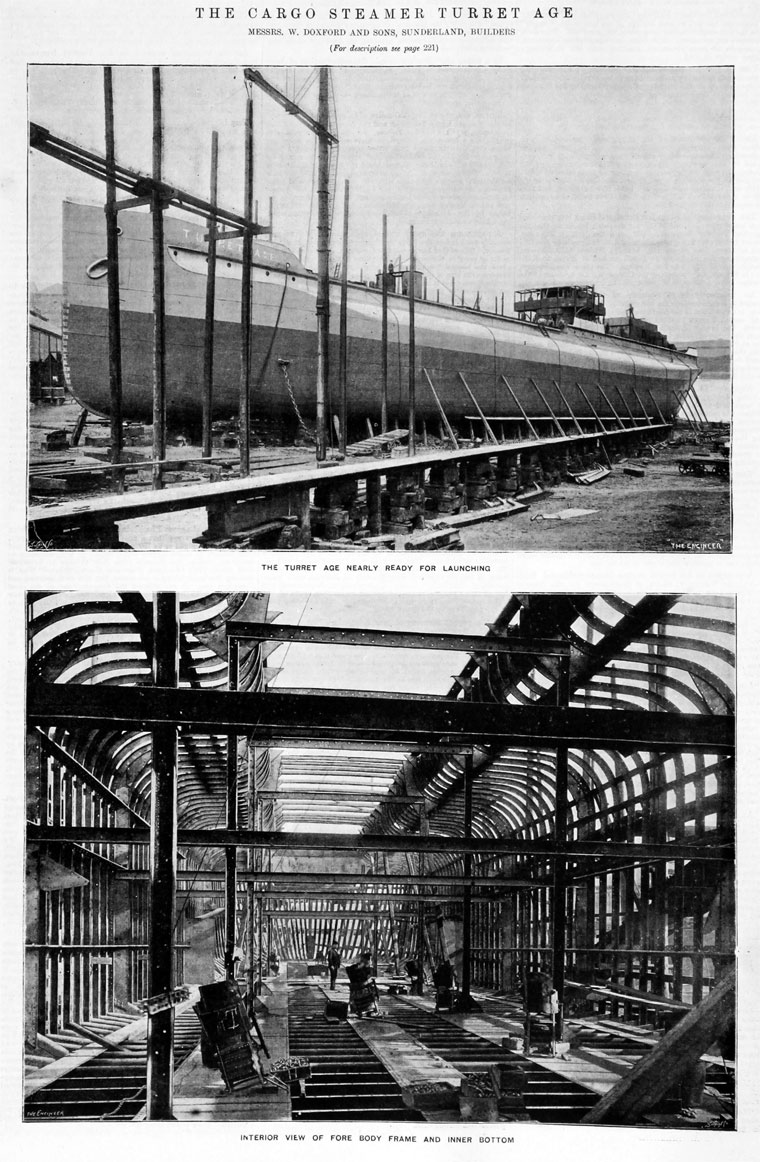 Model of turret ship Queda, on display at Sunderland Museum 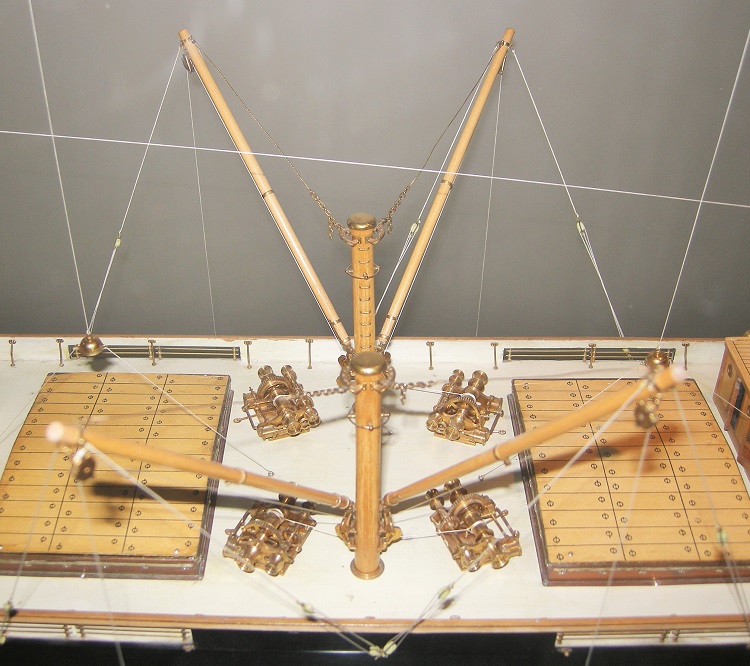 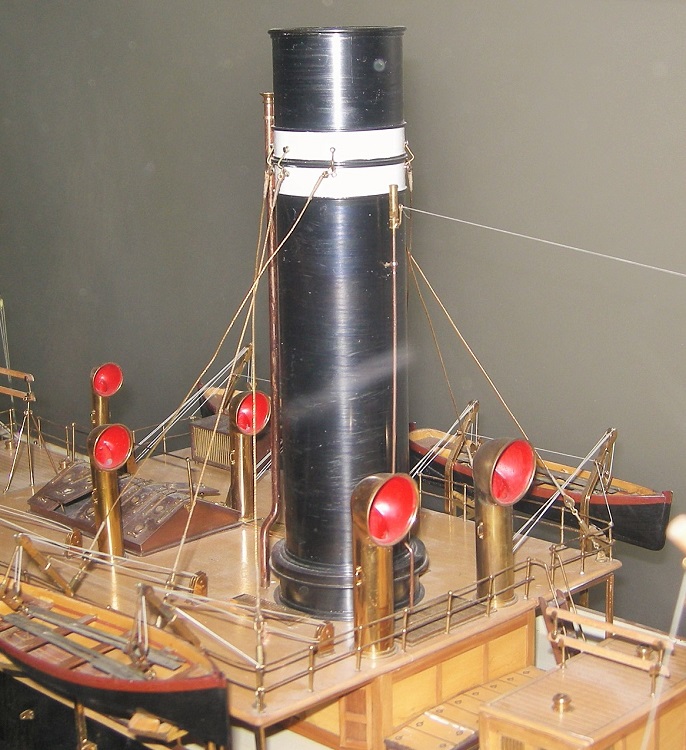 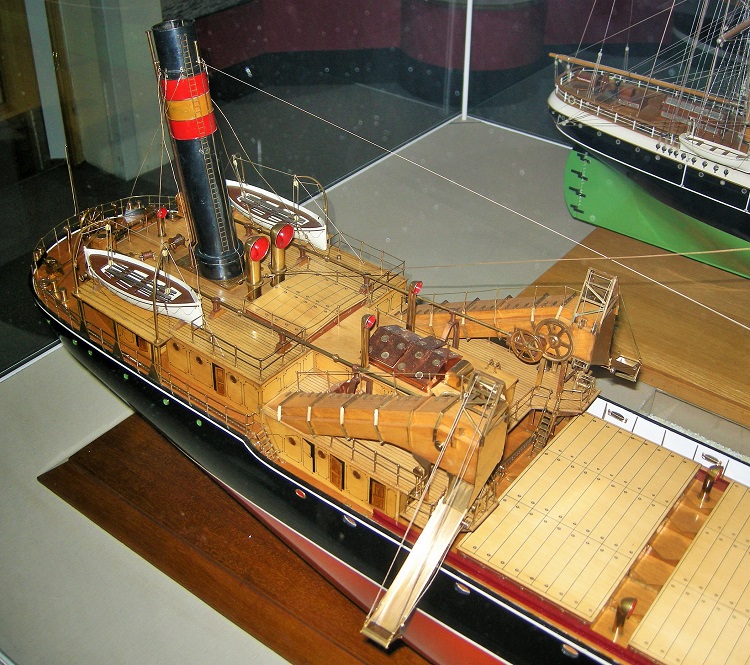 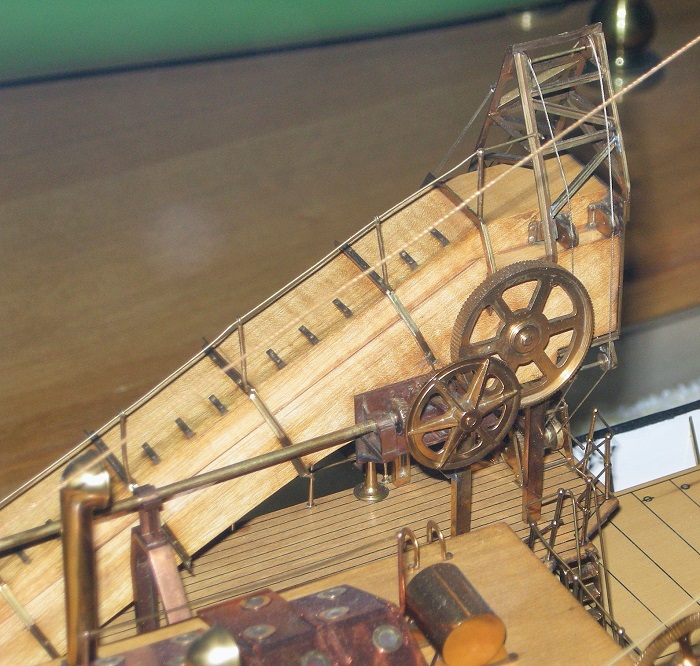 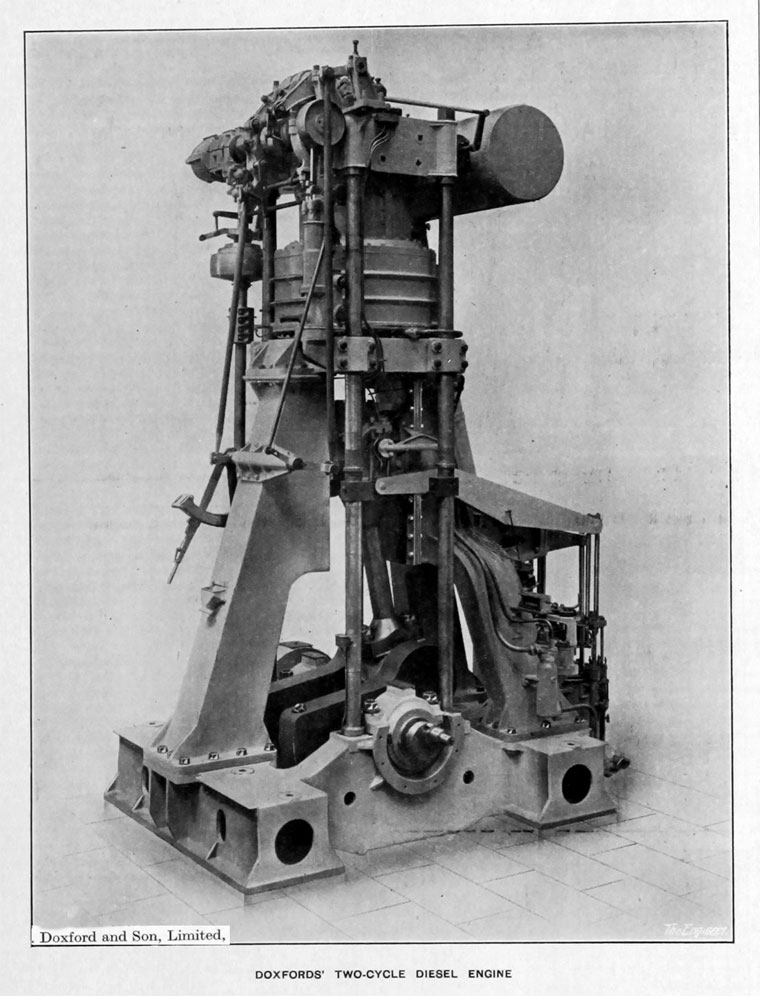 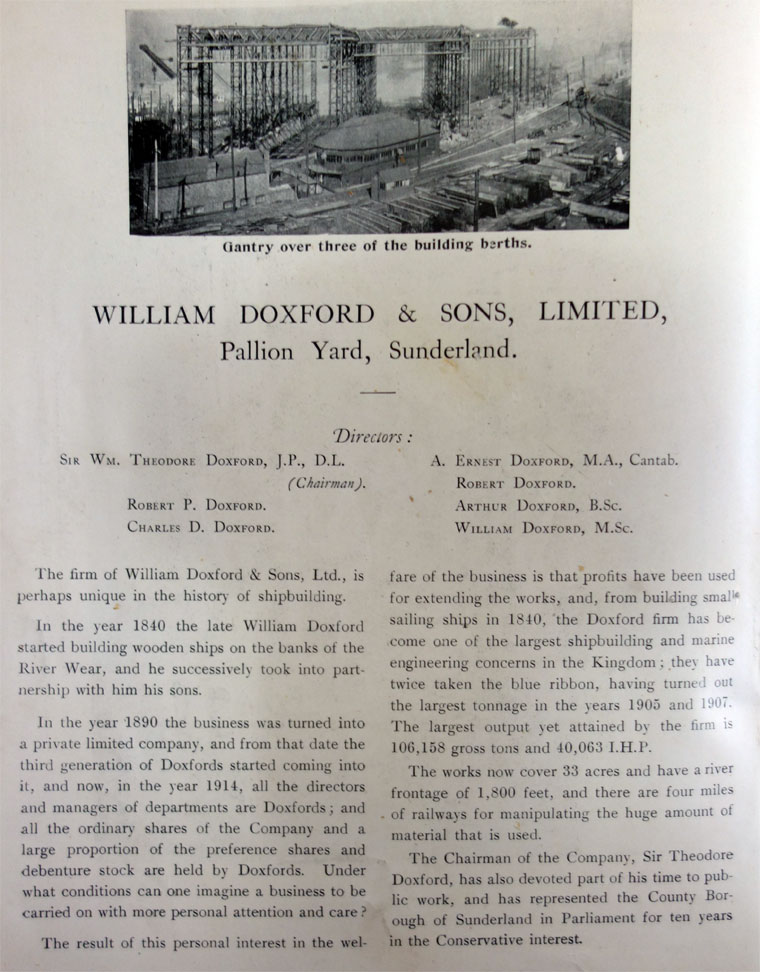 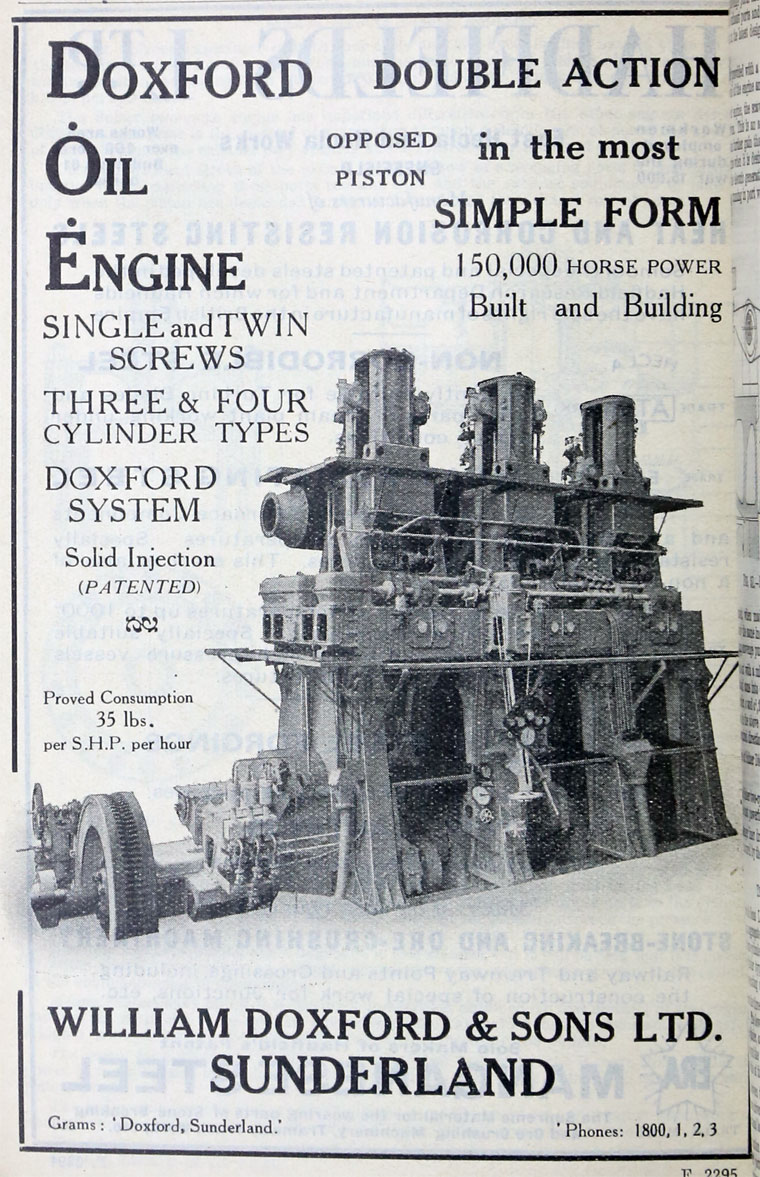 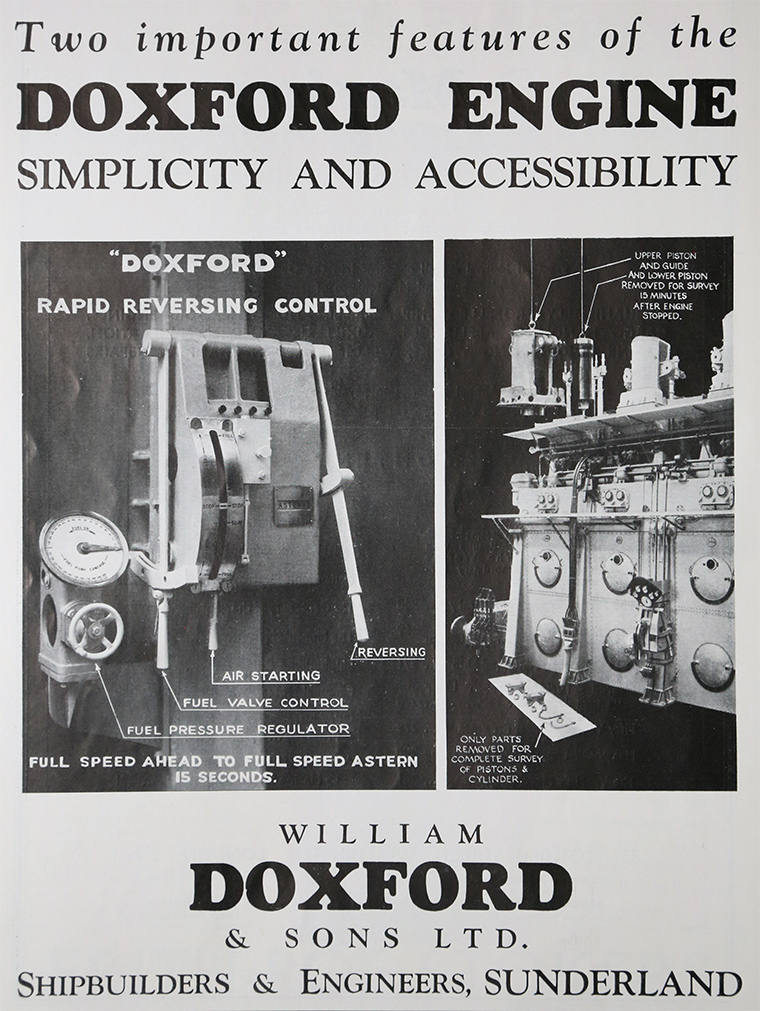 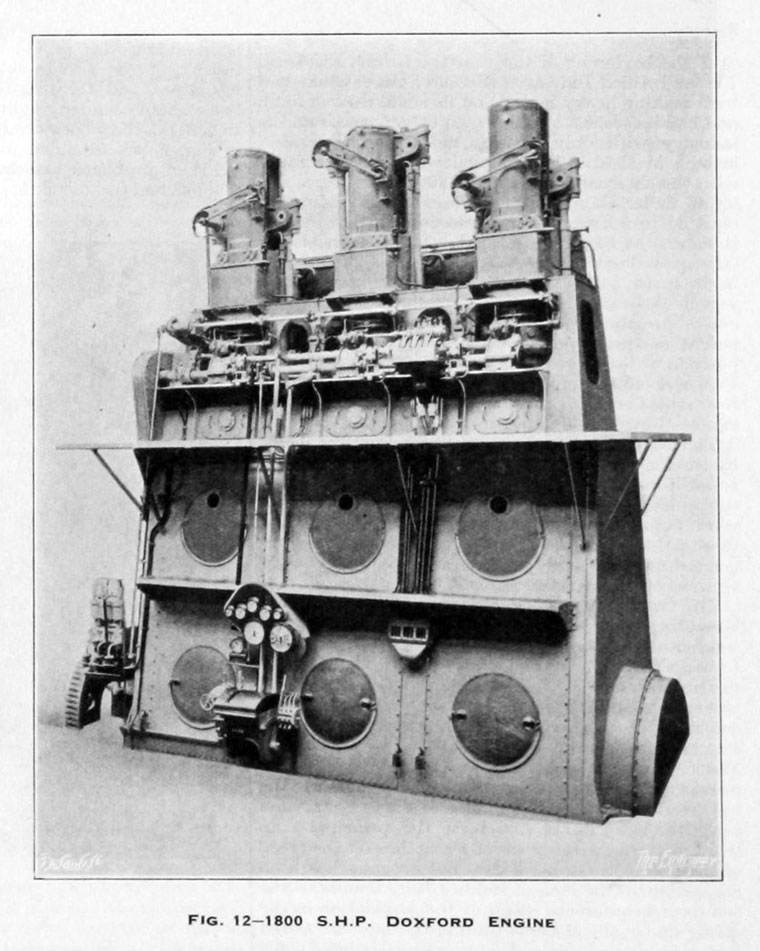 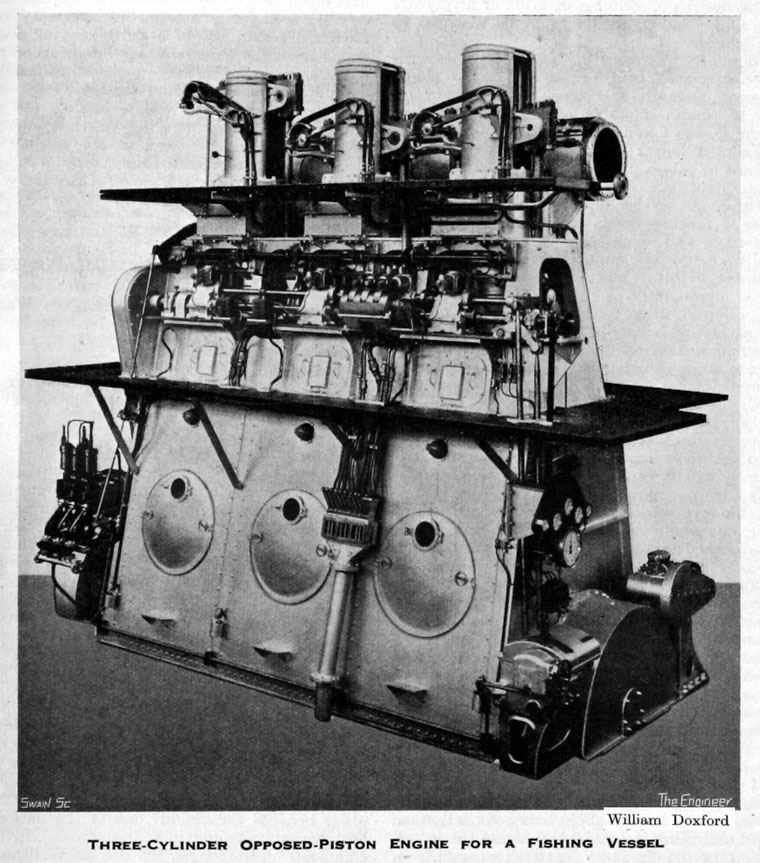 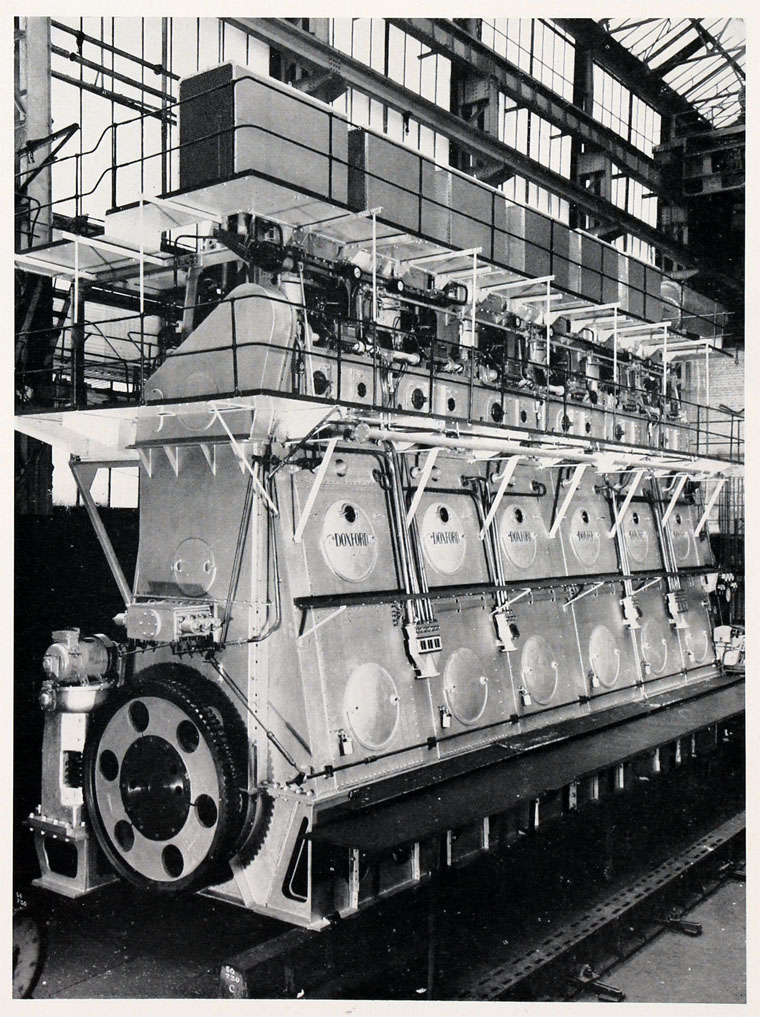 W. Doxford and Sons Ltd, often referred to simply as Doxford, was a British shipbuilding company established in 1857 by William Doxford. Based in Pallion, Sunderland, on the River Wear in Northeast England. [1]

1840 William Doxford, Senior began building wooden ships at Cox Green on the upper reaches of the Wear. Although there was a slump in wooden shipbuilding in the 1840s, Doxfords survived.

1857 Moved to larger premises down river, at Pallion, which was west of his later shipyard.

William Doxford, Junior started to work in his father's yard.

1864 The yard started to build iron ships which brought a significant increase in the level of business for Doxfords.

1870 A five berth yard was laid down and it was known as the West Yard. From 1872 onwards Doxford received the first of many Admiralty orders and went from strength to strength. In the 1880s Doxford's were known for their fast sailing clippers and liners. Doxford added marine engines and boilers to the repertoire of the business. They became renowned for compound steam engines.

1878 Erected engine and boiler shops to build their own engines with a younger son, Robert Doxford, in charge of it; all four sons were involved in the management of the business. By this time Doxfords was probably the leading shipyard on the River Wear.

1882 William Doxford senior died; the business was taken over by his four sons: William Theodore Doxford, Alfred Doxford, Robert Pile Doxford and Charles David Doxford in partnership. William Theodore was in overall charge of the yard.

1887 The firm installed oil-burning boilers in a torpedo boat but this did not capture the Admiralty's interest.

1887 'On Saturday afternoon Messrs W. Doxford and Son, of Sunderland, launched a magnificent steamer, which is to be engaged in the China telegraph service. The vessel is provided with all the apparatus for the laying down and the repairing of submarine cables, and she can also be of use as a naval cruiser, being provided with six guns. The dimensions of the vessel are as follow :—Length, 320 feet; breadth, 32 feet; depth, 20 feet. She will be provided by the builders with a set of triple expansion engines, indicating 1,100 power, which are calculated drive at 13 knots an hour. The name of the vessel is the Fee-Chue.' [2]

1891 Became a limited liability company with a capital of £200,000, all owned by the Doxford family.

1891 The first ship completed after incorporation was Hawkes Bay followed by three for The Clan Line Steamers Ltd, Glasgow: Clan Line were the most important customer for the yard.

1892 Doxford's began building a number of experimental designs among which was the "Turret". This had a narrow turret of approx. five feet and half the breadth of the ship superimposed on a hull of normal proportions. The main deck was renamed the "harbour deck" because this is where the ship was secured while in harbour. The top of the turret was called the turret deck. The design lacked stability at large angles of roll and was unable to withstand rolling forces due to the loss of buoyancy on the smaller hull side. Consequently, the centre of gravity had to be kept low when the ship was loaded with a full cargo. Two ships; the Clan Ranald and the Clan Gordon were lost due to this lack of stability. There were others too. Doxford's had to establish their own company to build the prototype Turret as underwriters and Lloyds were opposed to the new design on safety grounds. The Turret Steam Shipping Co built the first prototype, Turret, and she sailed on her maiden voyage in this year.

1894 Cargo Steamer 'Turret Age'. Article and illustrations in 'The Engineer'. [4]

1896 After some resistance from other shipowners the first orders for the turret ship were made and, over the next 10 years, Clan Line placed orders for 30 ships of varying sizes.

1901 A fire destroyed the Engine Works; they were rebuilt and modernised.

1904 the East Yard was built, and the 3 extra berths helped Doxford’s to win the blue riband in 1904 and 1907 for the highest production rate in the world.

1905-07 The yard had the highest production of any shipyard in the world.

1906 Began development of a marine diesel engine under the engineer K. O. Keller. These engines used gas, which was soon discovered to be unsuitable for ship propulsion.

1909 New type of self-discharging collier 'Pallion', constructed to Doxford's patent, described in 'The Engineer'[5]. This was soon sold to Gebruder Sauber and renamed Emma Sauber. In 1921 it was renamed 'Herbert (Herman?) Sauber'.[6]. See photos above of model in Sunderland Museum.

1910 Board of Trade rules were changed which led to the "Turret" design falling out of favour for the open shelter-decker. The open/closed shelter-decker became the standard cargo ship design until replaced by the bulk carrier in the 1960s.

1911 Orders continued to flood in as the freight market picked up. Up to the outbreak of World War One, 16 turret ships were made by the yard.

1913 First opposed-piston engine was built. This engine was introduced into service in the interwar period.

1913 The first turbine-powered cargo ship in the world, Cairnross, was completed by the Yard in January.

1914 Shipbuilders, Marine Engineers, Brassfounders and Boilermakers. Builders of all types of Steamers up to 20,000 t D W, Torpedo and other High-speed Vessels either with Reciprocating of Turbine Engines, Patent Belt-Discharging Vessels for Coal or Ore, Internal Combustion Engines and Floating Oil Storage. [8]

1916 Sir William Theodore Doxford died, having been in charge of the yard for 34 years. His son, Albert Ernest Doxford, succeeded him as Managing Director.

WWI A total of 21 torpedo boat destroyers, five merchant ships, 19 "WAR" standard types, nine "A" type, three "B" type and seven larger "F" type ships were manufactured by the yard between the end of the War and up to the end of 1920.

1919 A majority holding in the company was taken by the Northumberland Shipbuilding Co and the Sperling Group. The Doxford family interest was sold and Albert Ernest Doxford retired.

1919 Doxfords made available the first commercial opposed-piston engine. Unlike other engine manufacturers Doxford did not actively seek licensees for its engine but was willing to grant this right on application, with no limit to the number of licenses. An initial payment of £10,000 plus a royalty of £1 per bhp was required.

1920 The collapse of the freight market led to the cancellation of 19 of 33 orders with the remaining ships losing three quarters of their value.

1924 Vickers considered taking a licence for the Doxford diesel engine but considered it too expensive.

1924 The Sperling Group collapsed, and the Doxford yard closed down after the last launch in September, and did not reopen until 1927. From this point onwards, cheaper triple expansion steam engines were manufactured, along with newer 4 cylinder opposed piston engines.

By the end of the 1920s Doxford had four British licensees for its diesel engine and two from overseas.

1931 The yard closed again. The company worked on producing an economical motor-tramp, which although it had a higher building cost, was offset by lower operating costs.

1934 The Doxford Economy tramp design as it was known, gave a service speed of 10 knots on 6.5 tons of oil a day. The shipyard used electric welding of plates for the first time. Sutherland, which was the first of the new design, was launched on 6th December and was followed by 30 others.

1938 An improved Doxford Economy tramp design was manufactured giving 12 knots on 9.5 tons of oil per day. 85 of this design were built during the war up to 1954.

1939 By the end of the 1930s the number of diesel engines built by its licensees exceeded those constructed by Doxfords.

1946 An extra fitting out quay was acquired in Palmers Hill from John Dickinson and Sons. The company began building vessels for private contract again.

From 1946-66 the Pallion Yard of Doxford completed 123 ships, with 23 of these being tankers. The Doxford main 3-cylinder oil engine was licensed around the world and was one of the most popular large marine diesel engines in the world.

1961 Engaged as shipbuilders and general engineers. [9]

1966 The large 9-cylinder Doxford "J" oil engine of 30,000 bhp, the first of its type, was fitted into the tanker North Sands. This was done by the North Sands yard and was a precursor to a full merger of the yards.

1973 The old East Yard at Pallion was demolished and replaced with a gigantic shipbuilding hall where two ships could be built at the same time, side by side. The Doxford and Sunderland Group was renamed Sunderland Shipbuilders Ltd on 5th March.

1980 The last Doxford oil engine was installed on the bulker Canadian Pioneer. The engine was no longer in demand, and the Pallion Engineering Works became a spare-part supplier only.