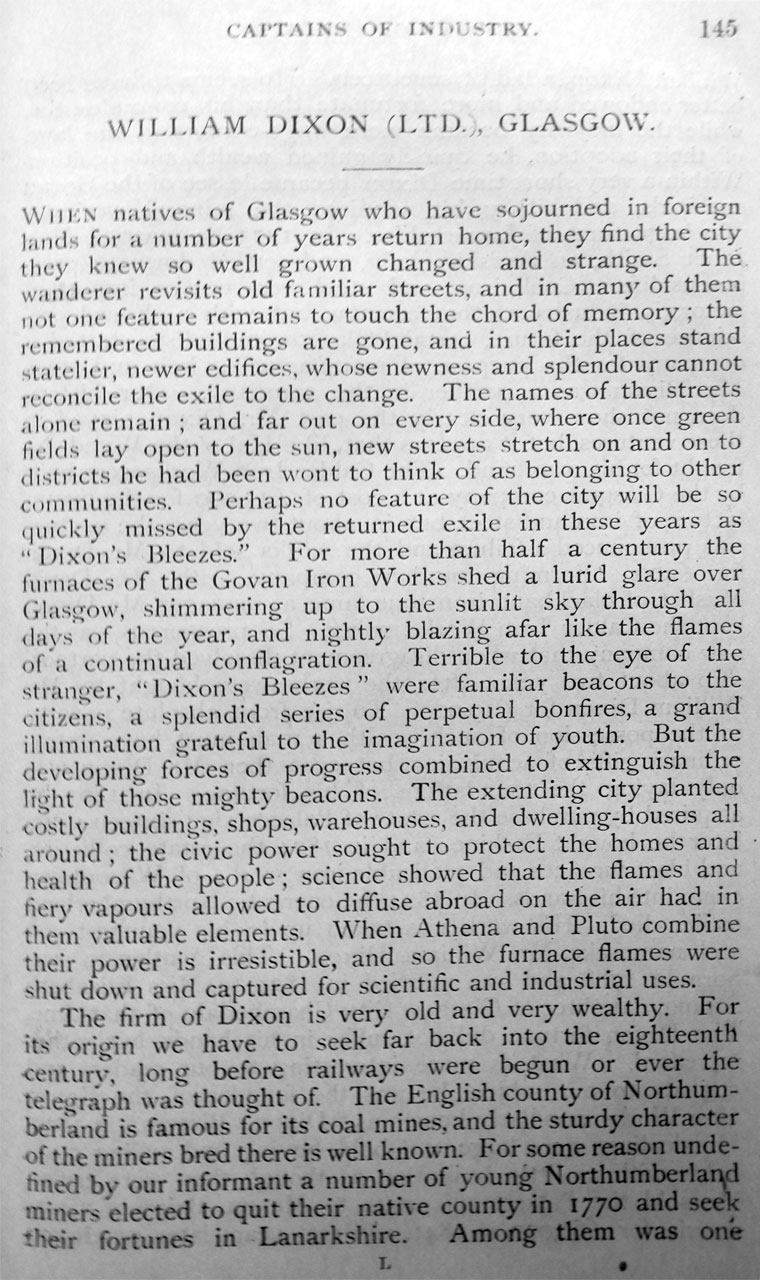 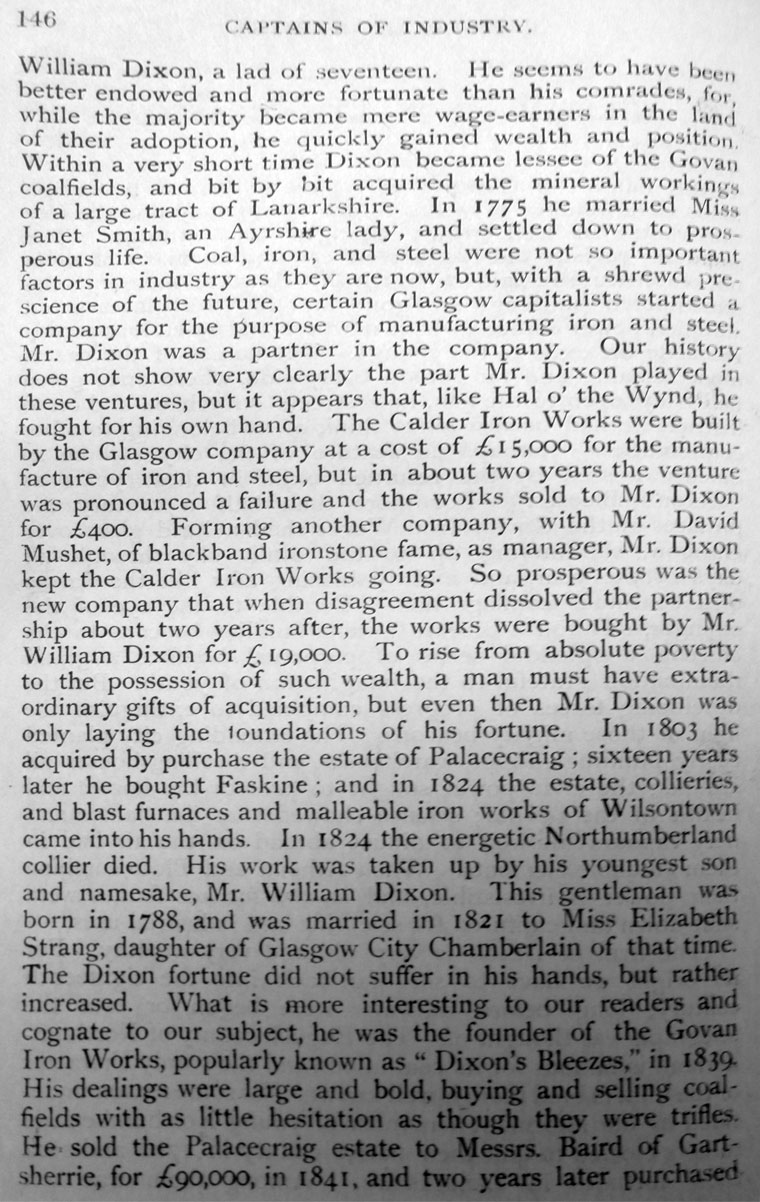 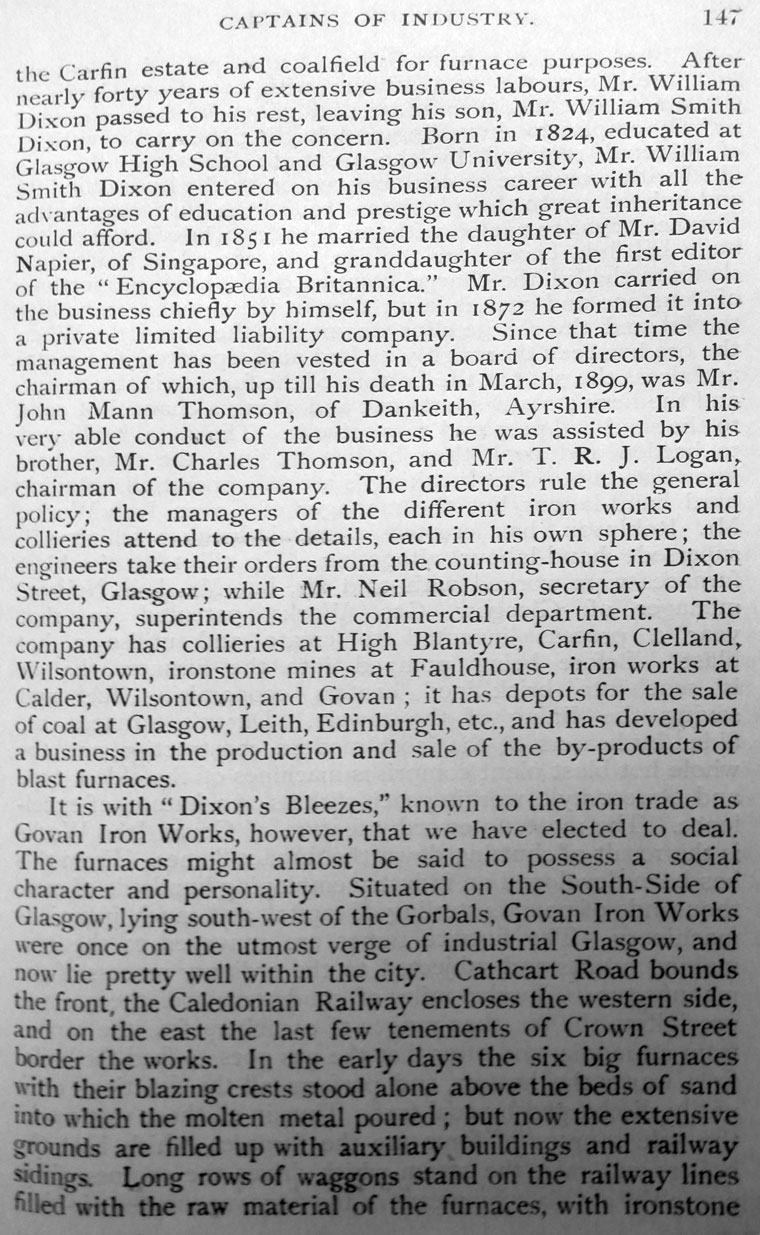 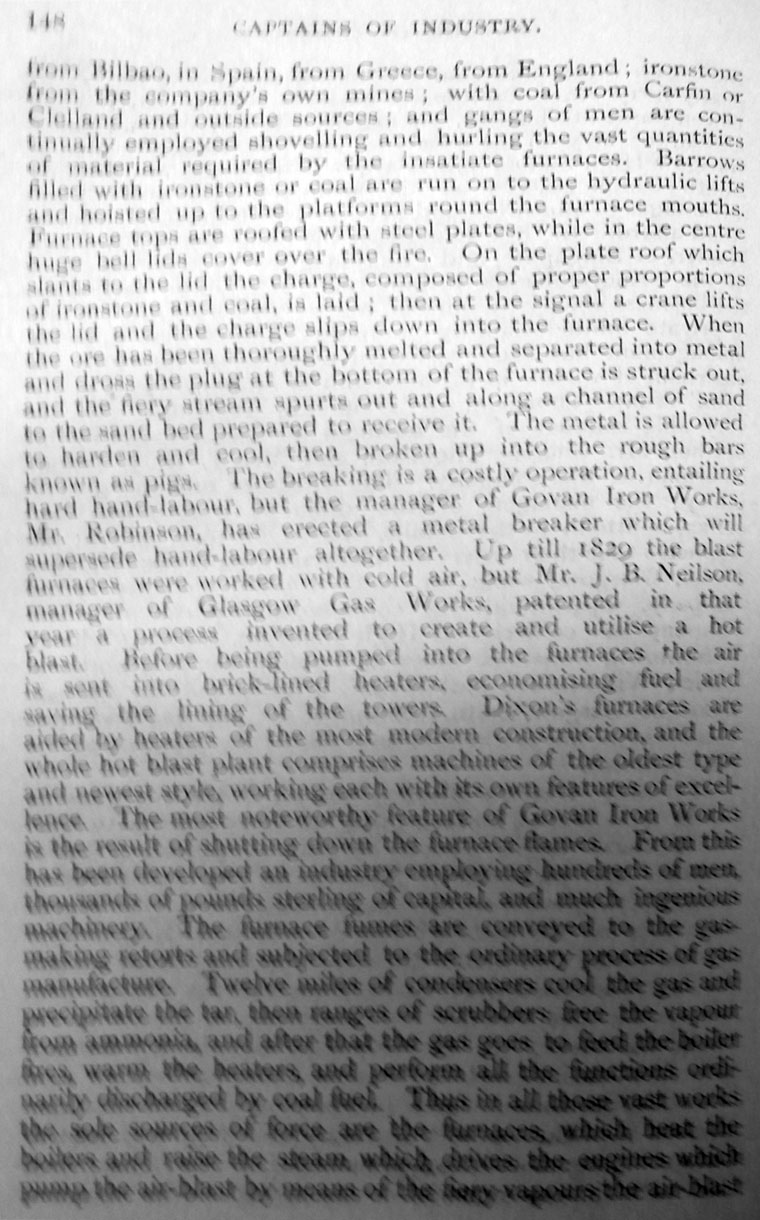 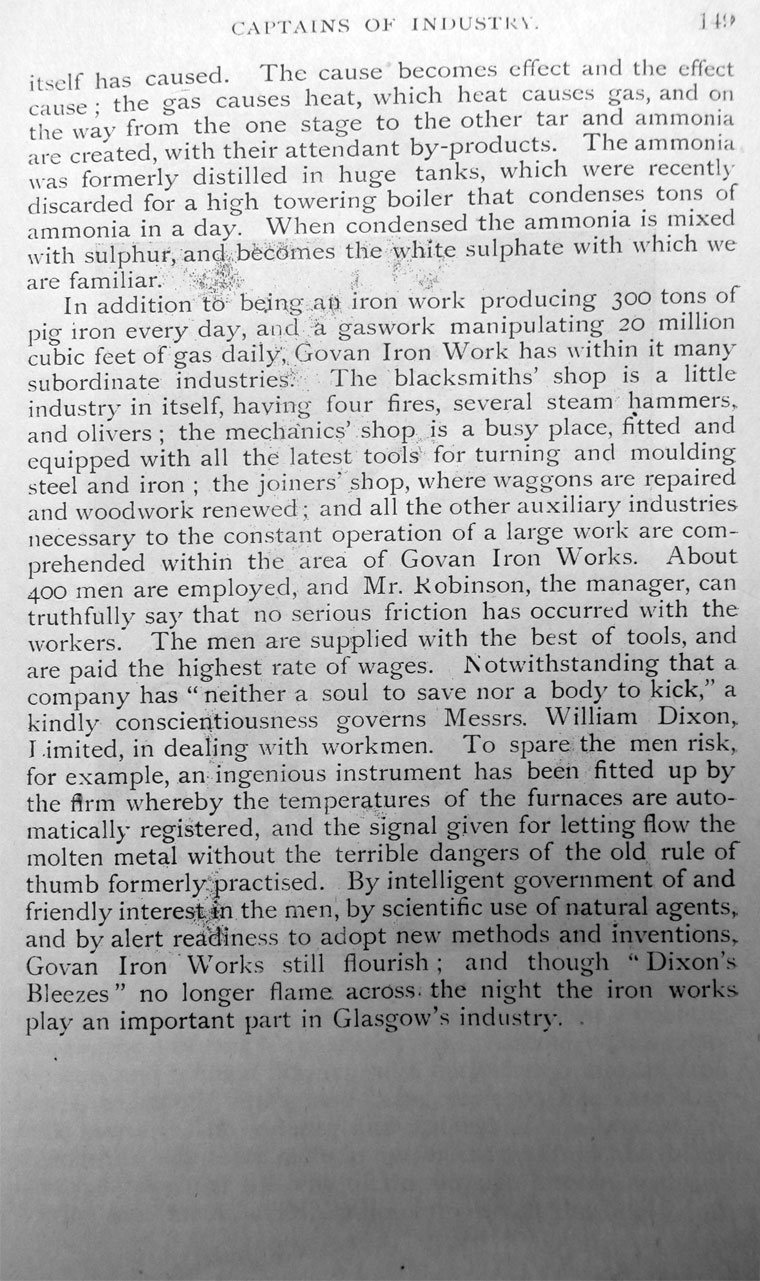 Note: This is a sub-section of William Dixon

When natives of Glasgow who have sojourned in foreign land, for a number of years return home, they find the city they knew so well grown changed and strange. The wanderer revisits old familiar streets, and in man)' of them sot one feature remains to touch the chord of memory; the remembered buildings arc gone, and in their places stand statelier, newer edifices, whose newness and splendour cannot reconcile the exile to the change. The names of the streets atone remain; and far out on every side, where once green fields lay open to the sun, new streets stretch on and on to districts he had been wont to think of as belonging to other communities.

Perhaps no feature of the city will be so quickly missed by the returned exile in these years as "Dixon's Bleezes." For more than half a century the furnaces of the Govan Iron Works shed a lurid glare over Glasgow, shimmering up to the sunlit sky through all day, of the year, and nightly blazing afar like the flames of a continual conflagration. Terrible to the eye of the stranger, "Dixon's Breezes" were familiar beacons to the citizens, a splendid series of perpetual bonfires, a grand illumination grateful to the imagination of youth. But the developing forces of progress combined to extinguish the light of those mighty beacons. The extending city planted costly buildings, shops, warehouses, and dwelling-houses all around; the civic power sought to protect the homes and health of the people; science showed that the flames and fiery vapours allowed to diffuse abroad on the air had in them valuable elements. When Athena and Pluto combine their power is irresistible, and so the furnace flames were shut down and captured for scientific and industrial uses.

The firm of Dixon is very old and very wealthy. For its origin we have to seek far back into the eighteenth century, long before railways were begun or ever the telegraph was thought of. The English county of Northumberland is famous for its coal mines, and the sturdy character of the miners bred there is well known. For some reason undefined by our informant a number of young Northumberland miner elected to quit their native county in 1770 and seek their fortunes in Lanarkshire. Among them was one William Dixon, a lad of seventeen. He seems to have been better endowed and more fortunate than his comrades, while the majority became mere wage-earners in the land of their adoption, he quickly gained wealth and position.

Within a very short time Dixon became lessee of the Govan coalfields, and bit by bit acquired the mineral workings of a large tract of Lanarkshire. In 1775 he married Miss Janet Smith, an Ayrshire lady, and settled down to prosperous life. Coal, iron, and steel were not so important factors in industry as they are now, but, with a shrewd prescience of the future, certain Glasgow capitalists started a company for the purpose of manufacturing iron and steel. Mr. Dixon was a partner in the company. Our history does not show very clearly the part Mr. Dixon played in these ventures, but it appears that, like Hal o' the Wynd, he fought for his own hand.

The Calder Iron Works were built by the Glasgow company at a cost of £15,000 for the manufacture of iron and steel, but in about two years the venture was pronounced a failure and the works sold to Mr. Dixon for £400. Forming another company, with Mr. David Mushet, of blackband ironstone fame, as manager, Mr. Dixon kept the Calder Iron Works going. So prosperous was the new company that when disagreement dissolved the partnership about two years after, the works were bought by Mr. William Dixon for £19,000. To rise from absolute poverty to the possession of such wealth, a man must have extraordinary gifts of acquisition, but even then Mr. Dixon was only laying the inundations of his fortune.

In 1803 he acquired by purchase the estate of Palacecraig; sixteen years later he bought Faskine; and in 1824 the estate, collieries, and blast furnaces and malleable iron works of Wilsontown came into his hands. In 1824 the energetic Northumberland collier died. His work was taken up by his youngest son and namesake, Mr. William Dixon. This gentleman was born in 1788, and was married in 1821 to Miss Elizabeth Strang, daughter of Glasgow City Chamberlain of that time. The Dixon fortune did not suffer in his hands, but rather increased. What is more interesting to our readers and cognate to our subject, he was the founder of the Govan Iron Works, popularly known as "Dixon's Bleezes," in 1839.

His dealings were large and bold, buying and selling coalfields with as little hesitation as though they were trifles. He sold the Palacecraig estate to Messrs. Baird of Gartsherrie, for £90,000, in 1841, and two years later purchased the Carfin estate and coalfield for furnace purposes.

In 1851 he married the daughter of Mr. David Napier, of Singapore, and granddaughter of the first editor of the "Encyclopedia Britannica." Mr. Dixon carried on the business chiefly by himself, but in 1872 he formed it into a private limited liability company. Since that time the management has been vested in a board of directors, the chairman of which, up till his death in March, 1899, was Mr. John Mann Thomson, of Dankeith, Ayrshire. In his very able conduct of the business he was assisted by his brother, Mr. Charles Thomson, and Mr. T. R. J. Logan, chairman of the company. The directors rule the general policy; the managers of the different iron works and collieries attend to the details, each in his own sphere; the engineers take their orders from the counting-house in Dixon Street, Glasgow; while Mr. Neil Robson, secretary of the company, superintends the commercial department.

The company has collieries at High Blantyre, Carfin, Clelland, Wilsontown, ironstone mines at Fauldhouse, iron works at Calder, Wilsontown, and Govan; it has depots for the sale of coal at Glasgow, Leith, Edinburgh, etc., and has developed a business in the production and sale of the by-products of blast furnaces.

It is with "Dixon's Bleezes," known to the iron trade as Govan Iron Works, however, that we have elected to deal. The furnaces might almost be said to possess a social character and personality. Situated on the South-Side of Glasgow, lying south-west of the Gorbals, Govan Iron Works were once on the utmost verge of industrial Glasgow, and now lie pretty well within the city. Cathcart Road bounds the front, the Caledonian Railway encloses the western side, and on the east the last few tenements of Crown Street border the works. In the early days the six big furnaces with their blazing crests stood alone above the beds of sand into which the molten metal poured; but now the extensive grounds are filled up with auxiliary buildings and railway sidings. Long rows of waggons stand on the railway lines filled with the raw material of the furnaces, with ironstone . . . . . . . . .

. . . . itself has caused. The cause becomes effect and the effect cause; the gas causes heat, which heat causes gas, and on the way from the one stage to the other tar and ammonia are created, with their attendant by-products. The ammonia was formerly distilled in huge tanks, which were recently discarded for a high towering boiler that condenses tons of ammonia in a day. When condensed the ammonia is mixed with sulphur, and becomes the white sulphate with which we are familiar.

In addition to being an iron work producing 300 tons of pig iron every day, and a gas work manipulating 20 million cubic feet of gas daily, Govan Iron Work has within it many subordinate industries. The blacksmiths' shop is a little industry in itself, having four fires, several steam hammers, and olivers; the mechanics' shop is a busy place, fitted and equipped with all the latest tools for turning and moulding steel and iron; the joiners' shop, where waggons are repaired and woodwork renewed; and all the other auxiliary industries necessary to the constant operation of a large work are comprehended within the area of Govan Iron Works. About 400 men are employed, and Mr. Robinson, the manager, can truthfully say that no serious friction has occurred with the workers. The men are supplied with the best of tools, and are paid the highest rate of wages. Notwithstanding that a company has "neither a soul to save nor a body to kick," a kindly conscientiousness governs Messrs. William Dixon, Limited, in dealing with workmen. To spare the men risk, for example, an ingenious instrument has been fitted up by the arm whereby the temperatures of the furnaces are automatically registered, and the signal given for letting flow the molten metal without the terrible dangers of the old rule of thumb former practised. By intelligent government of and friendly interest in the men, by scientific use of natural agents, and by alert readiness to adopt new methods and inventions, Govan Iron Works still flourish; and though "Dixon's Bleezes" no longer flame across the night the iron works play an important part in Glasgow's industry.