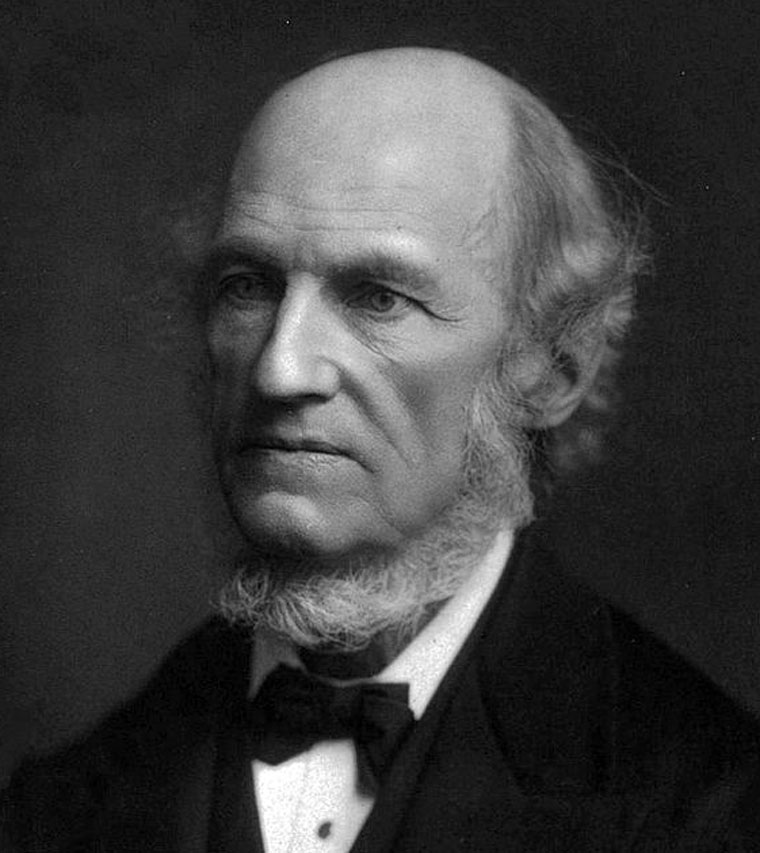 William Benjamin Carpenter (1813-1885) was an English physician, invertebrate zoologist and physiologist. He was instrumental in the early stages of the unified University of London.

1813 October 29th. Born in Exeter, the eldest son of Dr Lant Carpenter and his wife Anna Penn). His father was an important Unitarian preacher and from his father, Carpenter inherited a belief in the essential lawfulness of the creation: this meant that natural causes were the explanation of the world as we find it. William embraced this "naturalistic cosmogeny" as his starting point.

On his resignation in 1879, Carpenter was appointed C.B. in recognition of his services to education.

His graduation thesis on the nervous system of invertebrates won a gold medal, and led to his first books. His work in comparative neurology was recognised in 1844 by his election as a Fellow of the Royal Society. His appointment as Fullerian Professor of Physiology at the Royal Institution in 1845 enabled him to exhibit his powers as a teacher and lecturer. His gift of ready speech and luminous interpretation placing him in the front rank of exponents, at a time when the popularisation of science was in its infancy.

He worked as investigator, author, editor, demonstrator and lecturer throughout his life; but it was his researches in marine zoology, notably in the "lower" organisms, as Foraminifera and Crinoids, that were most valuable. These researches gave an impetus to deep-sea exploration, an outcome of which was in 1868 the oceanographic survey with HMS Lightning and later the more famous Challenger Expedition. He took a keen and laborious interest in the evidence adduced by Canadian geologists as to the organic nature of the so-called Eozoon canadense, discovered in the Laurentian strata, also called the North American craton, and at the time of his death had nearly finished a monograph on the subject, defending the now discredited theory of its animal origin. He was an adept in the use of the microscope, and his popular treatise on it stimulated many to explore this new aid.

He was president of the Quekett Microscopical Club from 1883–85. He was awarded the Royal Medal in 1861.

Carpenter's most famous work is the 1853 Use and Abuse of Alcoholic Liquors which was one of the first temperance books (Washingtonian Movement) to promote the fact that alcoholism is a disease.

In 1856 Carpenter became Registrar of the University of London, and held the office for twenty-three years. Carpenter gave qualified support to Darwin but he had reservations as to the application of evolution to man's intellectual and spiritual nature.

Carpenter is considered as one of the founders of the modern theory of the adaptive unconscious. Together with William Hamilton and Thomas Laycock they provided the foundations on which adaptive unconscious is based today. They observed that the human perceptual system almost completely operates outside of conscious awareness. These same observations have been made by Hermann Helmholtz. Because these views were in conflict with the theories of Descartes, they were largely neglected, until the cognitive revolution of the 1950s. in 1874 Carpenter noticed that the more he studied the mechanism of thought, the more clear it became that it operates largely outside awareness. He noticed that the unconscious prejudices can be stronger than conscious thought and that they are more dangerous since they happen outside of conscious

He died on 19 Nov 1885 in London, from burn injuries occasioned by the accidental upsetting of the fire heating a vapour bath he was taking. He was buried in Highgate Cemetery.

DEATH of Dr. W. B. CARPRNTER. - Dr. W. B. Carpenter, C.B., F.R.S., died at three o'clock on Tuesday morning, at his residence, 56, Regent's-park-road, from the effects of burns caused by the accidental upsetting of a lamp whilst he was taking a vapour bath on Monday.

The deceased, who was in his 73rd year, was a native of Bristol, where he was born in 1813. He was the son of Dr. Lant Carpenter of Bristol, and was educated in Bristol, at University College, London, and at the University of Edinburgh, where he graduated M.D. in 1839.

He commenced practice at Bristol, but resolving to devote himself exclusively to scientific and literary pursuits, he removed to London in 1843. Soon afterwards he was appointed Examiner in Physiology and Comparative Anatomy in the University of London, and Professor of Medical Jurisprudence in University College, which offices he held until 1856, when he was appointed to the registrarship of the Un1veraity of London.........