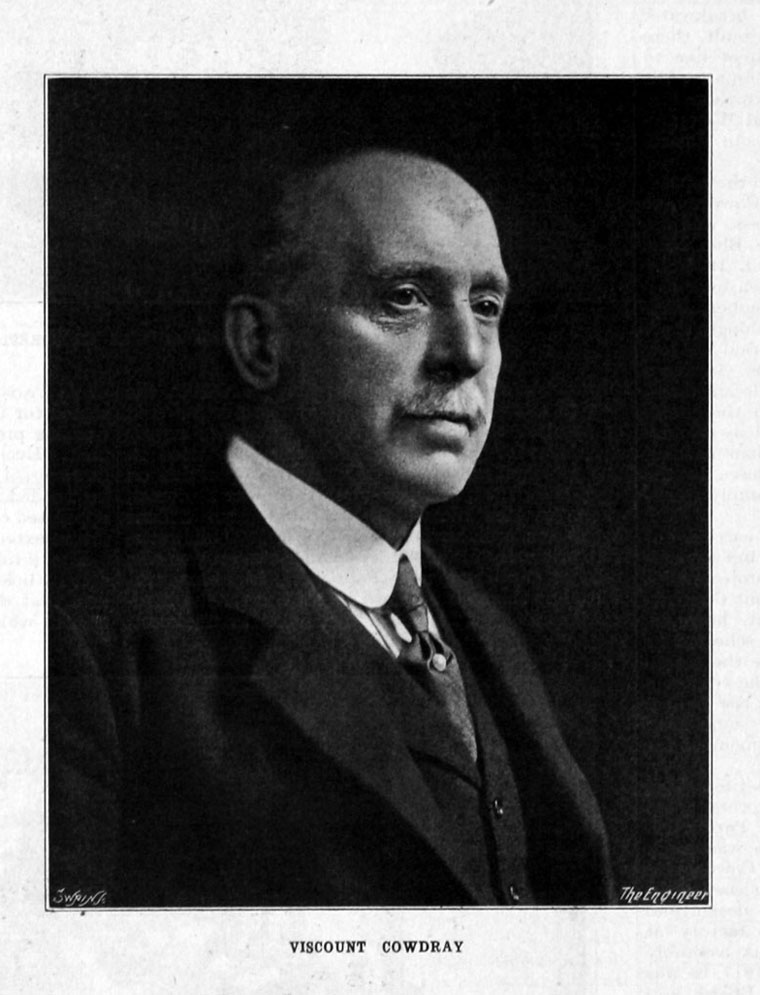 Weetman Dickinson Pearson (Viscount Cowdray) (1856-1927) head of of S. Pearson and Son was an engineer, oil industrialist, and owner of the Pearson conglomerate.

1872 Joined the Pearson-family firm of builders and contractors, which had been started by his grandfather Samuel Pearson in 1844.

1879 On his grandfather's retirement, Weetman was given his shares; he and his father were the only partners.

1884 Weetman aggressively expanded the business, moving the headquarters from Yorkshire to London. An early proponent of globalization, he built the Dover harbour, docks in Halifax, railroads and harbors around the world, and the Sennar Dam in Sudan.

In 1889, Porfirio Diaz invited him to Mexico to build a railroad from the Atlantic to the Pacific. While laying track, his crew discovered one of the world's largest oil fields, the Potrero del Llano. He created the Mexican Eagle Petroleum Co, one of Mexico's largest firms. It was taken over by the Royal Dutch Petroleum Company (now Royal Dutch Shell) in 1919.

1895 Pearson was elected Liberal M.P. for Colchester in the 1895 general election and held the seat until 1910 when he was created Baron Cowdray, of Midhurst in the County of Sussex.

1900 his company took over the construction of the Great Northern and City Railway and, after completion in 1904, ran it for four years.

1901 As a result of missing a train connection, he spent a night at Laredo, close to a large oil discovery in the Texan oilfields. Although entirely ignorant of the petroleum industry, he saw the commercial possibilities if oil could also be found in Mexico, so he began to acquire oil concessions.

1910 Pearson's drillers struck oil in Mexico which rapidly became the third largest oil producing country in the world, with Pearson controlling about 60 per cent of the production. He created a large, vertically integrated business which controlled oil production, refining, distribution, and selling.

WWI Under his leadership, the munitions factory H.M. Factory, Gretna and the tank assembly at Chateauroux were built.

In January, 1917, he became 1st Viscount Cowdray. That same month, David Lloyd George requested that he become President of the Air Board. Pearson agreed, provided that he receive no salary. Lord Cowdray worked diligently to improve the output of aircraft and produced a threefold increase in the number of aircraft under his tenure. Yet he was criticized after German bombing produced over 600 casualties on June 13, and resigned the following November.

Following the war, he was active in Liberal politics and in philanthropic activities. He endowed a professorship in the Spanish department at the University of Leeds, and contributed to University College London, the League of Nations Union, the Royal Air Force Club and Memorial Fund, and to many public projects.

1927 May 1st. Died at his home Dunecht House, Aberdeenshire.

"The world has become sensibly the poorer by the death of Viscount Cowdray, which took place early on Sunday morning at his Aberdeenshire seat, Dunecht House, to which he had journeyed on Friday last. His purpose in visiting Scotland, whither he was accompanied by Lady Cowdray, was so that he might be in Aberdeen on Tuesday last in order to receive, with his wife, the freedom of that city. During the seventeen years that he had owned an estate in the shire, both he and Lady Cowdray had rendered great services to Aberdeen and its neighbourhood, and it was in recognition of those services that the honour of the freedom of the city was to be conferred upon them. We understand that, had the ceremony taken place, it would have been the first time that husband an wife had been similarly hounoured at the same time, and the first time that Aberdeen had conferred the distinction on a lady in her own right.

Lord Condray - or Weetman Dickinson Pearson, to call him be the name which he bore before being raised to the peerage, and by which he was, probably, best known by the majority of the community - was, of course, the head of the great contracting firm of S. Pearson and Son Ltd. He was born at Shellet Woodhouse, near Huddersfield, in Yorkshire, on July 15th, 1856, and he was therefore drawing near to the completion of his seventy-first year at the time of his death...Read More.

Viscount Cowdray, the head of the well-known firm of contractors, Messrs. S. Pearson and Son, Limited, died suddenly on May 1 at Dunecht House, Aberdeenshire. Born in 1856, the son of the late Mr. George Pearson, Weetman Dickinson Pearson, as he was named, was educated at Harrogate. Leaving school at the age of 16, he was apprenticed to his grandfather’s firm and was soon entrusted with highly responsible work. His career illustrates in a striking fashion one of the advantages of experience in private enterprise. Young Pearson was put in charge of considerable contracts at the age of 20, and was made a partner in 1875. A visit to the United States aroused in him an admiration for American methods of dealing with difficult civil engineering enterprises, but he bettered the instruction of his exemplars when, some years later, he completed the famous Hudson River tunnel after the work had been twice abandoned by other contractors.

The late T. A. Walker, who managed to complete the Severn tunnel, after the Great Western Company had failed to finish the work by direct labour, used to say that one subaqueous tunnel was quite enough for a lifetime, but Weetman Pearson cheerfully shouldered the burden and anxiety of three, of which one, that which carries the tracks of the Pennsylvania Railroad under the East River from Manhattan to Long Island, was a fourfold tube.

His success at the Hudson River emboldened him to enter into a firm contract for the Blackwall tunnel in 1889-1890. This was driven mostly through clay, but had to pass through about 400 ft. of water-saturated gravel. It is 3,116 ft. long and the tube is 24 ft. 3 in. in internal diameter, which is the largest yet adopted for any subaqueous tunnel.

It was in 1904 that his firm undertook the work, above referred to, for the Pennsylvania Railway. Here, again, financial risks were taken which other contractors were loth to accept, and Messrs. Pearson boldly faced a possible loss of 200,000£. The tubes were 21 ft. 2 in. in internal diameter and the total length of each tunnel was about 6,000 ft. In passing under the river, the ground was so unsound that it was found advisable to deposit clay blankets on the river bed, which were brought up to within 20 ft. of the water surface. The porous material passed through was also consolidated with a grout of lias lime or cement. In parts an air pressure of 38 lb. was necessary.

In some respects, the work executed by Messrs. Pearson in Mexico was even more striking. So far back as 1607 Enrico Martinez made an attempt to drain off the low-lying lakes in the Valley of Mexico by tunnelling under the mountains at Nochistongo. This work collapsed shortly after its completion, and the inundations recommenced with the loss of some 30,000 lives. An open cutting was next proposed, but though the plan was accepted in 1637 it was not completed till 1789. This work, moreover, still left the city subject to flooding. Nothing further was done till 1856, when plans for additional works were called for; but little or nothing was done till 1885, when an American firm undertook the construction of the drainage canal required, but made such slow progress that, in 1889, Messrs. Pearson were called in to take over the works and complete them. The greater part was finished in 1896, but the formal opening did not take place till 1900. The connection with Mexico thus commenced, led to large contracts being entrusted to the firm, who constructed, accordingly, the Tehuantepec Railway, which was opened in 1902.

This work involved the construction of no less than 846 bridges and culverts. The most important of these was the steel bridge over the Jaltepec River at Santa Lucretia. This bridge is a five-span structure with a total length of 560 ft. The firm also undertook harbour improvement works at Puerto Alexico, Salina Cruz, and at Santa Cruz. In the course of operations at the latter site, the suction dredger brought up on one occasion a cannon ball weighing 32 lb.

The firm also carried through port improvements at Valparaiso, which cost some 3,000,000£.

They were also responsible for much work of the same character in Great Britain, carrying through important contracts at Liverpool, Cardiff, Port Talbot, Hull, Southampton, Seaham and Dover. The latter work, owing to the Admiralty requiring a harbour with an area of 610 acres, was an exceptionally heavy undertaking. Messrs. Pearson were also responsible for the new docks at Malta and for a dry dock at Halifax.

Amongst the latest of Messrs. Pearson’s important contracts was that for the Sennar dam, constructed across the Blue Nile at a point some 277 km. up-stream from Khartoum. This enormous structure has a total length of 3,025 metres, and a maximum height above foundation level of 39.5 metres. The total masonry aggregated 422,000 cubic metres. This dam will retain 636 million cubic metres of water and will provide for the irrigation of 300,000 acres. This work was commenced in 1914, but progress was interrupted by the war. In 1919 an attempt was made to restart, but under the conditions then prevailing no contractor was ready to enter into a firm contract. This was, however, done by Messrs. Pearson in 1922, and they started work accordingly in the December of that year, completing it in July, 1925. The engineering difficulties were added to by the unhealthiness of the climate, and the contractors accordingly reduced work to a minimum during the three “mosquito” months of the year, and made special arrangements to check the breeding of the pests. Supplemental to the dam was the construction of the canal conveying the water to the land to be irrigated. This is 114 km. long and its construction involved over 10 million cubic metres of excavation.

Mention should also be made of the prime role played by Lord Cowdray in developing the oil resources of Mexico. In this connection he exhibited a courage and enterprise which can only be adequately described as extraordinary. It was he, moreover, who devised the system of loading oil tankers through a floating pipe. Whilst his financial and business ability were of an exceptionally high order, he was also an exceedingly competent engineer, and quite capable at need of acting as his own foreman. A baronetcy was conferred on him in 1894, and he was created a Baron in 1910. In 1916, he was raised to a Viscount, being made P.C. and G.C.V.O. in 1925. In 1917 he served as President of the Air Board. He was Rector of Aberdeen University from 1918 to 1921, and his death occurred within two days of the date when it had been arranged to confer upon him the freedom of that city."