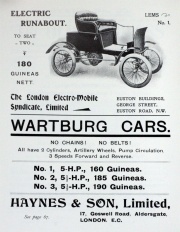 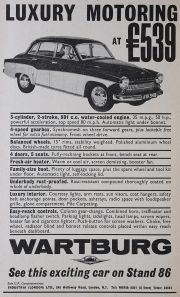 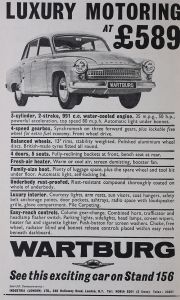 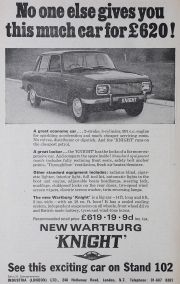 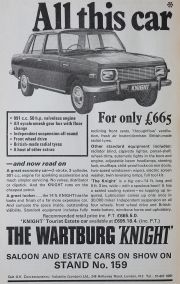 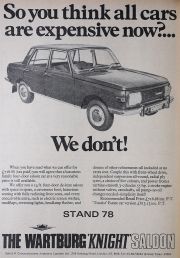 The marque dates back to 1898 when a car made by Automobilwerk Eisenach was named the Wartburg.

The name was dropped in 1904 when the company changed hands but re-appeared briefly in the 1930s on a sporting version of the BMW licence-built version of the Austin 7.

The name was revived in 1956 by VEB Automobilwerk Eisenach and given to an updated version of their IFA F9 car which had been in production since 1950. The new car had a three-cylinder two-stroke engine driving the front wheels. By this time, Germany had been divided and the Wartburg factory was in the communist East (GDR).

The engine was enlarged to 992 cc in 1962 and a completely new body was manufactured after 1966. This version, the 353, was sold as the Wartburg Knight in several countries, including the UK, where the estate model was sold as the Tourist. It remained on sale until 1976, by which time nearly 20,000 had been sold. This marked the end of right-hand drive Wartburgs.

In 1966, the gearbox gained synchromesh on all speeds and was designed to freewheel as a fuel efficiency and engine protection measure, which meant that unless the freewheel feature was disabled by a lever beneath the steering column, the car did not benefit from engine braking. Because the engine was a two stroke unit, it relied on the passage of the petrol mixture (two-stroke oil and petrol, at a ratio of 1:50) to lubricate the engine. With the freewheel device disengaged, the engine could be starved of lubricant and seize on long down-hill runs unless the throttle was opened briefly from time to time. Nevertheless, disengaging the freewheel device was recommended to give engine braking in snowy or icy conditions.

The offer of Volkswagen to move a surplus engine assembly line to the GDR, to be paid off by manufacture, was accepted by the government on account of fuel economy. In 1988, the new model Wartburg 1.3 therefore replaced the old model 353S, featuring the reliable though bulky engine from the Volkswagen Golf. Being larger than the compact 2-stroke unit, this needed considerable reconstruction of the engine compartment. The VW engine gave 64 horsepower. The new Wartburg was short-lived, its end being sealed by German reunification; production was inefficient and could not compete with West German manufacturers. Production ended in April 1991, and the factory was acquired by Opel.