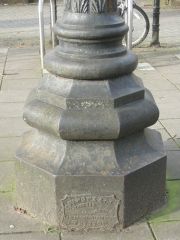 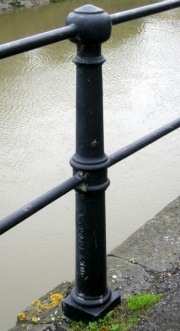 1876 Advert: '102, TEMPLE STREET, BRISTOL.
TO ENGINEERS, MANUFACTURERS, MACHINISTS AND OTHERS.
IMPORTANT SALE OF VALUABLE STEAM ENGINES, BOILERS, LATHES, AND VARIOUS MACHINERY.
Together with a Consignment of COSTLY TOOLS from one of the Best Makers.
MESSRS ALEXANDER, DANIEL, & CO. will SELL by AUCTION, on the Premises, A Large and Valuable Assemblage of PLANT and various MACHINERY, viz. :—
Five various Steam Engines, from 6 to 9-horse power, several smaller Steam Engines; one pair of Oscillating engines, fit for yacht; capital Cornish Boiler with Galloway's tubes; several Self-acting Slide, Surfacing and Screw-cutting Lathes, 7 to 16-inch Centre, and 8 to 25-feet Beds, by Joy, Manchester; one Boring Lathe, to bore 12 feet; Shaping and Slotting Machines; Centrifugal Drying Machine, by Manlove, of Nottingham, with Engine attached: Two Foundry Cranes, one to lift 7 tons; Crane Ladles and Shanks; Double Crab Winches and Lifting Jacks; Planing Machine, 8ft by 2ft. 6in. by 2ft. 6in, and small Hand-Planing Machine; Shaping Machine, 12in. stroke by Joy, Manchester: one each 6in. and 13in. Self-acting boring bars; one pair powerful Plate Bending Rolls; Steam Fittings and Safety Valves; Vertical Boiler, with Engine attached, by Nicholson; 7-Hors Portable Engine, nearly new, by Garrett and Sons; Hand Mortar and Piant Mills; Shafting and Pulleys; Pumps; Chaff Cutters; with other useful Plant and Effects, of Messrs William Pope and Co., Engineers and Iron Founders, who are removing from their present works nd premises, No. 102, Temple Street.
At the same time will be SOLD, by permission, A CONSIGNMENT OF NEW AND COSTLY TOOLS From one of the Best Makers: Comprising Three Double and Single Gear Drilling Machines, all self-contained : one 11-inch Centre Screwcutting slide Lathe, ....'[2]

1888 'ENGINEERING SOCIETY, UNIVERSITY COLLEGE.
The members who had visited Messrs Thomas's soap works a week ago, on Wednesday afternoon paid a visit to Messrs Pope's Barley Fields ironworks, St Philip's where was constructed the greater part of the hydraulic machinery and engines which had elicited their admiration at the soap works. They were received and conducted through the various shops by Messrs William and Arthur Pope. In addition to the work for local firms, such as Messrs Thomas (of the soap works), Lysaght, Fry and Co., Netham Chemical Works, &c., a great deal of the Corporation and Docks work originates in this establishment - for example, ornamental lamp bases for the former and accumulators for the latter. During the visit a large pan, 9ft. in diameter and weighing 34cwts., was cast for the Netham Chemical Works for use in soda crystallisation, This pan, one of an order of 14, was the centre of attraction to the visitors; the thinness of the casting, its hemispherical shape, and its large diameter rendered it a very difficult object to mould and cast correctly. When the core was withdrawn half an hour after the pouring, it was found that both the operations had been successfully performed. As far as mere weight is concerned, the specimen is by no means comparable with others that have been cast by the firm, some of which have weighed seven tons, nor with fly-wheels which they have produced, for the subsequent treatment of which they have a gap lathe capable of dealing with wheels 24 feet in diameter. In passing through the shops some portions of tanks for Avonmouth Docks were noticed. Some toothed wheels, made of ferro-aluminium (25 per cent. of aluminium having been added to the iron), were also examined; by adding this metal the casting is rendered tougher, stronger, and closer in grain, while blow-holes are almost unknown. The cupola in which the iron is melted is of special construction, there being attached to it a reservoir, in which the molten metal is collected, and in this way two tons can be drawn off at one tapping. This form of cupola (Swain's patent), though common in the North, is rarely seen in this neighbourhood[3]