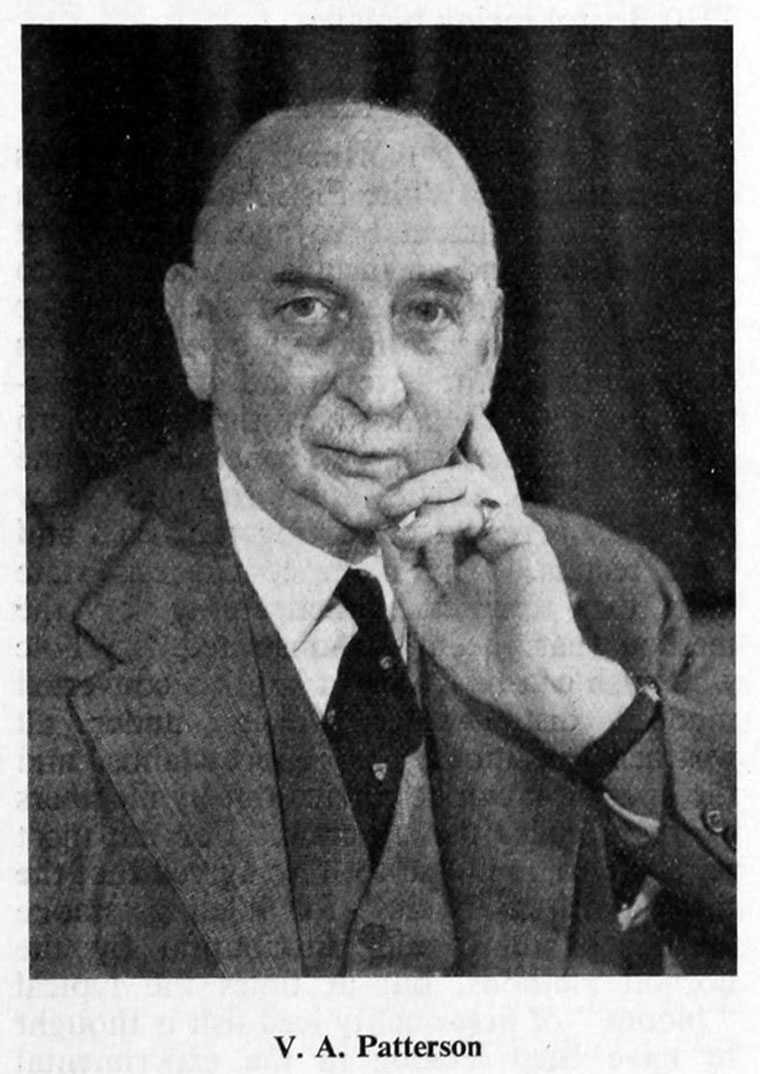 WE record with great regret the death of Mr. Victor Alexander Patterson, of Bexley, Kent, which occurred in the Middlesex Hospital, London, last Friday, September 13. Mr. Patterson, who was seventy, was deputy chairman and managing director of J. and E. Hall, Ltd., Dartford, and had completed forty-six years 1n the firm's service.

Victor Patterson was born in Belfast and was educated at Oundle School. After leaving school in 1904, he began a seven-year pupilage with W. H. Allen, Sons and Co.,Ltd., at Bedford.

Mr. Patterson joined the staff of J. and E. Hall, Ltd., in 1911, his first appointment being that of assistant works manager; two years later he became works manager of the refrigeration department. Although the manufacture of refrigeration equipment was the principal part of the firm's business at that time, one section of the works had for some years been engaged in the production of heavy motor vehicles. About 1912, the War Office instituted a system of subsidies for privately-owned commercial vehicles, which had to conform to a uniform specification and pass a series of rigorous road tests. The subsidy was, of course, paid on the understanding that the vehicles would be available for use in the event of war. The lorries built by Hall's qualified for the subsidy, but before the Government's scheme was fully operating the first world war had started. Arrangements had to be made for the production of the maximum possible number of motor vehicles.

In addition to his responsibilities in the refrigeration equipment department of his firm, Mr. Patterson undertook much of the organisation essential to the stepping up of motor vehicle output to meet wartime demands.

A few years after the first world war, J. and E. Hall, Ltd., discontinued its motor vehicle production business. Progress in the development of refrigeration machinery was rapid, and, in addition, the firm took over the business of Medway's Safety Lift Company.

In the reorganisation required to deal with this development, Mr. Patterson joined the board of J. and E. Hall, Ltd., as works director in 1925; he was appointed deputy chairman and managing director in 1949.

During the whole of the forty-six years which he spent with J. and E. Hall, Ltd., Mr. Patterson took a special interest in the welfare of the company's employees, and the many amenities available to all who are employed at the Dartford Ironworks have resulted largely from his initiative and enthusiasm. But Mr. Patterson's ability and energy as an engineer and administrator were by no means restricted to his company.

His record of service to the engineering industry generally, and in public affairs, is impressive. For many years Mr. Patterson had taken an active part in the work of the Engineering and Allied Employers' National Federation. He was a member of its management board and had served on many of its committees, including the negotiating committee. He was also a past-president of the Federation's London and District Association.

In the county of Kent and especially in the neighbourhood of Dartford, there were numerous public offices which Mr. Patterson gladly perforn1ed. They were concerned with hospitals, sports associations and other cultural and social organisations. In 1948, Mr. Patterson became president of the local unit of the Sea Cadet Corps and set up its training centre, the T.S. "Anson." Mr. Patterson was also a Justice of the Peace of the County of Kent. As a mark of appreciation of his many services, he was made the third Freeman of the Borough of Dartford in 1953. Last year Mr. Patterson was created a C.B.E., and only a month or so ago he was appointed a Deputy Lieutenant of the County of Kent.

There are many people within and outside the engineering industries who will mourn the death of Victor Patterson. For some time his health had been deteriorating, but his zeal and enjoyment of work and service to the community remained undiminished. His personality and his life's work will long be remembered.