Difference between revisions of "Tupper and Co" 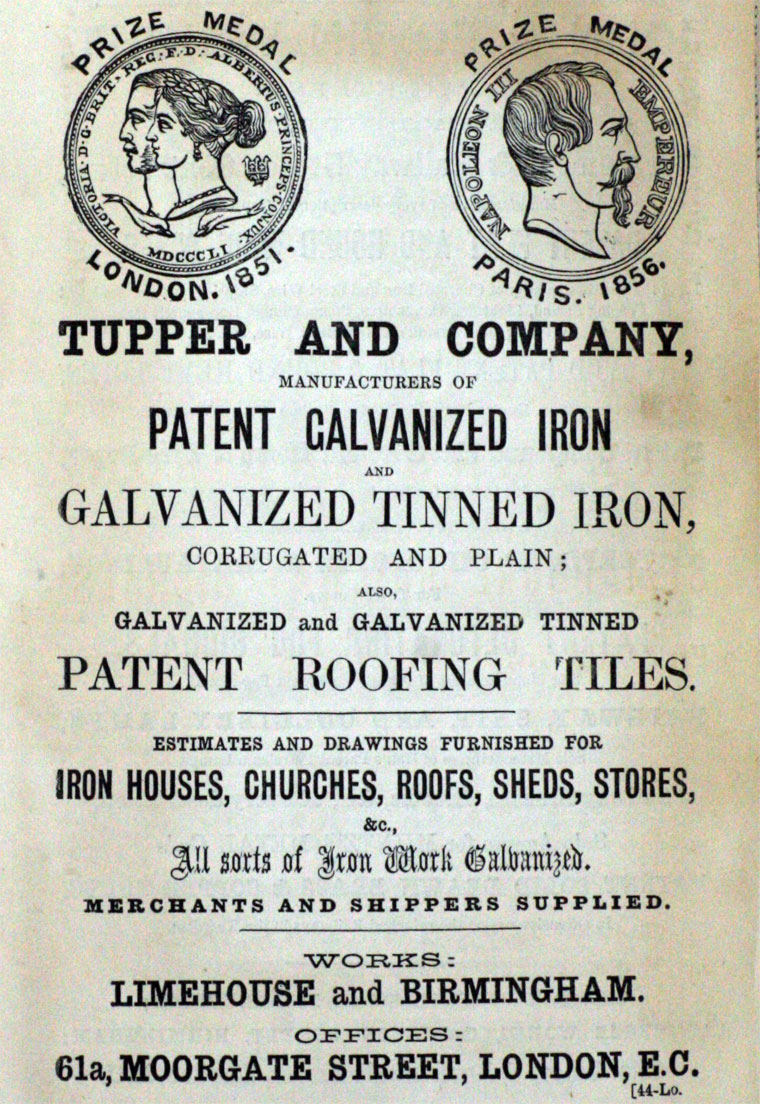 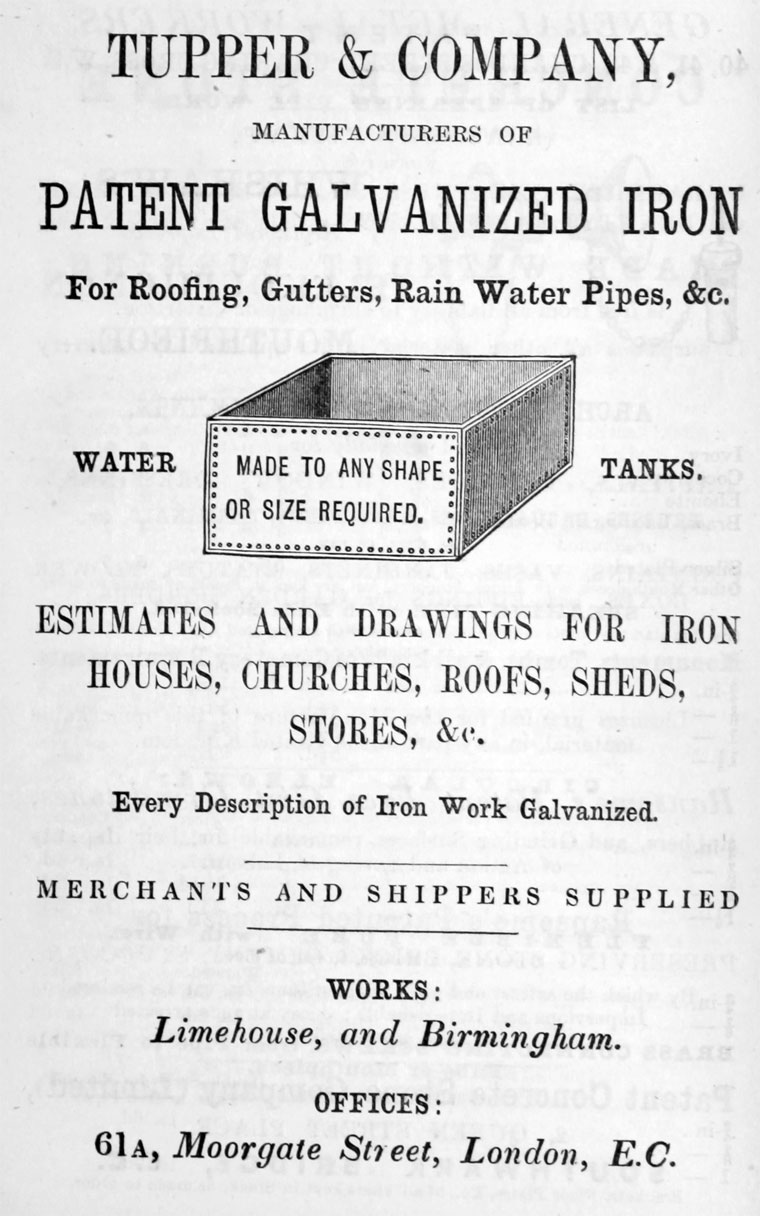 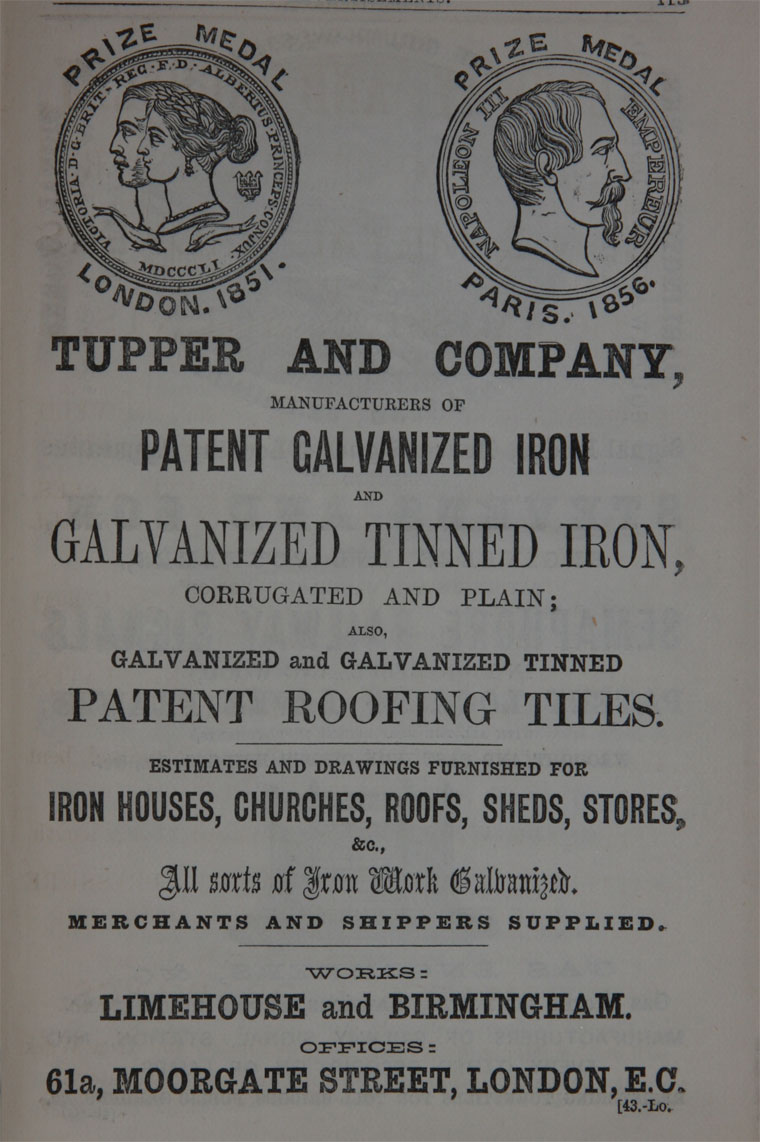 of Limehouse and Birmingham.

1858 Mention of 'an iron corrugated church, designed by Mr. Digby Wyatt, and built by Messrs. Tupper and Co. by order of the East India Company, for exportation to Rangoon'[1]

1868 Partnership change. '...the Partnership heretofore subsisting between us the undersigned, under the style of Tupper and Company, and carried on by us in Moorgate-street, city of London, Commercial-road East, Limehouse, and Berkeley-street, Birmingham, as Galvanized Iron Manufacturers and Merchants, is this day dissolved by mutual consent, so far as regards Charles William Tupper, who retires from the said firm, which will be carried on by the remaining partners, under the same style or firm.... C. W. Tupper, Sam. Vincent, W. L. Grant, Martin F. Tupper.'[2]

1869 Manufacturers of galvanised iron and other iron work [3]

The company owned Britannia Ironworks, and the Richmond and Regent Works.

1883 Bankruptcy. '...Bankruptcy Petition against Charles Edward Cadogan Newton, of Walton Leigh, Salcombe, near Kingsbridge, in the county of Devon, trading in copartnership with Robert King, in the business of a Galvanized Iron Manufacturer, at Berkeley-street, Birmingham, under the style or firm of Tupper and Co....'[4]

1884 NOTICE is hereby given, that the Partnership heretofore subsisting between Robert King and Charles Edward Cadogan Newton, trading in copartnership at Berkeley-steet, Birmingham, and at Moorgate-street, in the city of London, as Galvanized Iron Manufacturers and Merchants, under the style or firm of Tupper and Co., was dissolved, on the 2nd day of June last, pursuant to a power contained in the articles of partnership; and that the business has been since the above date, and will in future be carried on by the said Robert King, under the same name or firm, and all debts due to and from the said late partnership will be received and paid by the said Robert King.[5].

1903 Explosion. 'At Wolverhampton yesterday Messrs Tupper and Co., iron and steel merchants, of Bilston, were fined £1 and costs for not complying with the term of the Workshops and Factories Act in that they omitted to have steam pressure gauge fixed on a boiler, which exploded on January and caused the death of four men and injuries twenty other workpeople. The solicitor for the company asked for adjournment so that proceedings could taken against James Higgs their head engineer, but the Stipendiary ruled that the company had already been allowed sufficient time.'[6]

1909 Mention of the company and apparently still trading.[7]

1912 'The Albion Bar Works, West Bromwich, formerly owned by Tupper And Co., have been acquired by Messrs. J. B. Lees and Sons. They hare a capacity of about 400 tons'[8]