Grace's Guide is the leading source of historical information on industry and manufacturing in Britain. This web publication contains 142,954 pages of information and 228,874 images on early companies, their products and the people who designed and built them. 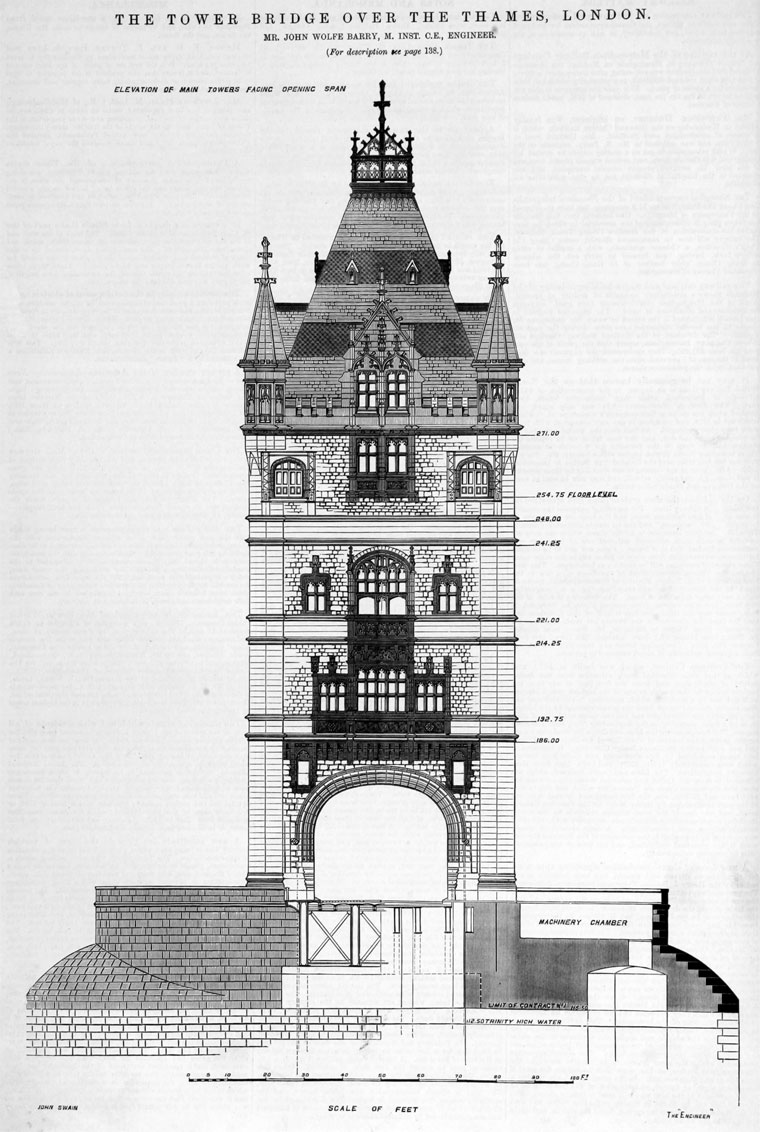 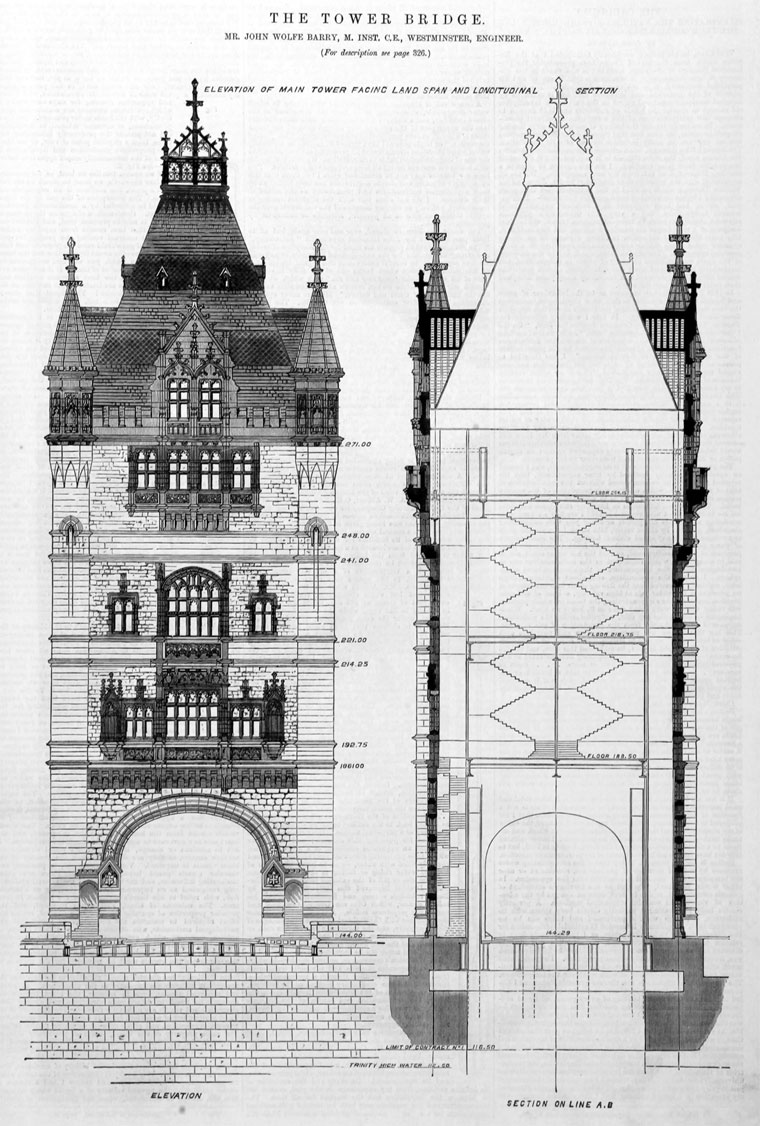 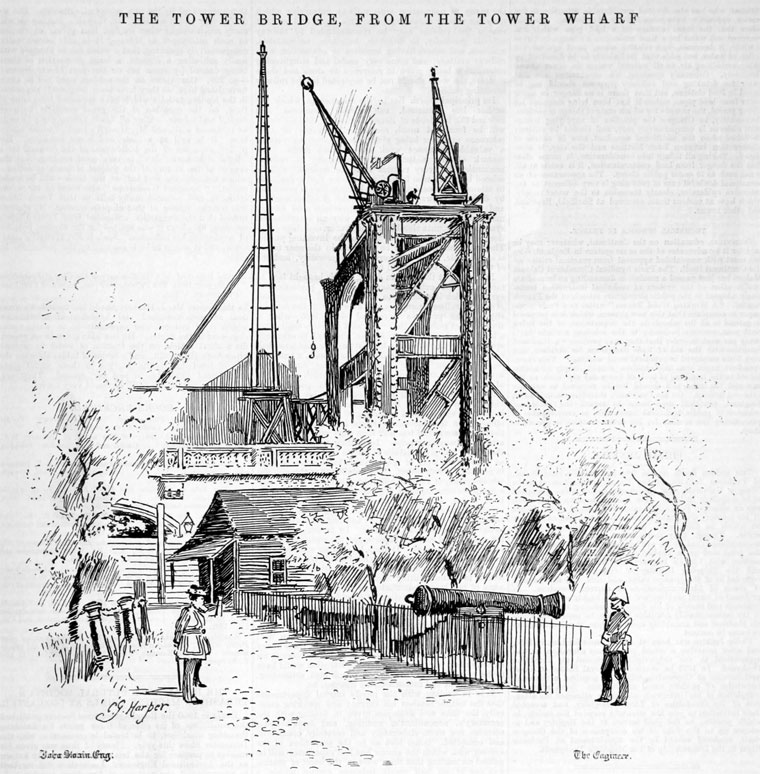 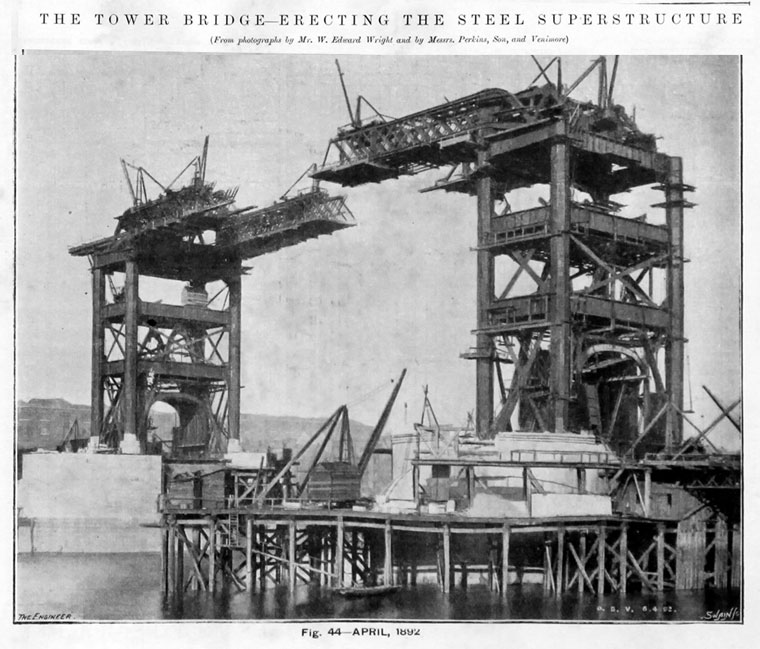 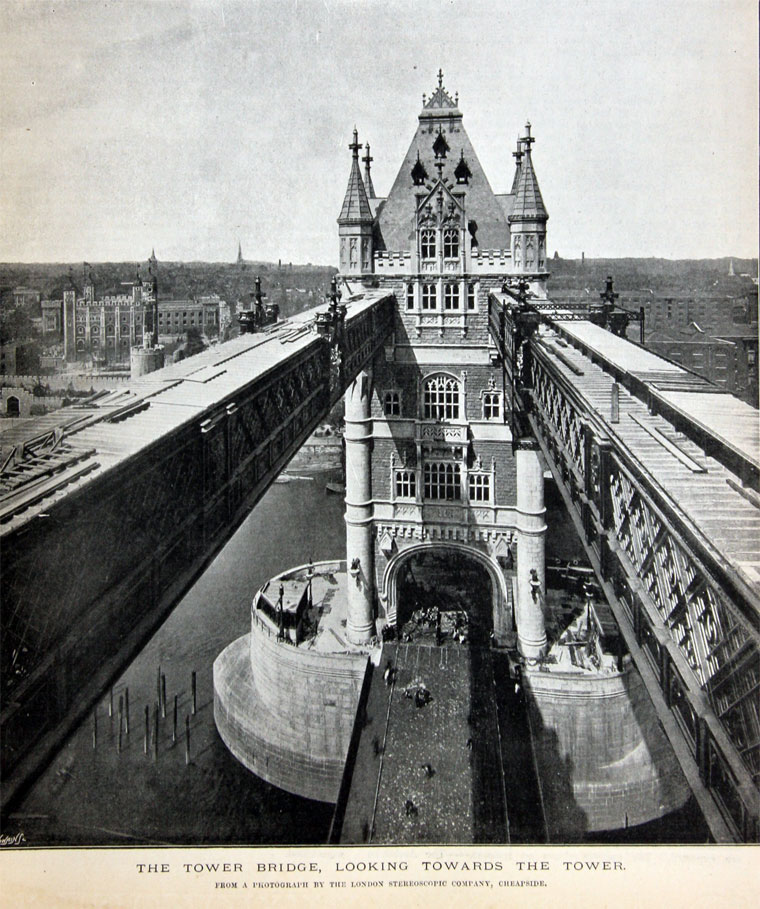 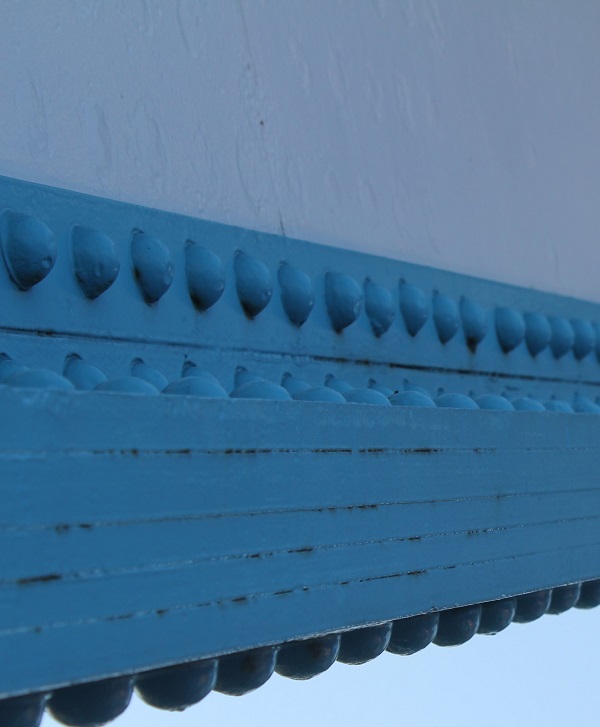 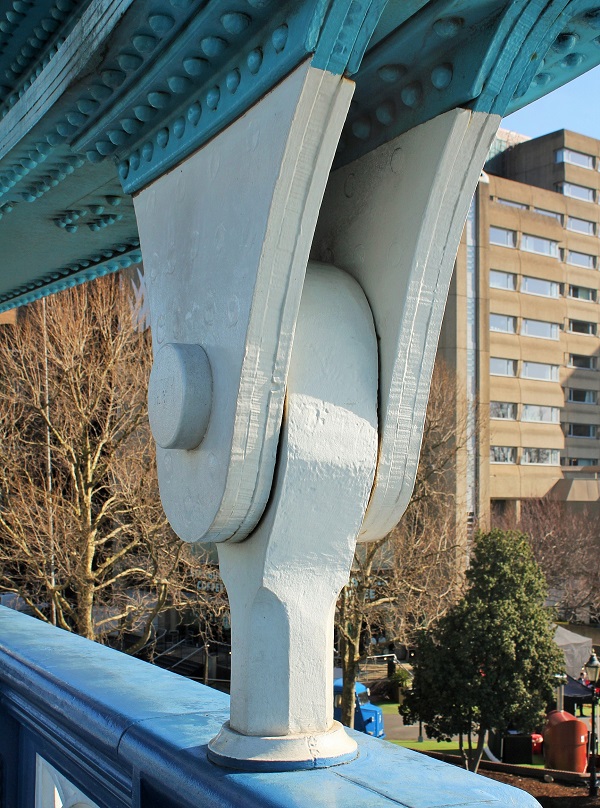 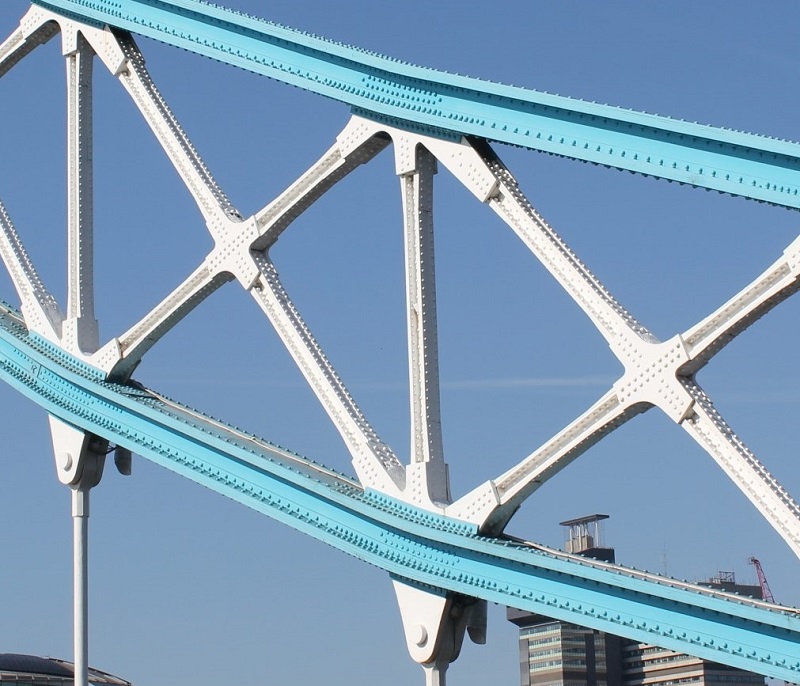 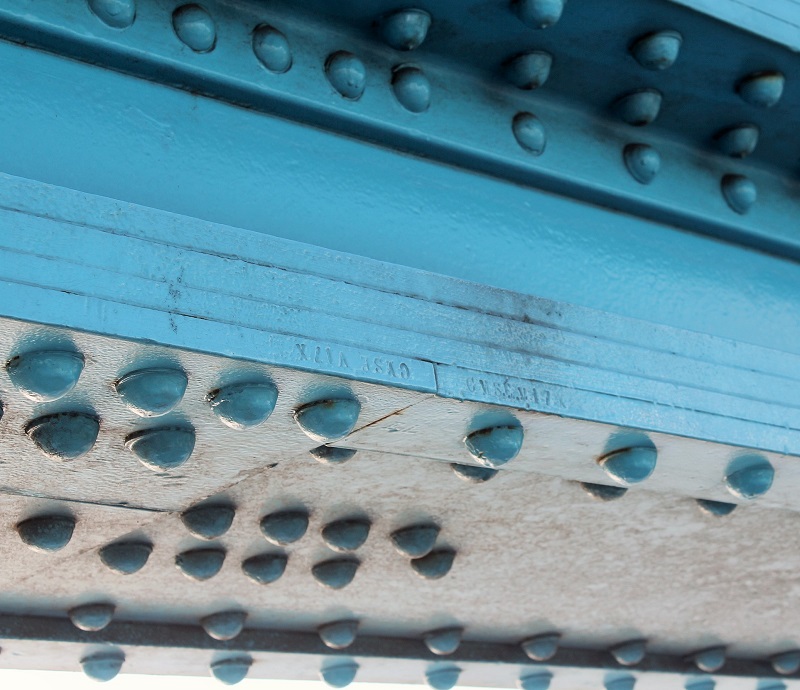 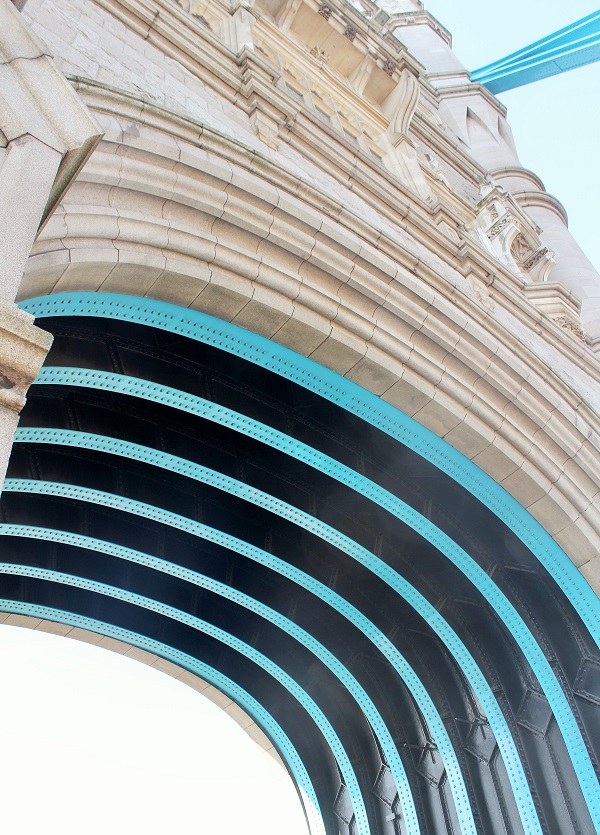 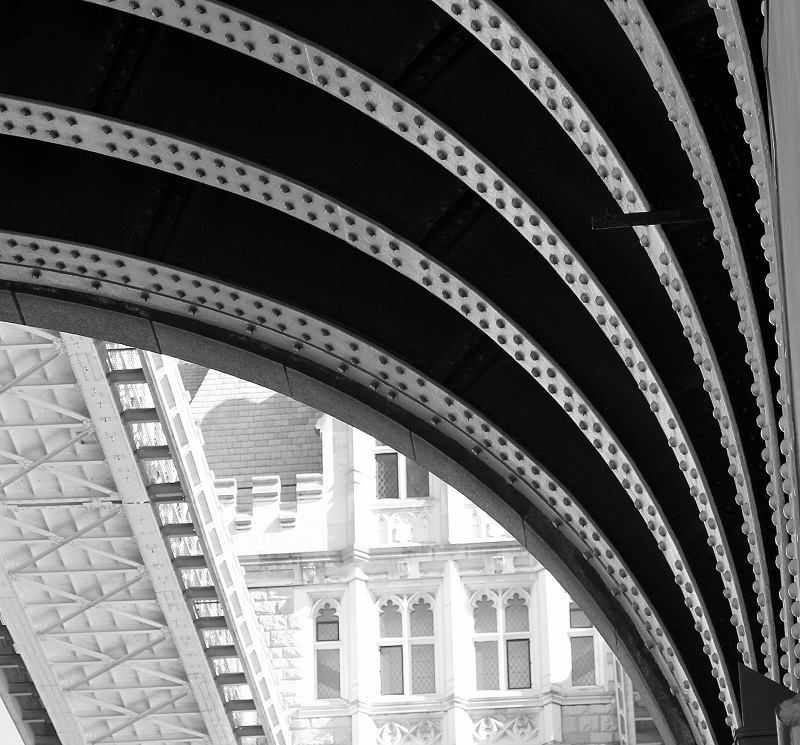 46. A fine blend of form and function

48. One of the pedestrian walkways. Note the glass floor

49. Inside one of the two pedestrian walkways

50. Looking through the glass floor to the bascules' junction 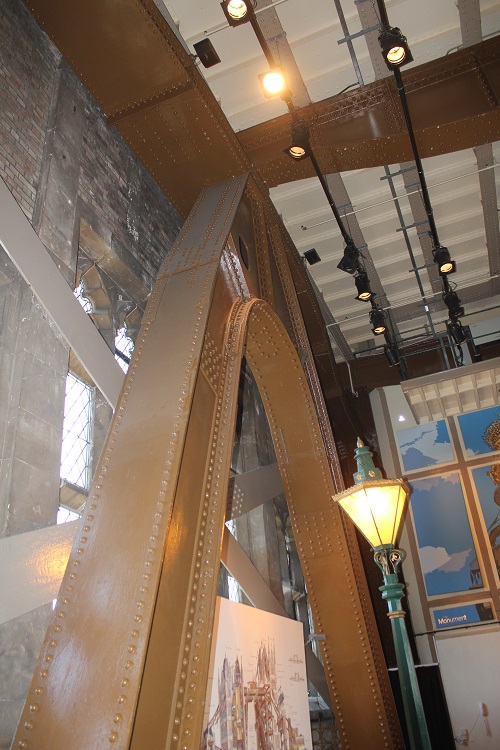 In 1878, architect Horace Jones first proposed a low-level bascule bridge. An Act of Parliament allowing the Corporation of the City of London to build it was passed in 1885. Jones was appointed architect, and knighted, but died the same year. John Wolfe Barry, already well-established with experience of bridges across the Thames, then took control.

This was the most easterly of the Thames bridges. The construction of a bridge here had long been resisted because of the interefence with shipping, the area then being a busy part of the Port of London. The problem was resolved by making the central part a bascule bridge. To avoid delays to pedestrians, footbridges were provided at high level between the towers, but these were eventually closed, as the time taken to open and close the bascules proved to be very short.

An authoritative description of the various proposals and of the design and construction was given in The Engineer in 1893[1]. The author was James Edward Tuit, Arrol's resident engineer on the project.'During the construction of this great work, Mr. Tuit found full scope for the exercise of his talent and ingenuity in dealing with the numerous problems which arose in the course of its erection.'

The main contractors, in chronological order of contract dates, were:-

432 workers were employed on the construction.

Tower Bridge is an iconic symbol, a busy crossing point, and a popular tourist attraction. It also affords an excellent opportunity for close study of impressive examples of engineering. The neo-Gothic cladding may be whimsical, but the workmanship is magnificent.

Most people could probably produce a simple sketch showing the towers, the lifting spans, and the link between the tops of the towers. But how many people can recall what lies beyond the towers? There are two smaller towers, and two suspension bridges, and two masonry viaducts.

The bridge is a highly complex structure, and a fascinating one to study. The steel structure beneath the masonry facades is not entirely hidden: parts of the structure can be seen by those who wish to enter the towers and cross the high level pedestrian footways. Access to the boilers and engine house is included in the tour. Even so, there is much that either cannot be seen or which is challenging to interpret. Fortunately, an outstanding account of the design, construction and operation of the bridge has been written by John M. Smith and published in 2019 [2]. It contains numerous historic and contemporary photographs and beautiful reproductions of engineers' and architects' drawings.

The bridge is an unusual combination of bascule and suspension bridge. The suspension 'chains' are massive girders, far removed from the typical flexible arrangement of chains or cables. Unlike the bascules, these suspension girders are almost fully exposed for scrutiny, allowing an appreciation of the amount of work involved in asssembling heavy sections from relatively thin plates and vast quantities of long rivets (e.g. photos 29 & 39). At the top of the high towers, the north and south suspension girders are interconnected by massive unseen ties crossing within the structure of the pedestrian walkways. These ties are connected to the suspension girders by massive (30" diameter) pins. Rolling bearings support the upper ends of the suspension girders, allowing thermal expansion and contraction. The landward ends of the suspension girders terminate at smaller towers, where they are connected to straight ties (seen in photos 25, 26, 27) which are securely anchored in the ground. In photo 28, note the discrete presence of discretely-fitted countersunk rivets in the white-painted web of the girder.

The pedestrian footbridges might appear to be straightforward lattice girders, but this is far from being the case. Photos 9 & 10 show that the first part of the span from each tower is a cantilever, rigidly fixed to the towers' steel columns. The central part is suspended from the cantilevers.[3]. A surprising feature is the presence of suspension cables (60mm diameter) and hangers. These were introduced in the 1960s to relieve the footway girders of the weight of the massive ties which interconnect the large suspension 'chains'.

The sections of land ties between roadway level and the abutment towers on both Surrey and Middlesex sides were actually box girders filled with lightweight concrete. This design was necessary to make the ties self-supporting. I’m guessing that the web on each side of the box girder comprised two vertical plates riveted together.