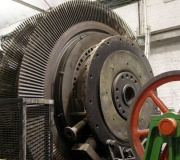 After some searching for a site for a new power station, the Tir John site near Swansea docks was selected by the Swansea Corporation Electricity Board. It was relatively cheap, allowed ample room for extensions, had abundant supplies of cooling water, and had immediate access to sea, road, and rail.

As originally constructed, the appearance of the station was characterised by two short chimneys. It eventually had three 89m high brick chimneys, but by the start of the Second World War only two had been partly built.[1]

Structural steeelwork was provided by Braithwaite and Co Engineers Ltd.

Provision was made for a further 60,000 kW. set in the same building.

The station embodied two advanced features, namely, the use of pulverized anthracite duff (waste from the washing of mined coal at the colliery), and the washing of the exhaust gases to eliminate sulphur oxides and dust. Originally the station was designed for burning steam coal on mechanical stokers, but extensive experiments in the combustion of anthracite duff, a low-volatile coal (6-7 per cent of volatile matter) of high calorific value (12,500 B.Th.U. per lb.) showed that under certain conditions it could be burned satisfactorily, and the station was redesigned to suit this method of firing the boilers. The anthracite duff was pulverized in four Hardinge ball mills, complete with classifier, cyclone separator, and exhauster fan. Steam was supplied to the two 30 MW turbines at 600 psi, 825 deg. F.

The condensing water was obtained from the King's Dock and returned to the Queen's Dock, by means of low-level tunnels. The shafts at the station are 300 feet deep and at the docks 250 feet and 240 feet deep respectively, the difference in levels being due to the gradients given to the tunnels for the purposes of drainage during construction. The shafts are 14 feet in diameter and the horseshoe-shaped tunnels driven through solid rock are about 9 feet in diameter and lined with 9 inches of concrete. The intake tunnel is about 0.5 mile long and the discharge tunnel about 0.75 mile. Difficulty was experienced at the docks during the sinking of the shafts. The depth of the water-bearing strata was too great to allow the use of compressed air, so the ground had to be frozen to the necessary depth by sinking a ring of circulating pipes through which a freezing mixture was passed. The shafts were then sunk and lined and the ground allowed to thaw.

Water required to make up the losses due to evaporation in the scrubbers is drawn from the Crymlyn Bog.

Tir John was connected with the old Strand Station by means of a duplicate underground 33 kV main.

'In 1931 the writer [E. Ivor David] proposed to Mr. J. W. Burr (the corporation electrical engineer) that anthracite duff, of which unlimited supplies were available in the vicinity, would be a cheaper fuel. The consulting engineers (Messrs. Preece, Cardew, and Rider) were at first sceptical, as there was at this time little available knowledge of the combustion of low volatile coals in this country outside the stoker plants at Tumble and pulverised fuel plants at Aberpergwm, installed and operated by the Amalgamated Anthracite Collieries, Ltd., and stoker installations at Tareni Colliery. These plants were inspected and the efficiency and running cost figures were supplied by the colliery companies. In February, 1932, a demonstration was arranged at Aberpergwm for the members of the Swansea Corporation. Mr. J. W. Burr explained the pulverised fuel system by a lecture and lantern slides. Further tests were made at the Blllingham works of the Imperial Chemical Company, where Welsh anthracite duff was successfully burned. Although the plant was designed for high volatile Durham coals full output was obtained with anthracite using 33 per cent. less coal. Tests were also made at the power stations of Derby Corporation, Coventry, and Aberpergwm. The consulting engineers and the electricity committee were satisfied that the use of this local fuel was a feasible proposition. An offer by Sir Alfred Cope on behalf of the Amalgamated Anthracite Colliery Company of supplies up to 300,000 tons per annum, with a calorific value of over 13,000 B.T.U.s per lb., an ash content of under 12 per cent., and a volatile content of 6 to 8 per cent. was accepted, and the new power house was re-designed with boilers equipped with pulverised fuel plant to burn this fuel.

'Cheap fuels are used in other super stations, notably Hams Hall, Birmingham. but no station in this country is purchasing heat units as cheaply as Tir John, and its fuel cost per unit generated should be the lowest under the C.E.B. Scheme. Fortunately the contractors for the Tir John station boiler plant (the International Combustion Company, Ltd.), who received the order in autumn, 1932, a few months earlier had secured the contract for two pulverised fuel boilers at the Cefn Coed Colliery of the Amalgamated Anthracite Company, and for the last two years have carried out experiments and tests and gained information on these smaller units which assisted the design and should simplify the operation of the large Tir John equipment. Evaporative efficiencies up to 82 per cent. have been obtained in these tests (which were made without air heaters or economisers). A further 6 or 7 per cent. would be obtained by the addition of these accessories, bringing the total efficiency up to 88 or 89 per cent., that is equal to the best figures obtained with medium or high, volatile coals. The question of purification of the flue gases, while not so important at Tir John as at Battersea or other municipal stations, and further simplified by the lew sulphur content of the anthracite coals, has been given careful consideration by Mr. Burr and the consulting engineers: They finally selected the Howden I.C.I. washing system.

'Another unique feature of the equipment of the station is that the electrical generators produce electricity at 33,000 volts. Generators have previously been made for this voltage, both in this country and abroad, but the Tir John is, we believe, the first complete power station to be laid out for this voltage from its inception. The switchgear controlling the generator output is by the B.T.H. Company, and the E.H.T. 132,000 volt sub-station. which is of the usual C.E.B. outdoor type. is by Messrs. Ferguson Pailin, Ltd. For the commercial success of station all that is required is load: The grid will take the whole output and thi:. corporation will re-purchase its requirements, either at station costs plus the grid charges (known as station adjusted costs) or at the standard C.E.B. tariff for the area. As this tariff is high compared with other areas, and it is anticipated that the Tir John Station costs will be among the lowest in the country. Tir John should have the two-fold advantage of a high demand from the grid and a low cost for the corporation supplies. The Swansea tariffs to consumers are already attractive ones, possibly with the lower generating cost, the E.H.T. bulk supply tariff to industrial users, may be low enough to convert the numerous tin-plate works to electric drive, and attract other manufacturers, requiring cheap power, to the area. If this occurs its success would be assured Rapid Use Anthracite has been mined In South Wales for some hundreds of years, but up to quite recently its value has been appreciated very much more by the foreigner than in this country. The foreigner burned the anthracite in scientifically designed apparatus whereby the rate of burning could be controlled. thus taking advantage of the high calorific value of this fuel, whereas, In this district anthracite was burned mainly in open grates which could not be controlled, with the result that the available heating power was not being used to the best advantage. .....'

The station was extended on an urgent basis during the Second World War.

Taking advantage of the huge Llandarcy oil refinery nearby, the power station was converted to run on oil in 1967 but rising oil prices in the 1970s led to its closure just nine years later.

1967 Converted to oil burning, taking advantage of the proximity of Llandarcy oil refinery.