Grace's Guide is the leading source of historical information on industry and manufacturing in Britain. This web publication contains 142,060 pages of information and 227,655 images on early companies, their products and the people who designed and built them. 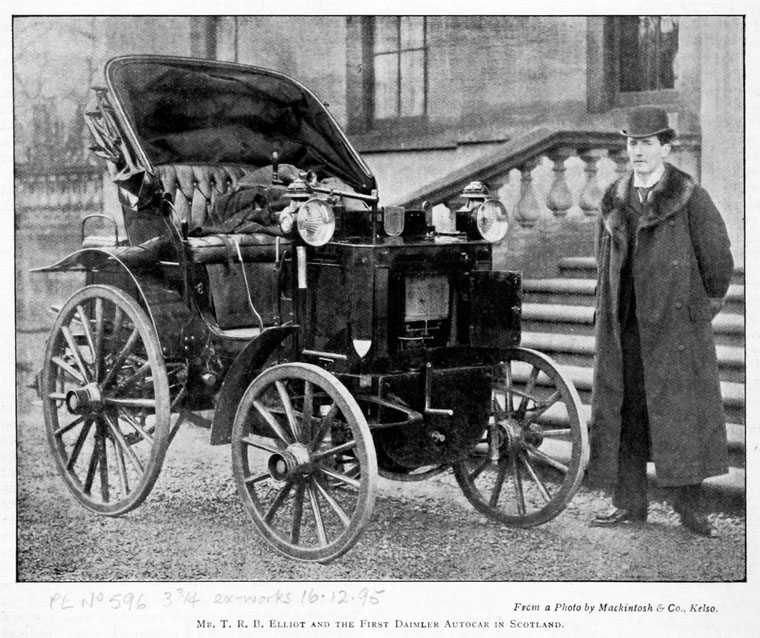 Thomas Robert Barnewall Elliot (c1871-1949) of Clifton Park, Kelso. Bought the 7th automobile imported to the UK and the first in Scotland.

1896 Purchased his second car. It was purchased from the Daimler Motor Syndicate and was similar to that of Evelyn Ellis. The car had iron tyres and could average 7 mph. [1]

1923 Elliot wrote '"I was the first person to own and use a motor car in Scotland, and about the fifth in England. I imported direct from Paris (and first used it in this district on 27th Dec. 1895) a 3.5hp Panhard car: weight, one ton; iron tyres; tube ignition; tiller steering; no radiator. It carried four and had a hood. Speed up to 12 miles per hour; but on steep hills three of the four passengers generally had to get out and walk. On 19th March 1896 I was fined 6d. and 19s. 7d. costs at Berwick for not having a man on foot walking in front of the car. Modern motor cars could only be used legally after Nov.1896, but I ran 1200 miles before this, including a trip to the Highland Show at Perth; the police for this trip undertook not to prosecute unless compelled to do so in the event of any accident being caused by me. The car cost £235 in Paris and cost £10 to bring here in a large wooden case. I sold the car in 1896 and then got in England a 4hp Daimler."'