1822 Quadruple sextant designed by Captain William Fitzwilliam Owen, on display at the Museum of the History of Science 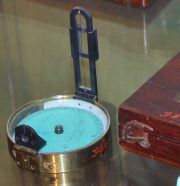 1789-1796 Apprenticed to Jesse Ramsden of Piccadilly, the most eminent scientific instrument maker of the day

Jones continued to assist Ramsden until the latter's death in 1800

With his brother, Jones worked for private customers and for the trade, in particular for Edward Troughton of Fleet Street.

1803 A Thomas Jones married Emma Osborn in Westminster (unclear whether this is the relevant marriage)[1].

By 1806 had opened his first shop in Mount Street, off Berkeley Square.

1811 Mathematical instrument maker; witness to the operation of Woolf's steam engine at Woolf and Edwards premises in Lambeth[2]

Major national observatories at home and overseas ordered their principal astronomical instruments from him including the Cape of Good Hope Observatory, Greenwich Observatory, Armagh Observatory and the universities of Oxford and Cambridge, although the quality of his work on the Cape instrument was questioned.

1824 Thomas Jones, Charing Cross, Mathematical Instrument Maker to the Board of Longitude, became a member of the Institution of Civil Engineers.[3]

Jones was one of the founder members of the Astronomical Society

Married Emma; their son Thomas worked with his father, attended the London Mechanics' Institute in 1834, and continued the business until 1861.

1835 Elected Fellow of the Royal Society

1836 of Charing Cross, Westminster. Was an Associate of the Institution of Civil Engineers

Also devised an all-metal travelling barometer and a transit instrument for Sir Henry Englefield, a lactometer for Sir Joseph Banks, and a small azimuth compass for Henry Kater.

1850 He moved the business to 4 Rupert Street

1852 Died in his shop. He was buried at St James's Church, Piccadilly.