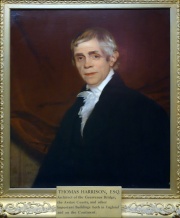 Thomas Harrison (1744-1829) was an English architect and bridge engineer who trained in Rome, where he studied classical architecture. Returning to England, he won the competition in 1782 for the design of Skerton Bridge, Lancaster in Lancaster. After moving to Lancaster he worked on local buildings, received commissions for further bridges, and designed country houses in Scotland. He also designed the Grosvenor Bridge, Chester

In 1786 Harrison was asked to design new buildings within the grounds of Lancaster and Chester castles, projects that occupied him, together with other works, until 1815. On both sites he created accommodation for prisoners, law courts, and a shire hall, while working on various other public buildings, gentlemen's clubs, churches, houses, and monuments elsewhere. His final major commission was for the design of Grosvenor Bridge in Chester.

Some of Harrison's designs, including his buildings at Lancaster Castle, were Gothic in style, but most were Neoclassical, particularly those at Chester Castle. He was regarded at the time, and since, as a major influence in the emergence of the Greek Revival in British architecture. A bridge he designed at the start of his career, and another towards the end of his career, incorporated innovative features; Skerton Bridge was the first substantial bridge in England to have a flat roadway, and the Grosvenor Bridge was the longest single-arched masonry bridge in the world at the time of its construction. Many of Harrison's structures have survived, most of them now designated by English Heritage as listed buildings. Despite his work being nationally admired he spent his entire career in northwest England, visiting London only occasionally; most of his buildings were in Lancashire, Cheshire, and the nearby counties.

1744 August 7th. Baptised. Born in Richmond, Yorkshire, England, the son of a joiner, also named Thomas. His precise date of birth is not known, but it is likely that he was baptised on 7 August 1744. Little is known about his early life, other than he attended Richmond Grammar School, and it is presumed that he worked with his father.

In 1769 he was sponsored by a local landowner, Sir Lawrence Dundas of Aske Hall, to join George Cuitt (who later became a landscape painter) to study in Rome. Here he studied at the Accademia di San Luca, and during his seven years in Rome, amongst other activities, made drawings of Roman structures, including temples and Trajan's Column.

In 1770 Harrison submitted a design to Pope Clement XIV for converting the Vatican Cortile del Belvedere into a museum for antique statues. This was "favourably received but not in the end adopted". Three years later he entered the Accademia's competition to re-plan the Piazza del Popolo. His design was unsuccessful, but it was exhibited at the Royal Academy in 1777. Following the failure of this design to be accepted, he petitioned the pope, and was awarded gold and silver medals, and made Accademico di Merito. He was then commissioned by the pope to alter the sacristy of St Peter's, but the pope died before the work started.

Harrison returned to England in 1776, probably via France, as he made drawings of buildings in Nîmes and Paris. He produced designs for a bridge and a road in London, which were not accepted, and he returned to Richmond in 1778.

The major works executed by Harrison at the start and end of his career were bridges: Skerton Bridge in Lancaster and Grosvenor Bridge in Chester, both of which incorporated innovative features.

In 1782 he won the first prize in a competition to design a bridge to cross the River Lune at Lancaster and to replace a medieval bridge. After some amendments to the design, the foundation stone was laid in June 1783, and Skerton Bridge was completed in September 1787, at a cost of £14,000 (£1,590,000 in 2015). The bridge was carried on five elliptical arches, and was the first in England to have a flat road surface.

1788 Built the Skerton Bridge, Lancaster over the river Lune. This was the first flat road bridge. It was supported by 5 elliptical arches and made of stone.

He was appointed unofficially as the bridge master of Lancashire, and having carried out the duties of country surveyor for Cheshire since 1800, was officially appointed to the post in 1815.

Harrison's later bridges in Cheshire included the Mersey Bridge at Warrington (1812–17), and Cranage Bridge near Holmes Chapel (1815–16). These were the only bridges he designed to be built in timber rather than in stone, and both have been replaced. They were the first bridges of their type to be built in England, and were his only bridges to be regarded as "failures".

During his career, Harrison was consulted about the design of other bridges in the country.

Towards the end of his career, Harrison worked on two bridges in Chester. At the time the only road crossing over the River Dee was the medieval Old Dee Bridge, which was becoming inadequate for the increasing volume of traffic. In 1825 Harrison added three new arches on the upstream side of the bridge, and built a footway that was corbeled-out, also on the upstream side. Meanwhile negotiations had been underway for a much more substantial bridge. In 1825 an Act of Parliament was passed for the Grosvenor Bridge to be built downstream from the Old Dee Bridge. To provide access to the new bridge, properties, including a church, had to be demolished, and Harrison was involved in designing the new approach to the bridge, which was named Grosvenor Street. He also prepared three different plans for the bridge, one in iron, the others in stone; one of the stone bridges had three arches, the other a single arch spanning 200 feet (61 m). The single-arch bridge would be the longest single-arch stone bridge in the world at the time, and there were doubts about its stability. Harrison's design was supported by the engineers James Trubshaw and John Rennie, and Trubshaw made a limestone model of the bridge to confirm its stability.

By this time Harrison was aged over 80, and in 1826 he resigned from the commission. Later that year the design was costed by Thomas Telford, and the town council subsequently accepted the design. Trubshaw was in charge of the construction, with Jesse Hartley as his clerk-of-works. The foundation stone was laid in 1827 by the Earl of Grosvenor (after whose family the bridge was named), and work began the following year. It was formally opened in 1832 by the future Queen Victoria, and traffic began to cross it the following year. The total cost of the bridge was just under £50,000 (£4,200,000 in 2015). Harrison did not live to see it completed, as he died in 1829.