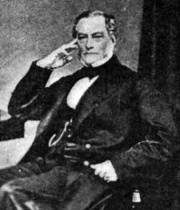 Thomas Grubb (1800-1878), engineer and telescope builder, was an Irish optician and founder of the Grubb Telescope Co

Thomas started out in 1830 in Dublin as a metal billiard-table manufacturer. He diversified into making telescopes and erected a public observatory near his factory at 1 Upper Charlemont Street, Portobello, Dublin. As makers of some of the largest and best-known telescopes of the Victorian era, the company was at the forefront of optical and mechanical engineering. His innovations for large telescopes included clock-driven polar mounts, whiffletree mirror mounting cells and Cassegrain reflector optics.

Grubb helped build the famous telescope for William Parsons, 3rd Earl of Rosse, at Birr, County Offaly, Ireland. One of his earliest instruments - the telescope for Markree Observatory in County Sligo in the West of Ireland, supplied in 1834 - was, for several years, the largest telescope in the world. It was used to sketch Halley's comet in 1835 and to view the solar eclipse of 15 May 1836.

Later he built telescopes for observatories worldwide, including Aldershot Observatory, Melbourne, Vienna, Madrid and Mecca and others.

Their youngest son was Howard Grubb, who took over the optical business.

Thomas Grubb designed and built the Great Melbourne Telescope, described in detail and illustrated in The Practical Mechanic's Journal in 1868. The mirror was 4 ft diameter. After casting, it was annealed in an over for over a month, the cooling rate being monitored by thermocouple and galvanometer.[1]