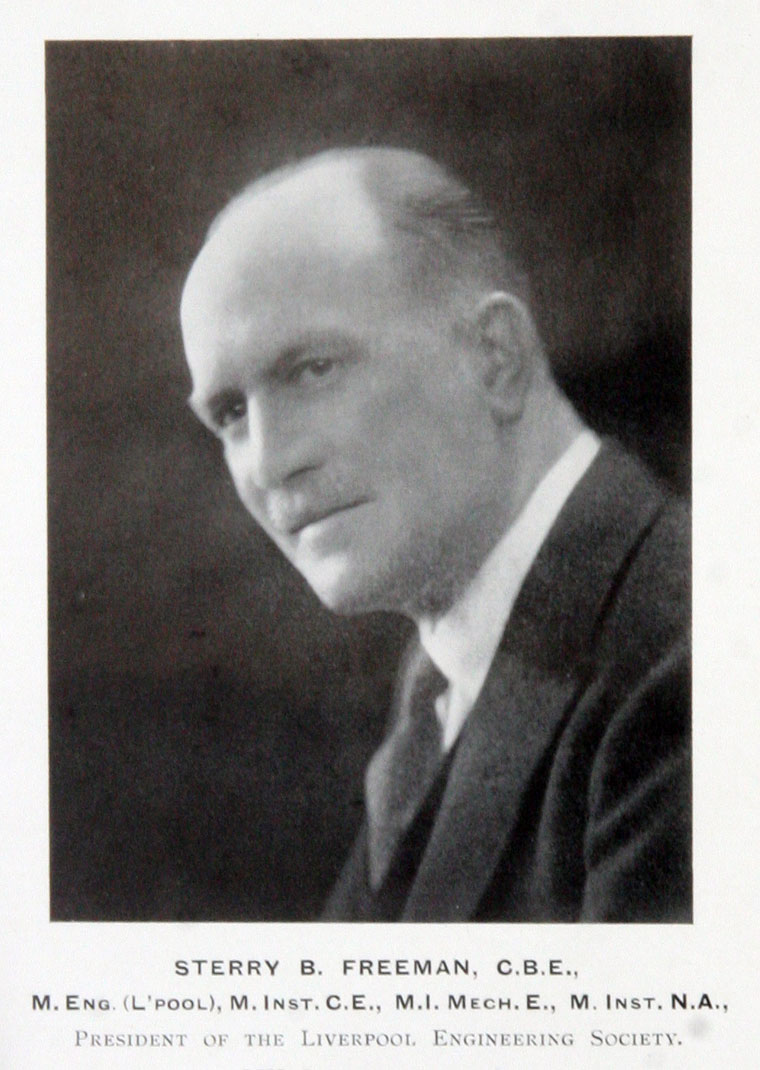 MARINE engineers, both in this country and abroad, will have learned with regret of the death of Sterry Baines Freeman which occurred at his home in Heswall, Cheshire, on Friday of last week.

Mr. Freeman, who had not been in good health for some time, was in his seventy-eighth year, and was actively engaged in marine engineering until he retired in 1944, and since then had continued to maintain a keen interest in his profession through his connection with various technical societies.

He was born at Bootle, Lancashire, on November 9, 1875, and received his early education at the Merchant Taylors' School, Great Crosby, and then spent a year in Germany at the Gymnasium, Luneburg, Hanover.

On his return to England in 1891, he was apprenticed to the Liverpool firm of Higginson and Co., and during this time he not only studied engineering and kindred subjects at the Bootle Technical College, but supplemented this by means of private tuition.

In 1896 he left Liverpool, and went to the Clyde, where he joined Scotts' Shipbuilding and Engineering Company, Ltd., to complete his apprenticeship, and then served as a draughtsman on engine erecting work.

Mr. Freeman returned to Merseyside to spend a short period with Laird Brothers, now Cammell, Laird and Co., Ltd., at Birkenhead, before going to sea to gain practical experience.

His time at sea was served on the passenger vessels of Rennie and Co., cargo vessels of Alfred Holt and Co., oil tankers and refrigerated ships, and so he gained considerable experience in the running of a number of different classes of vessels. During his three years at sea he gained rapid promotion and in 1902 sat for his First-Class Board of Trade Certificate.

On coming ashore he was with the Liverpool Refrigeration Company for a short time before becoming chief assistant to William Esplen, the consulting engineer and naval architect, under whom much pioneer work was carried out in the transport of meat and dairy produce, for those were early days in the employment of refrigeration.

From 1904, when he joined Lloyd's Register of Shipping as a surveyor, until 1910, he was engaged on survey work on both hulls and machinery for the society in the Liverpool and Manchester districts, and this work culminated in his staying in the latter city to become manager of the Manchester Dry Docks Company. Here Mr. Freeman was associated with Sir George Renwick and other leaders in the world of shipping and acquired valuable experience and training in the acceptance of responsibility, which were to be of the utmost benefit in the years to come. His successful management of the dry docks and his achievements elsewhere had not been unnoticed by marine engineers and those responsible for the management of ships, for in 1913 he was appointed superintendent engineer of the Blue Funnel Line.

This position be held for over thirty years and it is for the work he carried out during those three decades, covering two world wars and the years between, that be will be mainly remembered. It was his task to look after a fleet of some eighty vessels and to be responsible for their design, construction maintenance and repair. This was a labour of no mean magnitude, for apart from starting with an efficient design of hull the main factor influencing the economic working of a fleet is the choice of the main machinery which must prove economical to build to operate and to maintain, and Sterry B. Freeman, whose initiative and industry played such a vital part in his success, proved willing to foster new developments in marine engineering.

When he took over his duties as superintendent practically all the ships of Alfred Holt and Co. were fitted with triple-expansion engines using saturated steam and the passage of time was to reflect his' willingness to experiment in the changes effected in the composition of the fleet. He boldly adopted superheated steam in such ships as "Demodocus," "Nestor" and "Ulysses" and was one of the first to employ the geared turbine, which was installed in "Achilles," and he also early realised the possibilities of the oil engine as a main propulsion unit.

Under his control the fleet expanded and was propelled by machinery, both main and auxiliary, which evidenced his willingness to adopt innovations which in his judgment were sound. Many cargo ships were added to the fleet and his interest in oil engines was instrumental, in collaboration with Scotts' Shipbuilding and Engineering Company, Ltd., in the development of the Scott-Still two-stroke engine, which was fitted in the "Dolius" and "Eurybates."

He also gave his assistance to the North-Eastern Marine Engineering Company, Ltd., in developing the N.E.M. double-acting engine of that time.

In 1933 the "Tantalus" was the first ship of the Blue Funnel Line to be propelled by a Burmeister and Wain diesel engine.

In addition to being actively engaged in advancing the practical side of marine engineering, Sterry B. Freeman was also active in advancing marine engineering as a profession, and in the training of young engineers. In this latter work he was associated with the Liverpool Central Marine Engineering School and Liverpool University, and in recognition of his work the university conferred upon him the degree of Master of Engineering in 1927. Other evidence of his interest in the technical side of his work was his active membership of many technical societies, before whom he read a number of papers, including the 1932 Thomas Lowe Gray Lecture entitled "Modern Types of Propelling Machinery for Mercantile Marine Use."

During the first world war he represented the d1rector of the Board of Invention and Research on the Engineer-in-Chief's Committee at the Admiralty, and his work was recognised by his being made a C.B.E. in 1920. For a number of years he represented the Institute of Marine Engineers on the Technical Committee of Lloyd's Register of Shipping and also found time to serve the British Standards Institution the British Engineering Design and ' Construction Committee and the Marine Oil Engine Trials Committee.

After his retirement in 1944, after thirty-one years' service, Sterry Baines Freeman continued to be interested in marine engineering, and by his death the profession has lost an elder statesman, who was known and respected by marine engineers in the Old World and the New and from China to Australia, and whose ability had done much to foster developments in marine engines.