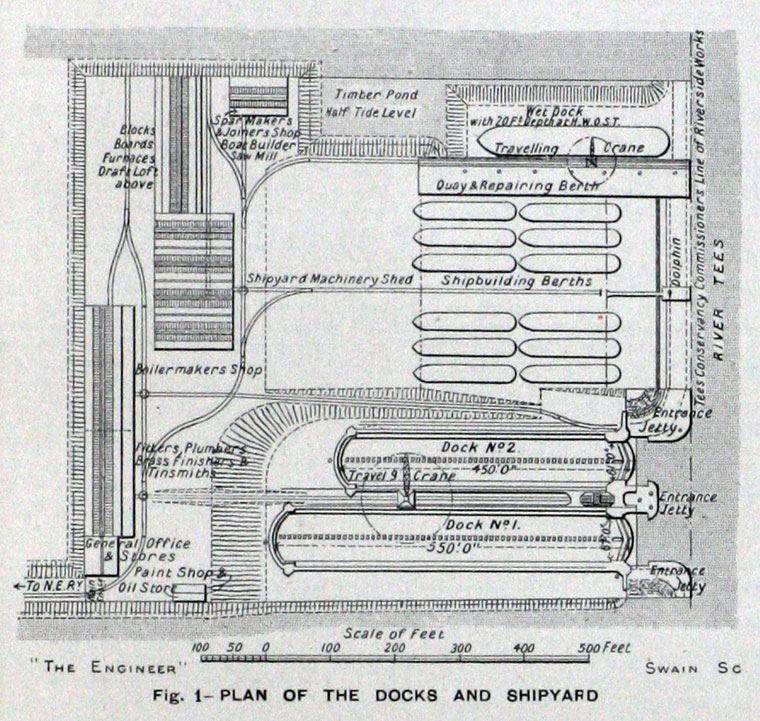 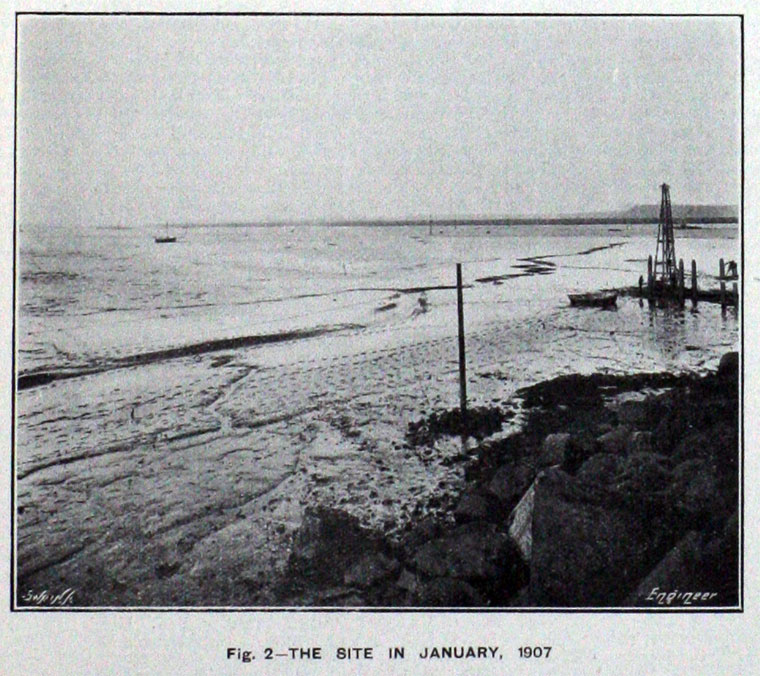 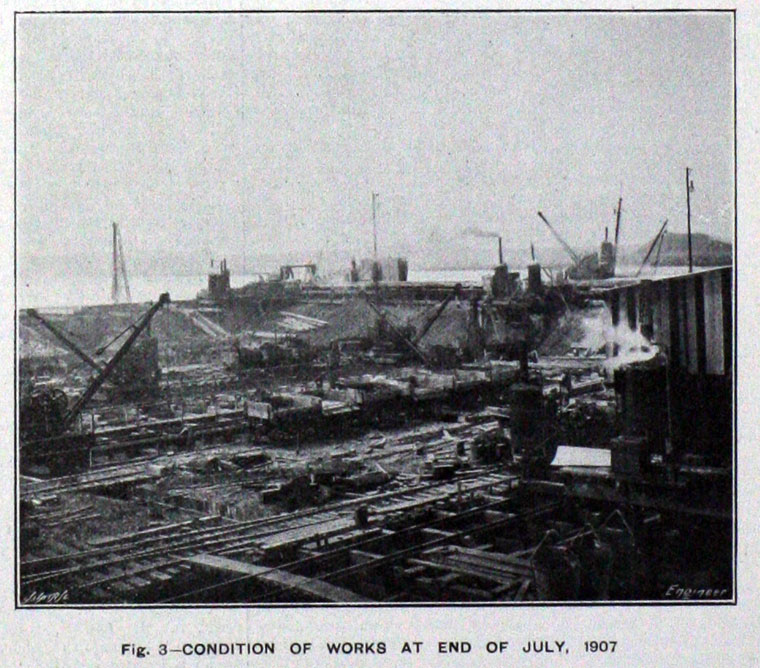 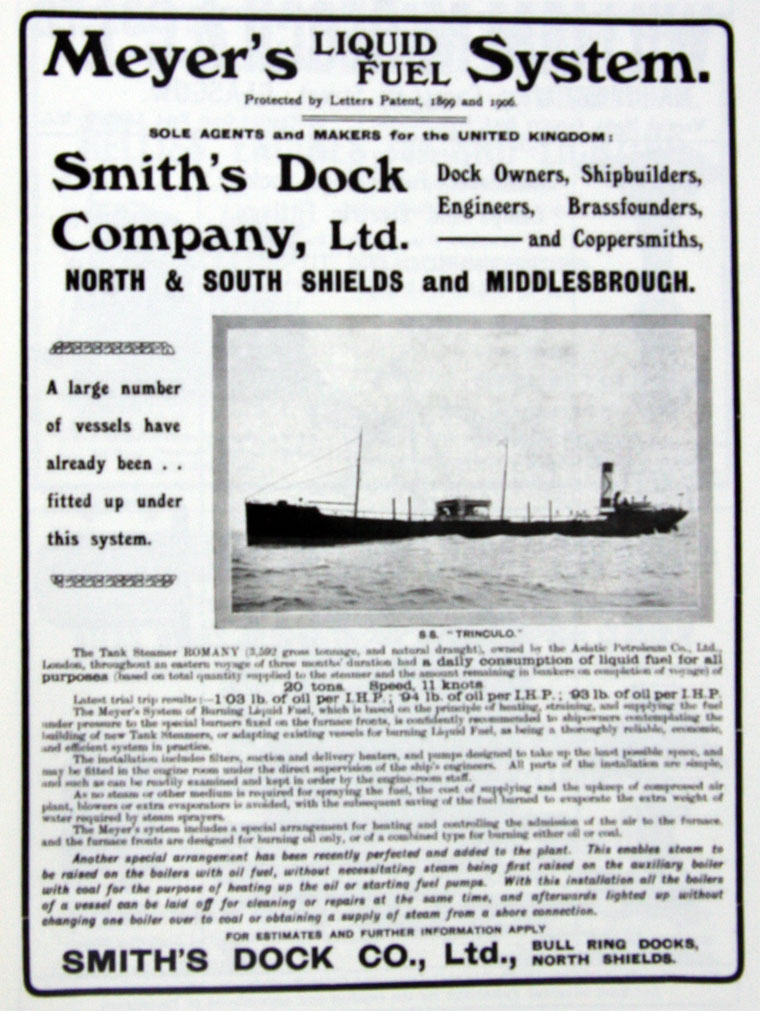 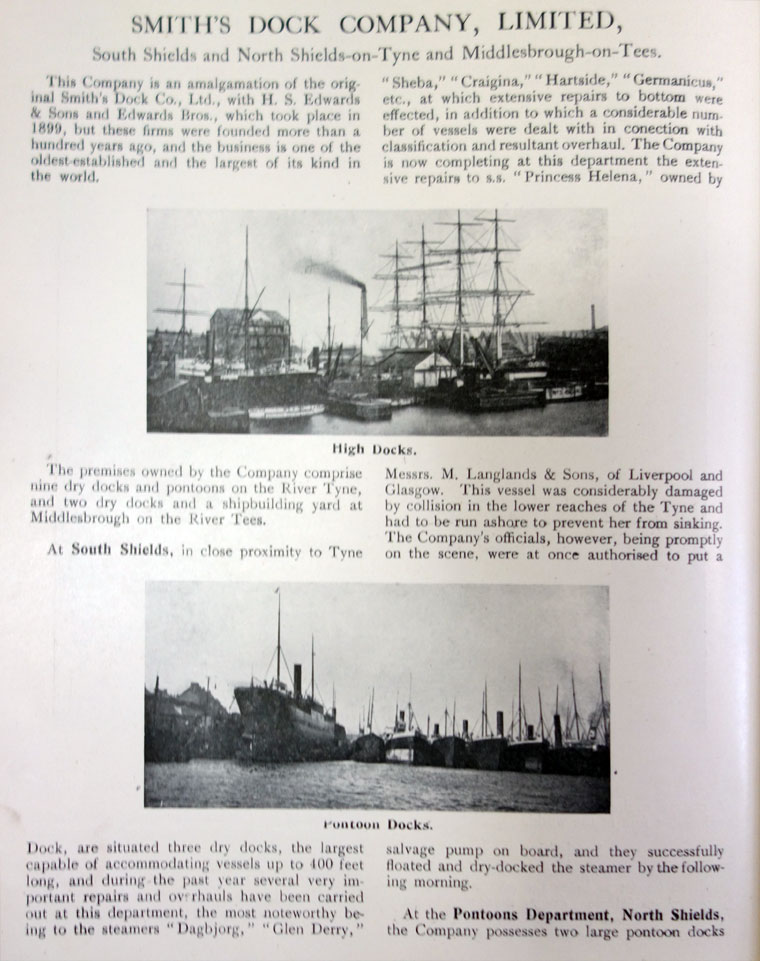 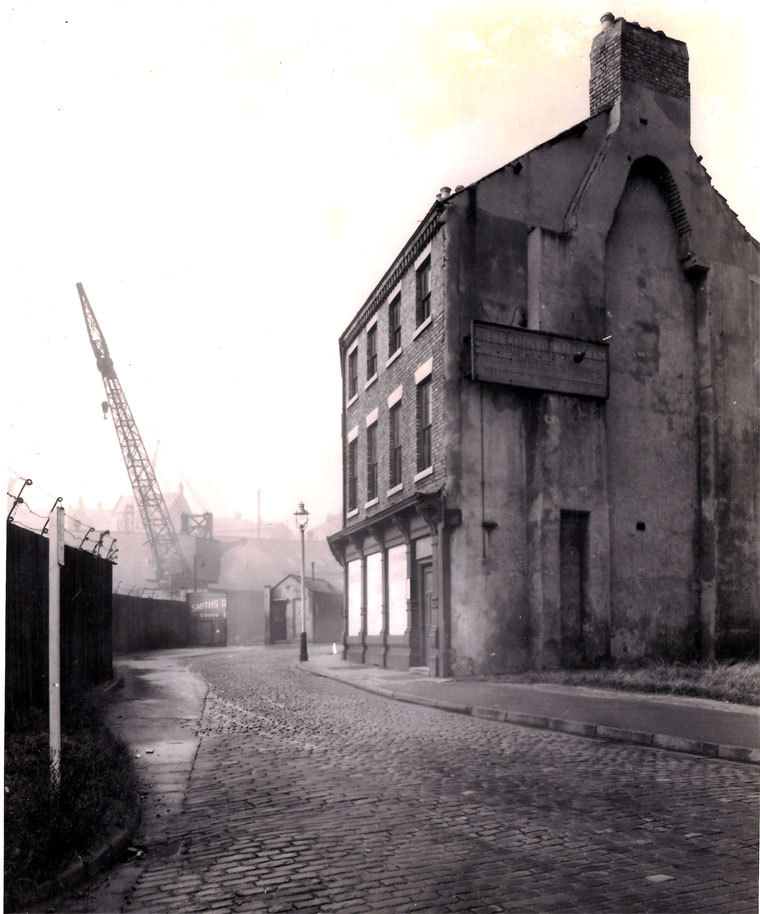 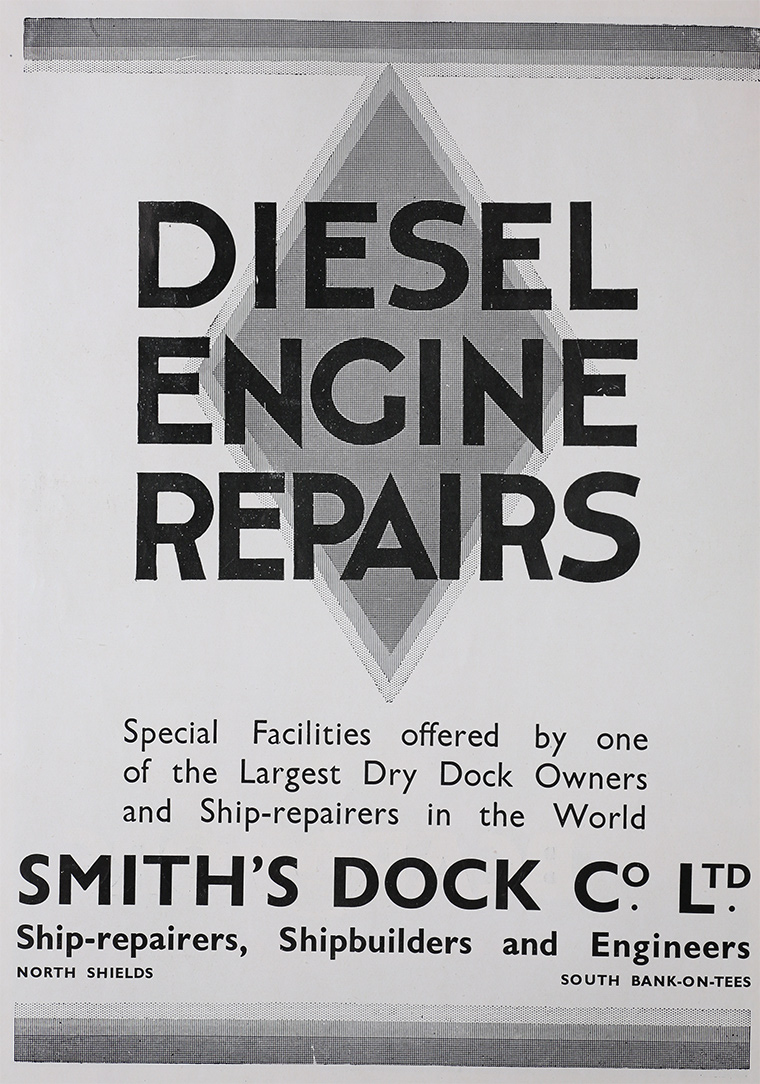 Smith's Dock Co, often referred to simply as Smiths Dock, was a British shipbuilding company of High Docks, North Shields, and later of South Bank in Middlesbrough on the River Tees.

The company developed at North Shields from its predecessor T. and W. Smith who established a major drydock complex there in the late 19th. century. They also built ships under their own name between 1848 and 1890 after which they concentrated on repairs [1].

1899 Company reconstructed. The company was registered [3] as result of amalgamation of T. and W. Smith with the Bull Ring repair yards of Harry S. Edwards and Sons and Edwards Brothers.

1900 Building of ships resumed under the Smiths Dock name [4].

1907/8 The Smith's Dock Co shipyard and associated drydocks and repair facilities were developed on a completely new site fronting the River Tees at South Bank, a little way downstream from Middlesbrough, with steelworks to east and west [5].

1909/10 The last two vessels launched at North Shields were fitted out at the new South Bank yard in 1909-1910; the sequence of yard numbers began with 417 in continuity from the Tyneside yard [6].

1910 The Yard made its first dredger Priestman followed by twenty small trawlers and drifters, one whaler, two tugs, two barges and three coasters. [7]

1912 The yard began making whale-catchers along with minesweepers and coasters.

1920-22 The yard began arc-welding along with riveting. Up to 1930 the yard mainly made colliers, tramps and cargo-liners.

1926 As an indirect result of the coal strike, the Tees shipyard of Smith's Dock Company, Ltd., was closed down. The closure of the shipyard did not extend to the engine works or the dry dock, nor was it in any sense due to lack of work. The firm had a fair number of orders to execute, and latterly it had been employing between 600 and 700 men. The stoppage of the local steel works through the coal strike has, however, had the effect of holding up supplies of essential materials -plates, bars, &c., and, as a consequence, the firm had reluctantly been compelled to close an establishment which worked continuously since it was first opened seventeen years ago in 1909.[12]

1931 The Stockton yard of Smiths Dock Co was purchased by National Shipbuilders Security for closure and dismantling, together with 7 other yards [14].

1932 The worst year for the yard was 1932 when it was only able to launch one motor trawler.

1936 The "Flower" class corvette based on the design of the whale-catcher Southern Pride, made its debut. 19 were made by the yard and 200 by other yards.

WWII: Smiths Dock are most famous for preparing the design of the Flower class corvette, an anti-submarine convoy escort of WWII.

1940 A number of yard employees were killed when the French corvetter La Bastiase was lost at sea.

1940s The yard made a number of cargo ships, tramps, colliers and the last case-oil carrier.

1946-1962 The yard focussed on building tankers with 41 being built during this period.

1955 Acquired the assets of Shields Engineering and Dry Docks Co and merged the 2 ship-repair organisations.

1965 The yard modified a number of oil exploration rigs, one of which Ocean Prince broke form its moorings due to high wind and blew down river for two miles colliding with tankers and bringing down power lines.

1966 The yard was sold to Swan Hunter with the yard becoming part of the Swan Hunter Group later in the same year.

1970s The yard started building partly refrigerated ships, and made a total of 15 such vessels in the 1970s. In the late 70s the yard was a member of British Shipbuilders, and the yard had a number of difficulties with ensuring its ships met contracted service speeds. It received penalty notices on late deliveries, some of which were refused by customers because of poor speed and malfunctioning equipment on board.

1977, the yard was incorporated into the nationalised group British Shipbuilders.

1987 The yard closed. Over 900 vessels had been built between 1910 and 1987. It has been used on and off by companies specialising in North Sea Oil work. The dry docks continue to be used.