Difference between revisions of "Sigmund Pumps" 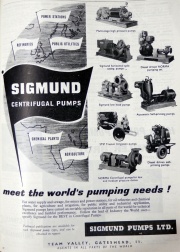 of Team Valley, Gateshead; and Reading

1937 Company founded by Miroslav Sigmund, Czechoslovakia, who had successfully tendered for a British government contract to make firefighting pumps.

1938 The Sigmund moved to Britain soon after Hitler's annexation of Austria. Sigmund Pumps (Great Britain) Ltd was founded at the Team Valley trading estate in Gateshead

Meanwhile his brother Jan, still in Lutin, sent machine tools, parts, and technical drawings to Gateshead, continuing after the German invasion in March 1939, but he was arrested in October 1940, and executed in 1942.