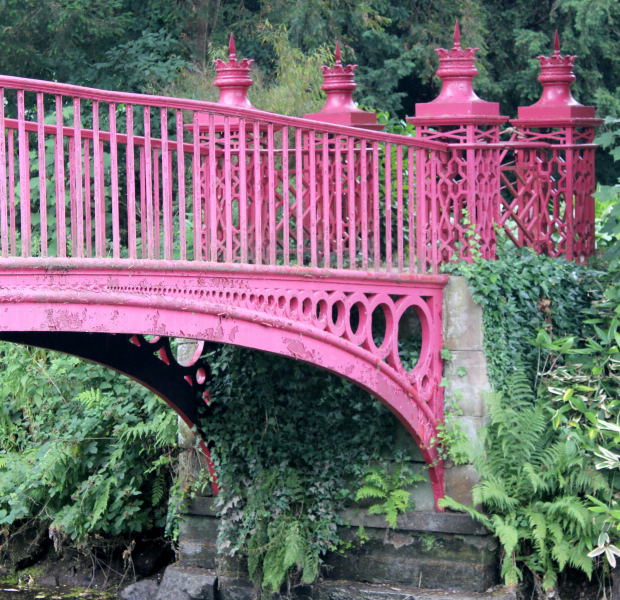 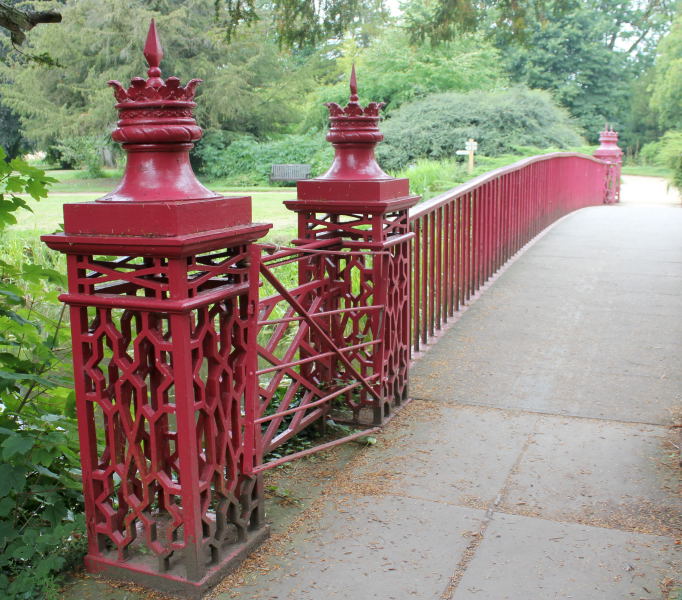 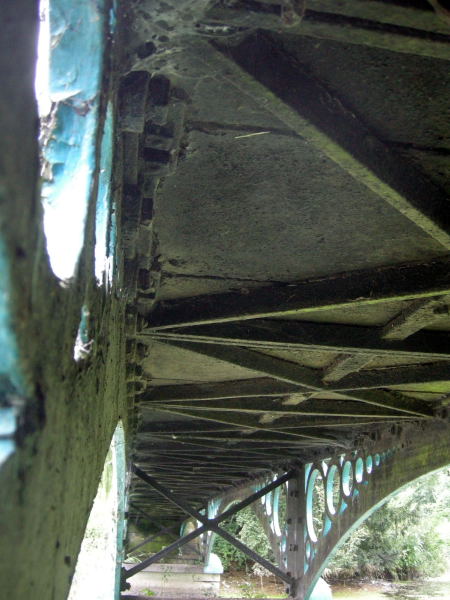 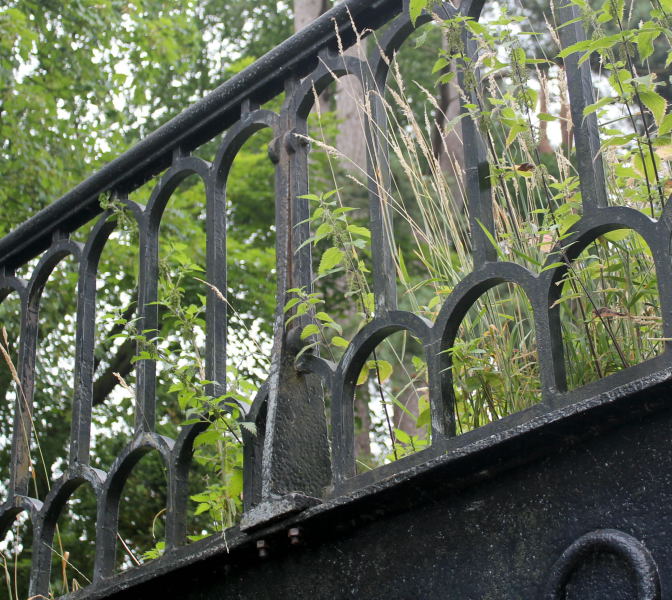 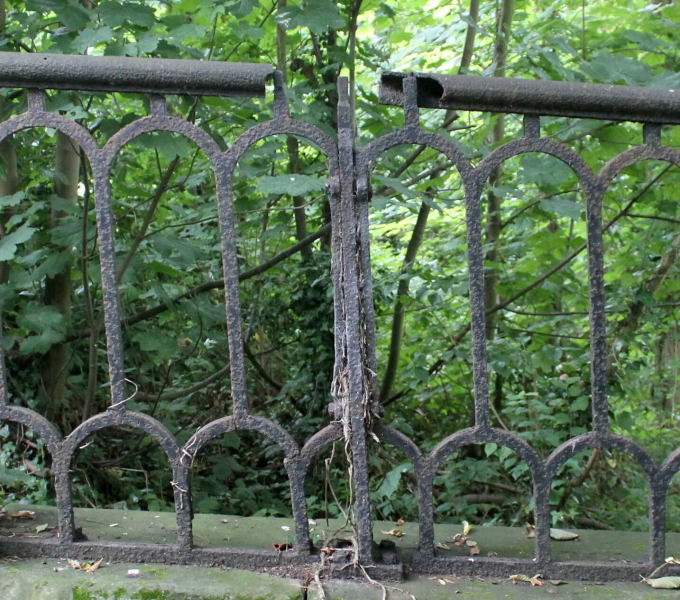 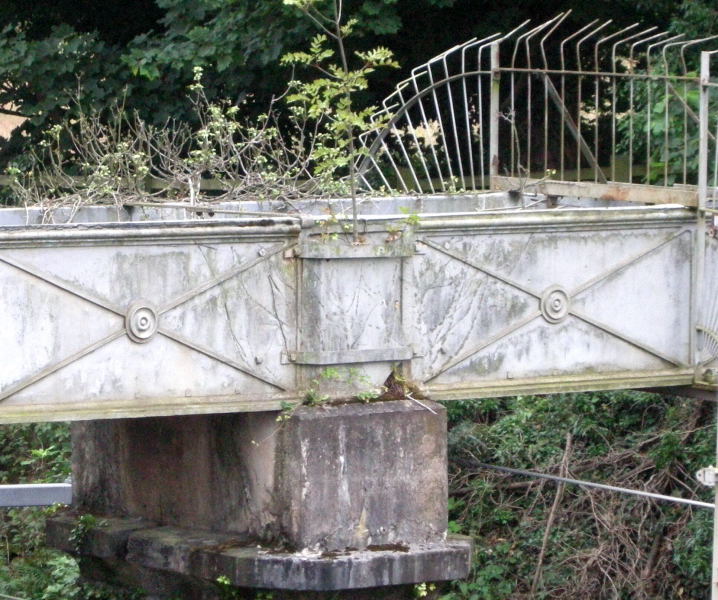 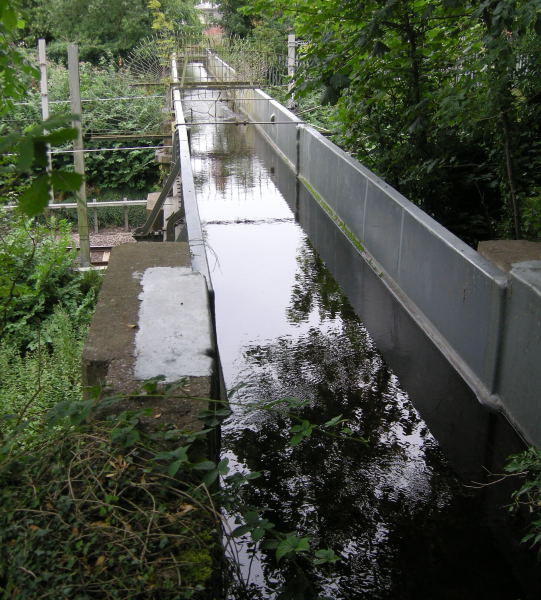 Several interesting bridges can be seen in or adjacent to Shugborough Historic Estate in Staffordshire.

There are two ornate cast iron footbridges on the estate, known as the Blue Bridge and the Red Bridge.

The fussy coronet castings on top of their gateposts lend a Victorian feel, but several sources state that the Red Bridge was built in 1813 (by Charles Heywood).[1]. Another source[2] gives the dates 1813 for the Blue Bridge and 1814 for the Red Bridge, the castings coming from John Toye of Rugeley. This source cites two sources, one being the Accounts of Charles Heywood (clerk of works on the estate). Coronet-topped gateposts of the same design as those on the Blue Bridge can be seen at the estate's entrance from Little Haywood, with its 1859 lodge (known as the Essex Lodge or Trent Lodge). See photo 5. Might the gateposts on the blue and red bridges be later additions?

The Red Bridge has a single span of 42 ft 6". Each arch appears to be a single casting, which is impressive for an early bridge of this size.

The vertical railings of both bridges are of cruciform section, apparently of wrought iron and presumably specially rolled. It appears from photo 13 that these are interconnected at the top by spigots passing through flat wrought iron bars, which are capped by lengths of cast iron handrail (photo 14).

The deck of the Blue Bridge is formed of cast iron panels. These have lugs on the sides for bolts which attach the deck panels to the arch members (photo 12). It is not clear how the bolts are fixed in the arch members. It is improbable that holes would have been drilled and tapped in the arch members. It is possible that the method was that used on many early iron bridges, namely using bolts with tapered square heads sitting in square countersinks. If so, the heads are very discretely fitted in this case. Additional support is given to the deck plates by rectangular iron bar frames with diagonal cross braces, and by a longitudinal bar. These components are probably wrought iron. See photo 12.

One of the approach roads to the estate (from Little Haywood) crossed the Trent and Mersey Canal by a cast iron bridge (surviving, see photos 15-20) and crossed the wide River Trent by a cast iron bridge having four spans of similar design to the canal bridge, but supported on cast iron columns (bridge demolished in the 1950s). c.1890 photo of Trent bridge here. The cast iron beams are of thin section and simple design.

The estate is also connected to Little Haywood by Essex Bridge, an historic packhorse bridge of fourteen arches. In the eighteenth century the bridge had about forty arches.[3]

A short distance east of Essex Bridge, the lane to Great Haywood crosses the Trent & Mersey Canal and then passes under the railway line by a skewed three arch masonry bridge, known by Network Rail as Bridge 141, Temple Bar/Trent Lane (photo 28). A short distance further south, the line crosses a lane leading to the iron canal bridge by small masonry bridge (visible in photo 19).

A small cast iron aqueduct carries a mill leat (Sher Brook) into the estate over the Trent Valley railway line, near the eastern entrance to the estate. See photos 23-27. The aqueduct was raised to accommodate the overhead wires when the route was electrified. A pair of the girders of the aqueduct appear to be recycled cast iron girders supplemented by wrought iron plates (photos 25 & 27). The aqueduct presumably dates from the mid 1840s, when the railway was constructed.