1931 photo, presumably showing the bridge after installing the new suspension cables but before removing the original chains. Newcastle Libraries image, stated to be in the public domain

A portion of chain from the bridge on display at the Discovery Museum, Newcastle. The painted notice states that a link was tested by Dorman, Long, and records test results. The results show that the iron had satisfactory tensile strength (20.5 tons per sq inch), but had very poor ductility and failed in a brittle manner 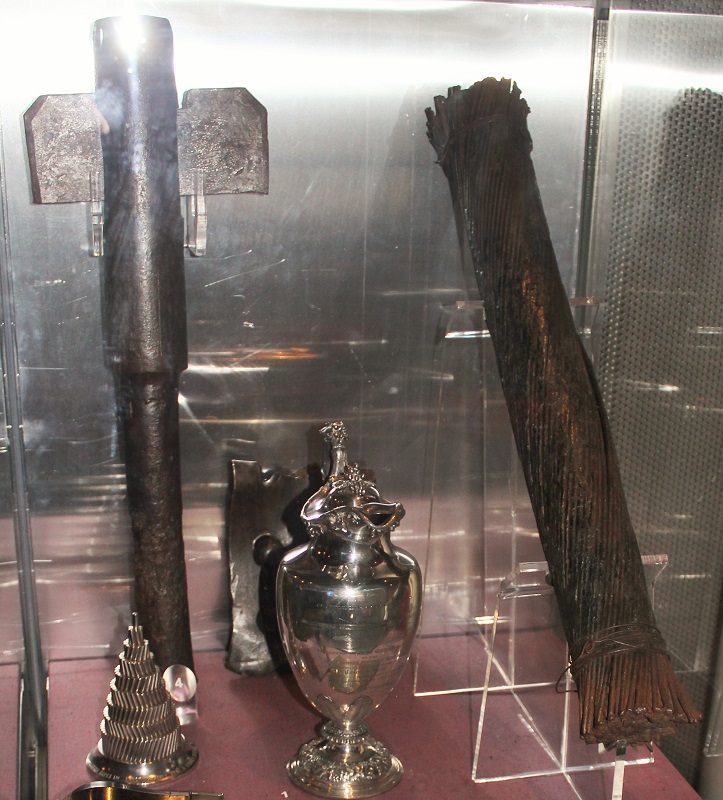 Display case at the Discovery Museum containing a length of the post-1931 suspension cable, and a wine jug presented to John Green, on the occasion of opening the bridge in 1831

Scotswood Bridge is one of the main bridges crossing the River Tyne in North East England. It links the west end of Newcastle upon Tyne on the north bank of the river with Blaydon in Gateshead on the south bank

The first bridge across the river at this location was the Old Scotswood Bridge, or "The Chain Bridge" as it was known locally. It was a suspension bridge with two stone towers, from which the road deck was suspended by chains. It was designed in 1829 John Green, with construction beginning that year. When it was opened on 16 April 1831 it was the first bridge over the River Tyne to be opened during Tyneside's industrial era.

The bridge was freed from tolls in 1907.

In 1931 the bridge needed to be strengthened and widened. The width was increased from 17 ft to 19.5 ft with two 6 ft footpaths. The suspension chains were replaced with steel wire ropes, and the decking was also strengthened, allowing the weight limit to be raised to 10 tons. The bridge eventually proved too narrow for the traffic it needed to carry and its increasing repair costs proved too much.

After standing for 136 years, it was closed and demolished in 1967 after its replacement had been completed.

Some of the original chain links and a deck suspender are on display in the Discovery Museum, Newcastle.

Photos of the bridge in its original and modified form, including 1967 demolition photos, may be found on the Co-Curate website.

A smaller suspension bridge, designed on very similar principles by John Green, and opened a few months after the Scotswood bridge, survives near Barnard Castle, in daily use by vehicles. See last photo here, and Whorlton Suspension Bridge.