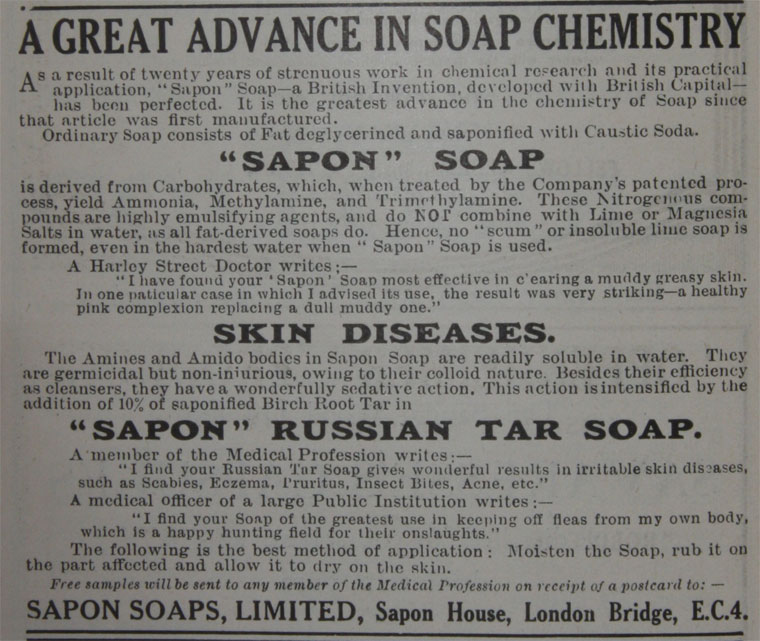 1921. From The Medical Journal

1900 An associated company, Sapon Ltd, was registered on 1 November, to acquire the rights and business connection of the patent soap powder known as "Sapon", for the whole world. [1]. Sapon was a washing-powder made from oatmeal. Among the main shareholders in the new venture were Robert Macpherson, the manager of the cooperage, and Godfrey Bamberg, the inventor of Sapon. Sapon Ltd took over Barrel Wharf, and soon the adjoining Lukach and Jarrahdale Wharves as well. The whole became known as Sapon Wharf.

By 1905 Sapon was a commercial success, supplied to the hotel and restaurant trades, railway companies, manufacturers, and shipping lines. It was stocked by Harrods, Whiteleys, Spiers & Ponds, and the other leading department stores. In the next few years Sapon's range of cereal soap powders and hard soaps grew rapidly. 'Russian Tar' medicated soap was introduced. 'Flake' was developed for the Yorkshire woollen trade as a decontaminant and degreaser.

1917 the company was reconstructed as Sapon Soaps Ltd

Postwar: manufacturing subsidiaries were established in Canada and the USA

1920s 'Derbac' insecticide soap was developed. Head office was transferred from the City to Wharf Road.

1923 Went into receivership. Taken over by Pure Products Ltd, a company set up for the purpose.

1924-5 Pure Products closed the works and transferred the manufacture of Sapon soaps to Nottingham.