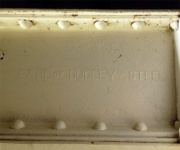 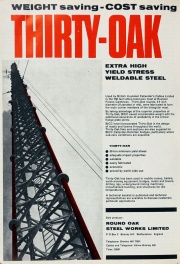 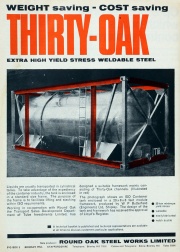 During the Industrial Revolution, the majority of iron-making in the world was carried out within 32 kilometres of Round Oak. At their peak, thousands of people were employed at the works.

1835 (or presumably 1838 when he reached maturity) William Ward, later the Earl of Dudley, inherited mines and other properties in the Dudley area.

1844 Mr. Richard Smith founded the works for Lord Dudley, having earlier established the Dudley works for him. Smith continued to manage them for many years, eventually being succeeded by his son as manager of the mills.[1]

1856 Iron-rolling mills, making the L.W.R.O. brand, were started, making use of pig iron made in the nearby blast furnaces.

1858 Conveyance of land and buildings at Round Oak from The Right Honourable George, Earl of Aberdeen to William, Baron Ward, which became the Round Oak Iron Works.[2]

Ward built railways from his coal mines to feed the works, including the Pensnett Railway

For many years the works concentrated on production of wrought iron of high quality.

Richard Smith was succeeded by his son, Frederick Smith, assisted by Mr. Smith Casson, as manager of the mills.[3]

1870. Visit of the Nawab of Bengal to the Round Oak Ironworks was described in an article in The Engineer 1870/10/21 which states that 'it is due to the late Mr. Richard Smith and his son, Mr. Frederick Smith, that the vast resources of the Earl's estates have been developed and brought to their present state of perfection.'

1889 In order to find an additional outlet for bar iron, the company embarked on the manufacture of ships' cables.

About this time steel production was introduced to the works[5]

1891 Incorporation of the Earl of Dudley's Round Oak Iron & Steel Works Ltd.

1893 Construction of the steel works began; the first cast was made in August 1894.

1908 Took over the Old Level Ironworks, also in the Brierley Hill district, for many years carried on under the style of Henry Hall and Co. Intended to restart he ironworks but in the interim some of the machinery at Round Oak was removed to the Old Level works, which had been remodelled, and a considerable quantity of modern machinery installed. [7]

1953 Sold by the Holding and Realization Agency to Tube Investments for £1.6million, and loans of £4.2million to be repaid shortly[12].

The steelworks was the first in the United Kingdom to be converted to natural gas, which was supplied from the North Sea.

1966 In September, the 3½ mile long railway between the steelworks and Baggeridge closed.

1967 As one of the 14 largest steel groups, representing about 90 per cent of the UK's steel making capacity, Tube Investments's steel-making subsidiaries (Park Gate Iron and Steel Co, Round Oak Steel Works)) were brought into public ownership as part of the British Steel Corporation[13]. It was agreed that Tube Investments would share the management of the Round Oak Steel Works in order to enable TI to maintain its international position in tube making[14].

By the 1970s, the factory's viability and profitability began to decline due a fall in demand for its products.

1970 Major investment by TI in 2 new electric furnaces and and a new mill to replace open hearth furnaces and finishing plants[15].

At its peak some 3,000 people were employed at the plant,

By 1979 the jobs cuts began and the plant's future was thrown into serious doubt.

1981 The farmland in the shadow of Round Oak Steelworks was designated by the Government as an Enterprise Zone.

1982 Finally closed on 23 December 1982, by which time 1,286 people were working there after being in operation for 125 years. This brought high levels of unemployment to the local area. Demolition work took place shortly afterwards. Just before its closure, the works employed over 3,000 people.[16]

1985-89 The area was developed as the Merry Hill Shopping Centre by Don and Roy Richardson. It brought thousands of jobs to the local area and spearheaded a region-wide transition from manufacturing to services as the key employer of local workers.

1986 Despite the closure of the works, a steel terminal was opened on the adjacent railway in August and is still in use.

1990 The first businesses did not move onto the steelworks site until 1990, when the Copthorne Hotel was opened. A former warehouse on the site has been converted into a pub, the Brewer's Wharf.

BURSTING OF A FLY WHEEL. REMARKABLE SMASH AT ROUND OAK WORKS. An accident, exposing a number of men to peril, and occasioning considerable financial loss, took place at the Earl of Dudley's Round Oak Ironworks during Friday night. Heavy bars were being rolled, when the great fly-wheel, some 17 tons in weight, suddenly broke into many pieces, and at the same time the driving wheel and a valuable steel wheel were also broken up, in consequence, it is believed, portions of the fly-wheel striking them. Providentially, the heavy pieces of metal were not scattered about, but fell mainly into the wheel hole. The accident put a stop to the operations for the time being. The Round Oak Ironworks were established by the late Earl of Dudley about the middle of the last century, and the flywheel which has collapsed was part of the original machinery laid down. It is somewhat singular that the accident has happened at the present time, when the men were on fourteen days' notice to terminate their engagements, the intention of the firm being, as soon as convenient, to restart the Old Level Ironworks, also situated in the Brierley Hill district, which were for many years carried on under the style of Henry Hall and Co., and were taken over some months ago. In the interim some of the machinery at Round Oak has been removed to the Old Level works, which have been remodelled, and a considerable quantity of modern machinery installed. The accident at Round Oak is not attributed to any misconduct on the part of employees. [17]