Difference between revisions of "Robert Dumas" 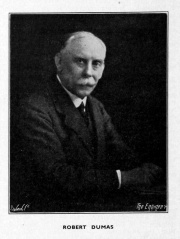 1865. Born at Weldon Bucks and educated at Bristol Grammar School and Anderson College, Glasgow. Worked for BTH for 31 years. Did his apprenticeship with the Fairfield Shipbuilding and Engineering Co.

1908 May. Joined the BTH Co as manager of the Rugny Works, but after 1929 acted in a consultative capacity.

He did a lot of work for the British Standards Institution.

"MR. ROBERT Dumas was known to a great number of engineers and the news of his death on November 20th, at his home in Leamington Spa, will be received with real sorrow. Until last June he was a prominent member of The British Thomson-Houston Company's staff with whom he bad served for 31 years; but his activities did not end in the service of his company, and in particular the part he played in the work of the British Standards Institution will never be forgotten.

Mr. Dumas, who was born in 1865 at Weldon, Bucks, was educated at Bristol Grammar School and Anderson College, Glasgow, and served his apprenticeship with the Fairfield Shipbuilding Co. He was Mechanical Superintendent at the Stafford Works of Siemens Brothers and Co., Ltd., till 1903; then Works Manager for The General Electric Company, Ltd., Witton, till 1906 ; and then Works Manager for Bruce Peebles and Co., Ltd., Edinburgh, till 1908. The experience he accumulated in those early days, together with his extraordinary knowledge of engineering matters, placed him in the front rank of mechanical engineers.

He joined the B.T.H. Company in May, 1908, as Manager of the Rugby Works, but after 1929 acted in a consultative capacity. His love of work and his untiring energy, coupled with a pleasant personality and human understanding, made him a natural leader of men ; and the freedom from labour troubles which the company enjoyed under his guidance was a tribute to his fairness in dealing with labour problems...Read more

ROBERT DUMAS will be remembered for his great work for the British Standards Institution, particularly in connection with the adoption of a national system of limit gauges.

He was born at Weldon, Bucks, and educated at Bristol Grammar School and Anderson College, Glasgow. From 1883 to 1888 he served his apprenticeship at the Fairfield Shipbuilding and Engineering Company, Ltd., at Govan, Glasgow, and in the latter year he gained a Whitworth Exhibition. Subsequently he was employed by Messrs. R. and W. Hawthorn, Leslie and Company, Ltd., on the installation of marine engines and sea trials of HMS Magicienne and HMS Marathon. After working for a year in the scientific office of Messrs. Richardsons, Westgarth and Company, Ltd., of Hartlepool, he joined Messrs. Westray, Copeland and Company, of Barrow-in-Furness, becoming chief draughtsman in 1893.

He then entered the Woolwich works of Messrs. Siemens, Brothers and Company, Ltd., where he spent two years in the drawing office, and was then appointed manager of the dynamo department; he was later transferred to the firm's new works at Stafford, where he was largely concerned with the layout of the new buildings. In 1903 he joined the General Electric Company as works manager at Witton, and three years later was appointed to a similar position. with Messrs. Bruce Peebles and Company, of Edinburgh. He began his long connection with the British Thomson-Houston Company in 1908, on his appointment as manager of the Rugby works. After his retirement in 1929 he continued to act in a consultative capacity for the firm. At the works he instituted a measuring room, equipped with accurate standards. He was also responsible for devising a method of building commutators which was both scientific and practical, and constituted a notable development.

During the war of 1914-18 he organized the Coventry works of the firm for the manufacture of magnetos for aircraft, and he also served on a committee on gauges at the Ministry of Munitions. He was a member of the Cutting Tools Research Committee of the Institution from its inception in 1919. He also served on several of the committees of the British Standards Institution, and made valuable contributions in this direction. Mr. Dumas latterly lived at Leamington Spa, where his death occurred on 20th November 1939 in his seventy-fifth year. He was elected an Associate Member of the Institution in 1895 and was transferred to Membership in 1908.