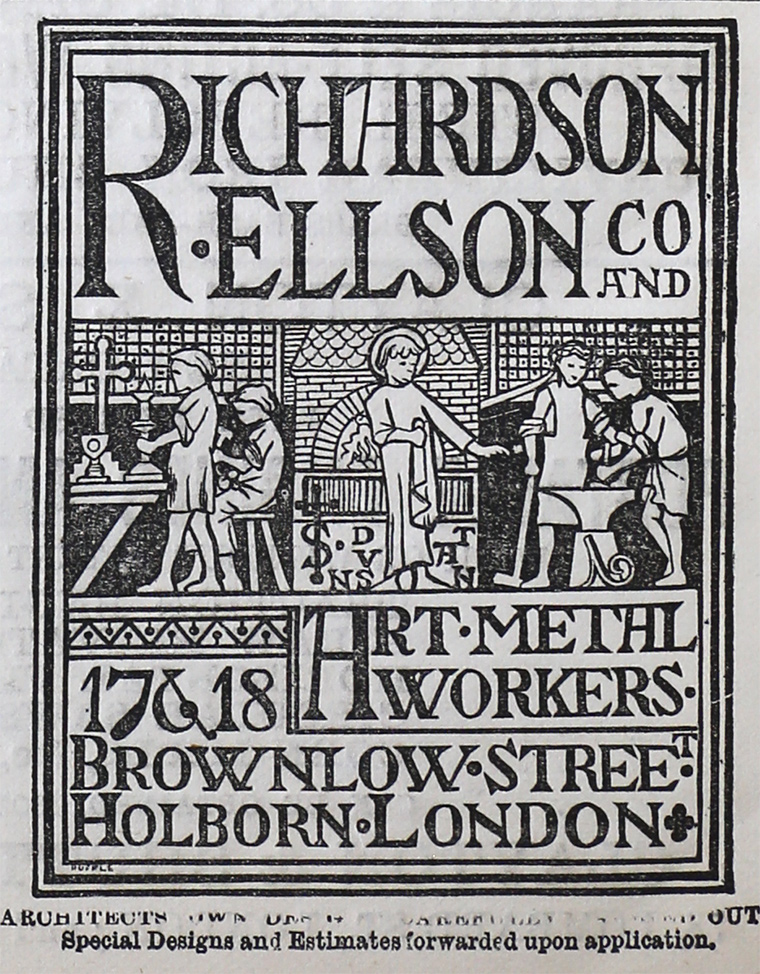 Successors at Brownlow Street to Richardson, Slade and Ellson

1884 Dissolution of the Partnership between Frederick Nettlefold, William Richardson, John Dove Ellson, and Edward Nettlefold, carrying on business as Manufacturers and Sellers of Mediaeval Iron Work and Metal Work, at Lower Ford-street, Coventry, in the county of Warwick, at Nos. 17 and 18, Brownlow street, in the county of Middlesex, and at 243 1/2, High Holborn, in the said county of Middlesex, under the style or firm of Richardson, Ellson, and Co., so far as regards the said John Dove Ellson, but no further, as from the 1st day of January, 1884. All debts due from and owing to the said late partnership will be paid and received by the said Frederick Nettlefold, William Richardson, and Edward Nettlefold, who will in future continue carry on the said business under the firm or style of W. Richardson and Co., on their own account.[1]

1894 Dissolution of the Partnership between Frederick Nettlefold, William Richardson, and Edward Nettlefold, at 17 and 18, Brownlow-street, High Holborn, in the county of London, and the Elm Works, Garrett-lane, Wandsworth, in the county o£ Surrey, Manufacturers and Mediaeval Metal Workers, Gas and Hot Water Engineers, under the style or firm of Richardson, Ellson, and Co. All debts due to and from the late Partnership will be received and paid by the said William Richardson.[2]