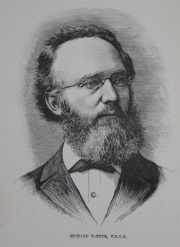 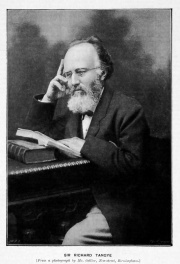 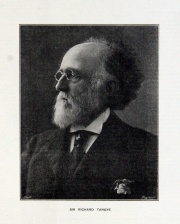 Richard Tangye (24 November 1833 - 14 October 1906) was a British manufacturer of engines and other heavy equipment.

He was born at Illogan, near Redruth, Cornwall, the son of a small farmer Joseph Tangye (1798-1854) and his wife Ann (Nee Bullock). As a young boy he worked in the fields, but when he was eight years old he was incapacitated from further manual labour by a fracture of the right arm. His father then determined to give him the best education he could afford, and young Tangye was sent to the Friends' School at Sidcot, Somerset, where he progressed rapidly and became a pupil-teacher.

1852 Tangye was not long with this position before he became dissatisfied and, through an advertisement in "The Friend", he obtained a clerkship in a small railway engineering firm in Birmingham (Thomas Worsdell's), where his brother George soon joined him. Here Richard Tangye obtained a complete mastery of the details of an engineering business, and introducing the system of a Saturday half-holiday which was subsequently adopted in all English industrial works.

In 1856 he started in business in a small way in Birmingham as a hardware factor and commission agent. His first customers were the Cornish mine-owners in the Redruth district, and, the business prospering, he was able before long to start manufacturing hardware goods on his own account. James Tangye had already set up as a machine tool manufacturer. Soon Richard joined his brother, and they were joined by their brothers George and Joseph, in the enterprise that was to become Tangye Brothers. The speciality of the brothers Tangye was the manufacture of machinery, and their hydraulic lifting jacks were successfully employed in the launching of the steamship Great Eastern.

In 1858 the firm, who now confined themselves to making machinery, built their own works, and shortly afterwards secured the sole right of manufacturing the newly invented differential pulley-block, thereby materially adding to their business, which came to include every kind of power-machine - hydraulic, steam, gas, oil and electricity. The business was subsequently turned into a limited company, and in 1894 Richard Tangye was knighted. He died in October 1906.

1861 Engine maker, living in Birmingham with his wife Caroline[2]

1872 Continued the businesses after 2 of his brothers retired

He was born on November 24th, 1833 at Broad Lane in the parish of Illogan, Cornwall, and died at Coombe bank, Kingston Hill, on the 14th inst., thus just missing by a few weeks the completion of his seventy-third year.

Sir Richard himself was not an engineer, but a commercial man of infinite shrewdness and ability . . . . [much more]