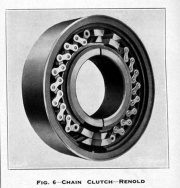 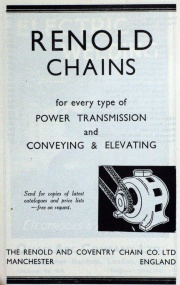 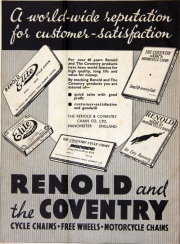 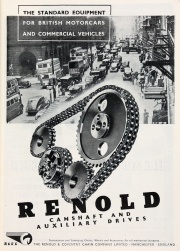 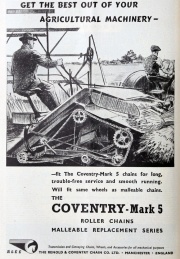 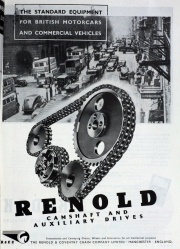 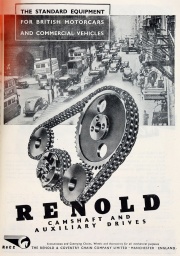 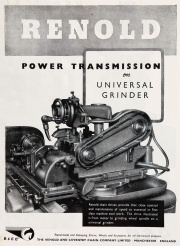 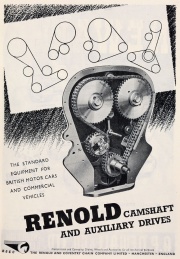 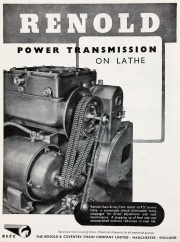 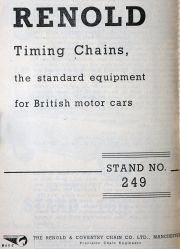 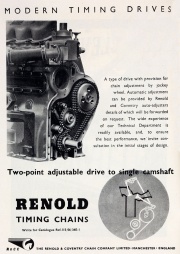 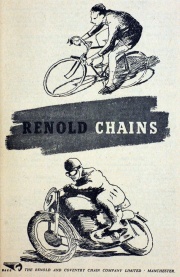 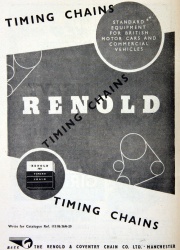 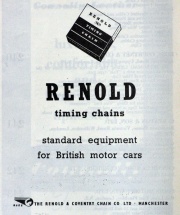 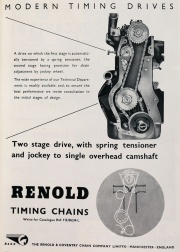 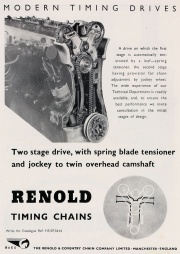 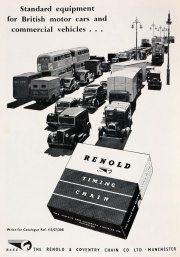 1932 Chain supplied had chamfered plates, some being doubled chamfered (i.e. both sides). Patented the early design of bi-planar chain, (The patent being applied for in 1928).

1933 Supplied chain with a notched bush.

1933 Acquired the goodwill and stock in trade of Alfred Appleby Chain Co and Atlas Chain Co and the pressed lug part of the business of Charles H. Pugh Ltd[2]

1937 Agreement with Tube Investments that the company would discontinue the manufacture and sale of cycle fittings and accessories; the general business in chains and transmissions would continue as before[3].

1937 The Birmingham works and the Brampton cycle fittings business, which was concentrated there after the merger, were disposed of.

WWII During the Second World War, temporary premises were leased at Newton Mill in Hyde, Cheshire, for arms-related production.

1946 A new factory in Cardiff was acquired in 1946; this took over the wheel manufacturing department previously at Burnage and also manufactured chain clutches and couplings. An Australian manufacturing subsidiary was set up in 1949.

The 1950s saw the expansion of Australian sales and manufacturing operations.

1954 The sales division and administrative services departments moved from Burnage to the new Renold House in Wythenshawe, Manchester. By this point the company had built up a world-wide sales organisation based on its selling subsidiaries and its agencies, which covered over seventy countries.

1954 Company becomes Renold Chains Ltd. and introduced their improved design of bi-planar chain with their patent.

1960s In addition to the Holroyd merger, the 1960s saw expansion in Europe.

1972 In 1970, the company had gained a controlling interest in a firm in Auckland, New Zealand. This began manufacturing worm gear units in 1972, as Renold Christian Ltd.

The 1970s also saw the acquisition of manufacturing bases in the U.S.A. The Ajax Flexible Coupling Co. Inc., of Westfield, New York State, was acquired in 1972, and Atlas Chain and Precision Products Co. Inc., of West Pittston, Pennsylvania, in 1974.

1998 In December, Renold acquired A. A. Jones and Shipman in the UK, and with it a range of precision production and tool room grinding machine tools, "superabrasive" machine tools from Edgetek in the USA and electronic control systems from Goodwin in the UK.

2000 In March, the company acquired Jeffrey Chain a leading manufacturer of industrial chain in the USA. Jeffrey Chain has strong US brands and established relationships with major US distributors, of power transmission equipment, and original equipment manufacturers.