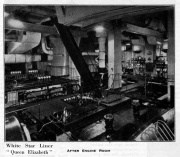 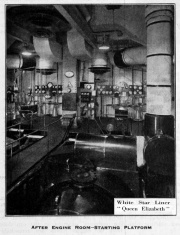 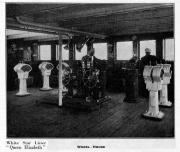 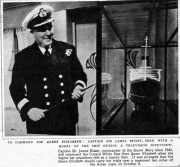 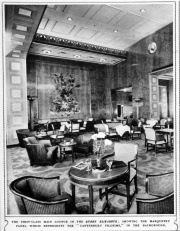 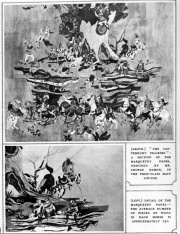 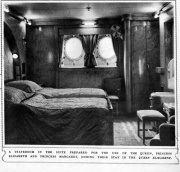 October 12 1946. Stateroom in the suite used by the pricesses, Elizabeth and Margaret. 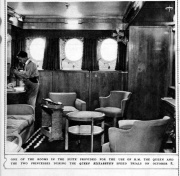 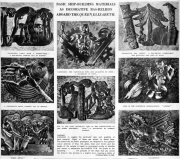 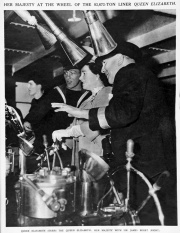 1946. Moving up New York Harbour on October 21st, with on either side, fire-floats raising plumes of water in a gesture of welcome.

Built as a replacement for the RMS Aquitania.

Queen Elizabeth was an ocean liner which sailed the Atlantic Ocean for the Cunard Line (then the Cunard White Star Line when the vessel was launched) and was contracted to carry Royal Mail.

At the time of construction in the 1930s by John Brown and Co the vessel was known as Hull 552, later she was named in honour of Queen Elizabeth (who was Queen Consort at the time of her launch in 1938) and she was the largest passenger liner ever built at that time, which was a record that would not be exceeded for 56 years. She was a slightly larger ship with an improved design over her running mate, the RMS Queen Mary.

She first entered service in 1940 as a troopship in the Second World War, and it was not until 1946 that she served in her intended role as an ocean liner until her retirement in 1968.

Together with the Queen Mary, the Queen Elizabeth maintained a two ship weekly transatlantic service from Southampton to Cherbourg to New York for over twenty years.

Following a fire, she was scrapped in Hong Kong in 1975.