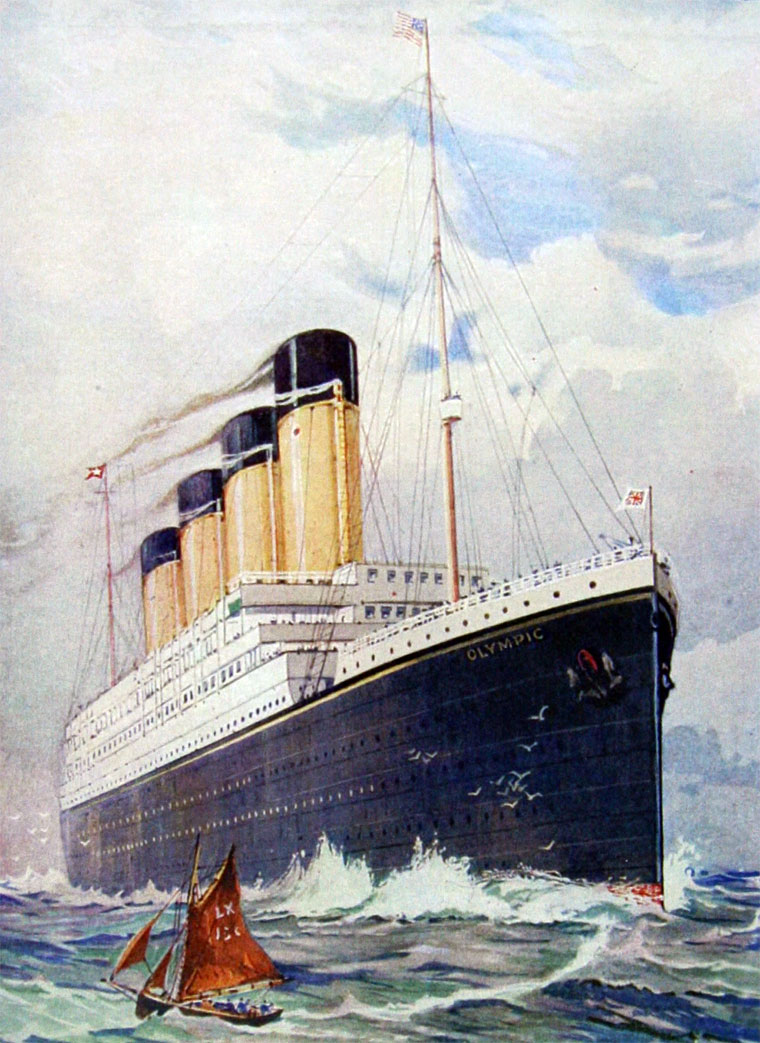 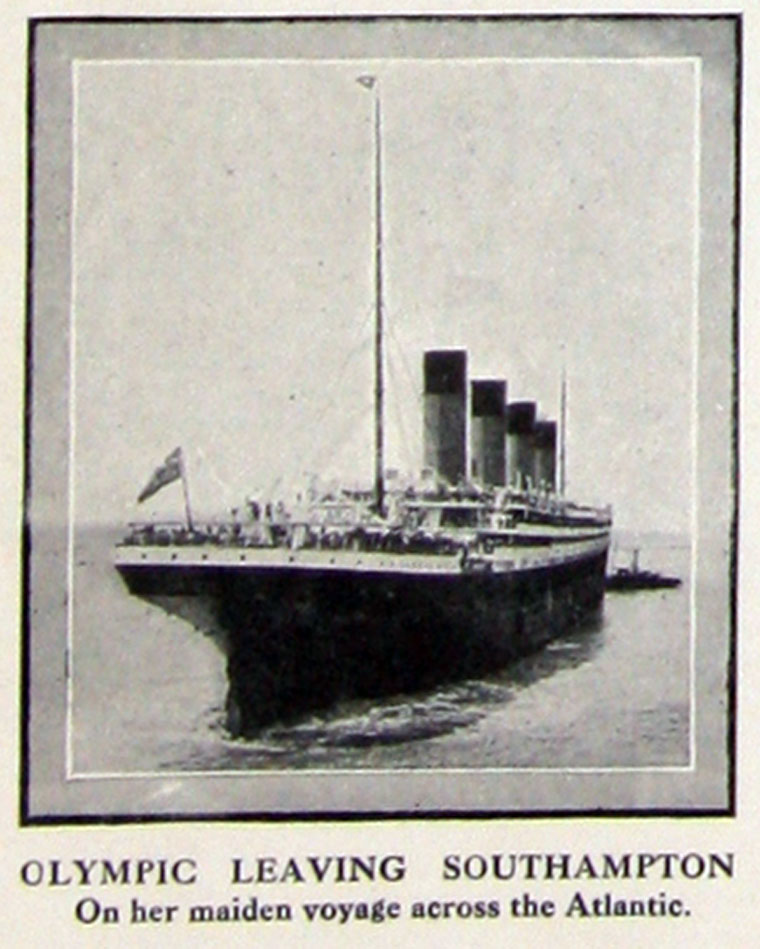 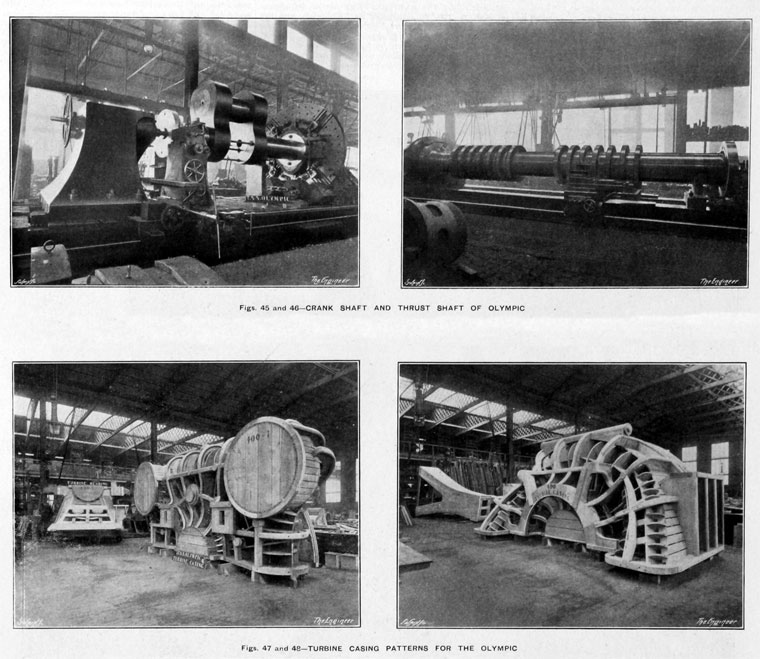 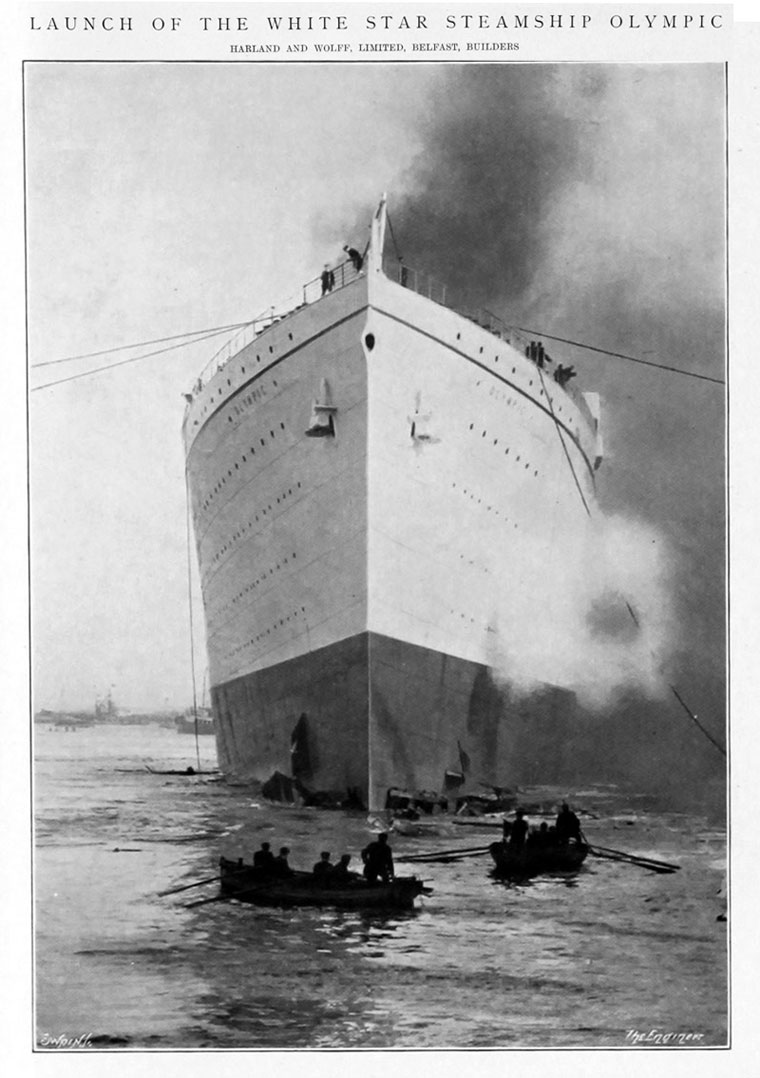 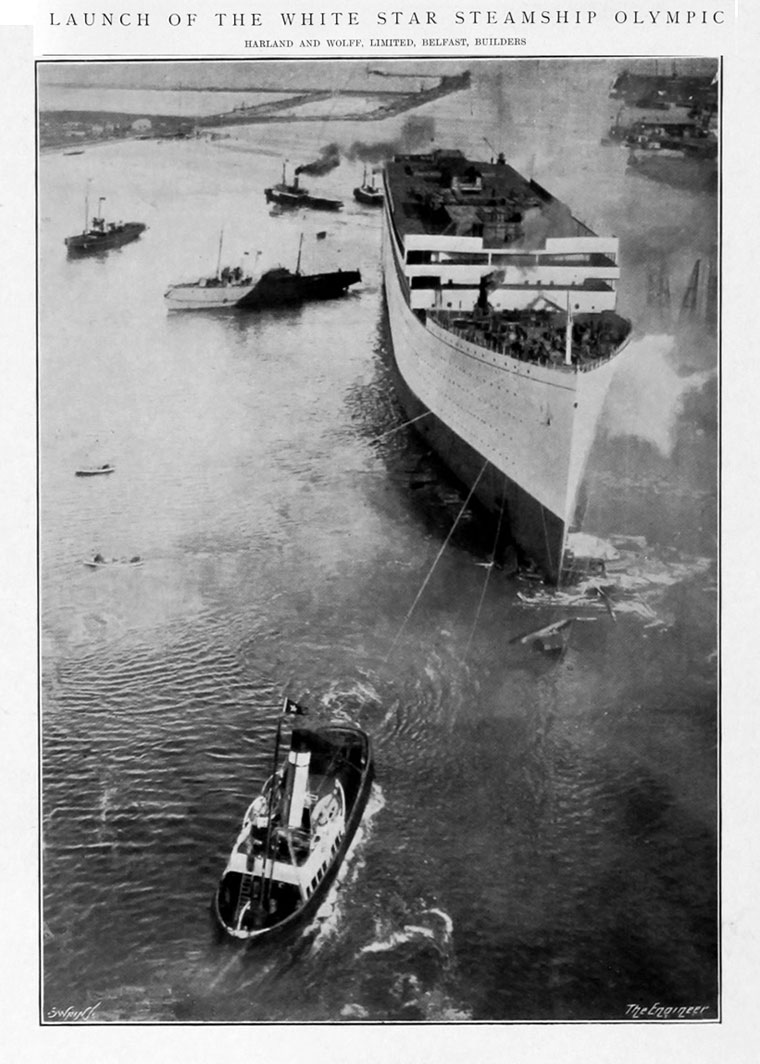 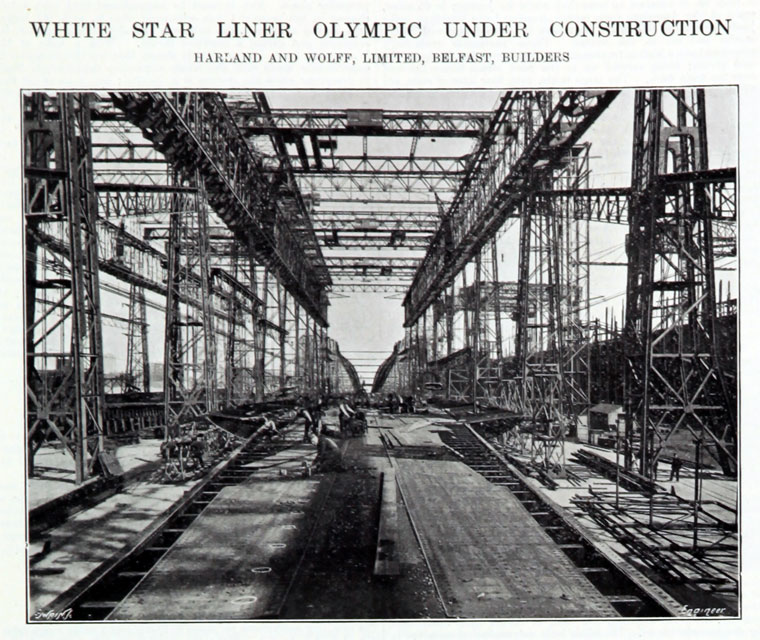 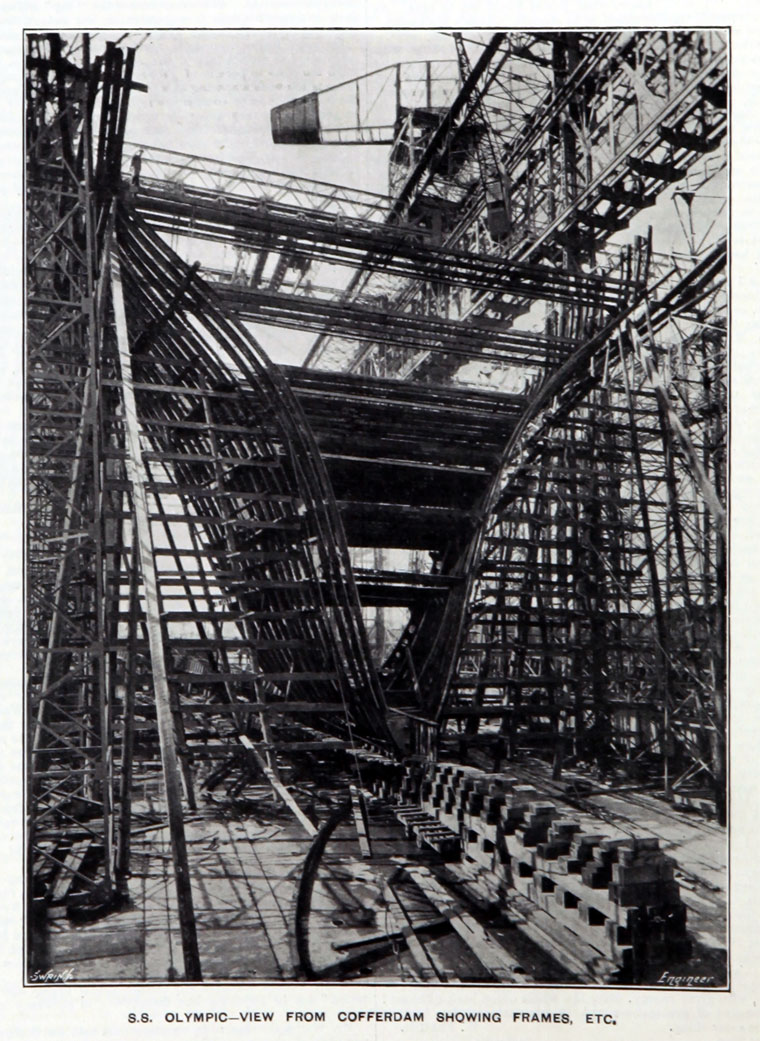 18th November 1909. View showing work on the Olympic and the RMS Titanic. 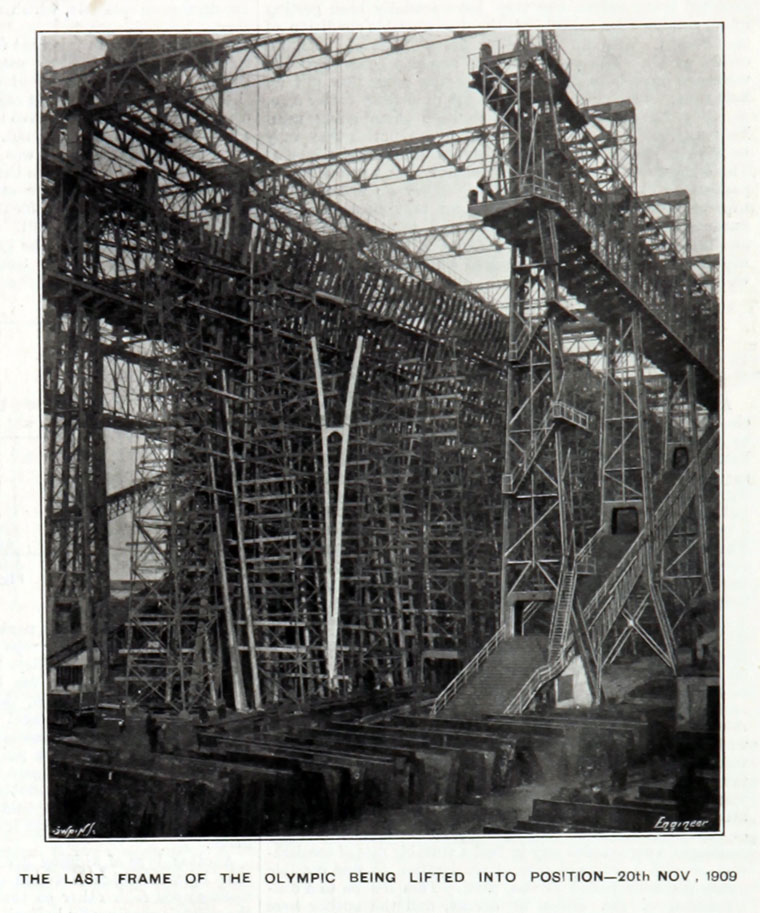 20th November 1909. The last frame of the Olympic being lifted into place.

1909. Boss arms of the Olympic being weighed.

1914. The Gym in the White Star Liner supplied by Messrs Rossel, Schwarz and Co.

The White Star Liner, RMS Olympic was built by Harland and Wolff at Belfast.

RMS Olympic was the lead ship of the Olympic-class ocean liners built for the White Star Line, which also included Titanic and Britannic.

Unlike her ill-fated younger sisters, Olympic served a long and illustrious career (1911 to 1935), including service as a troopship during World War I, earning the nickname "Old Reliable." She was the largest ocean liner in the world for two periods in 1911–13, interrupted only by the brief career of the slightly larger Titanic.

Joseph Bruce Ismay, the chairman of White Star Line, and William James Pirrie, the chairman of Harland and Wolff shipyard, intended the Olympic-class ships to surpass rival Cunard's largest ships, Lusitania and Mauretania, in size and luxury. Construction of the Olympic began three months before Titanic to ease pressures on the shipyard. Several years would pass before Britannic would be launched.

In order to accommodate the construction of the class, Harland and Wolff upgraded their facility in Belfast; the most dramatic change was the combining of three slipways into two larger ones. Olympic's keel was laid in December 1908 and she was launched on 20 October 1910. For her launch, the hull was painted in a light grey colour for photographic purposes (a common practice of the day for the first ship in a new class, as it made the lines of the ship clearer in the black and white photographs). Her hull was repainted following the launch.

Her maiden voyage commenced on 14 June 1911. Designer Thomas Andrews was present for the passage to New York and return, along with a number of engineers, as part of Harland and Wolff's "Guarantee Group" to spot areas for improvement.

Olympic had a cleaner, sleeker look than other ships of the day: rather than fitting her with bulky exterior air vents, Harland and Wolff used smaller air vents with electric fans, with a "dummy" fourth funnel used for additional ventilation. For the powerplant Harland and Wolff employed a combination of reciprocating engines with a centre low-pressure turbine, as opposed to the steam turbines used on Cunard's Lusitania and Mauretania. White Star claimed the Olympic class's engine set-up to be more economical than expansion engines or turbines alone. Olympic consumed 650 tons of coal per twenty four hours with an average speed of 21.7 knots on her maiden voyage, compared to 1,000 tons of coal per twenty four hours for both the Lusitania and Mauretania.

Olympic's first major mishap occurred on 20 September 1911, when she collided with a British warship, HMS Hawke off the Isle of Wight. Although the incident resulted in the flooding of two of her compartments and a twisted propeller shaft, Olympic was able to return to Southampton under her own power.

At the subsequent inquiry the Royal Navy blamed Olympic for the incident, alleging that her large displacement generated a suction that pulled Hawke into her side. In command during this incident was Captain Edward Smith, who was lost at sea a year later onboard Titanic. One crew member, Violet Jessop, survived not only the collision with the Hawke but also the later sinking of Titanic and the 1916 sinking of Britannic, the third ship of the class.

The Hawke incident was a financial disaster for Olympic's operator, and keeping her out of revenue service made matters worse. Olympic returned to Belfast, and to speed up her repair, Harland and Wolff was forced to delay Titanic's completion in order to use her propeller shaft for Olympic. In February 1912, Olympic lost a propeller blade, and once again returned to her builder for repairs. To get her back to service as soon as possible, Harland & Wolff again had to pull resources from Titanic, delaying her maiden voyage from 20 March 1912 to 10 April 1912.

On 14 April 1912, Olympic, now under the command of Herbert James Haddock, received the distress call from her sister Titanic and headed to assist in the rescue.

Olympic, like Titanic, did not carry enough lifeboats for everyone on board, and was hurriedly equipped with additional, second-hand collapsible lifeboats following her return to England. Towards the end of April 1912, as she was about to sail from Southampton to New York, the ship's firemen went on strike because of fears that the ship's new collapsible lifeboats were not seaworthy. The 40 collapsible lifeboats were secondhand, having been transferred from troopships, and many were rotten and could not open. The men instead sent a request to the Southampton manager of the White Star Line that the collapsible boats be replaced by wooden lifeboats; the manager replied that this was impossible and that the collapsible boats had been passed as seaworthy by a Board of Trade inspector. The men were not satisfied and ceased work.

On 25 April a deputation of strikers witnessed a test of four of the collapsible boats. Only one was unseaworthy and they said that they were prepared to recommend the men return to work if it was replaced. These terms were accepted. However, the deputation said that they would not sail aboard the Olympic unless the strikebreakers were removed, a condition which the company refused to accept, saying that they would rather abandon the sailing than dismiss loyal men.

All 54 strikers were arrested on a charge of mutiny when they went ashore. On 4 May 1912 Portsmouth magistrates found the charges against the mutineers were proven, but discharged them without imprisonment or fine due to the circumstances of the case. Most of the strikers returned to work and the Olympic sailed on 15 May.

On 9 October 1912 White Star withdrew Olympic from service and returned her to her builders at Belfast to be refitted to incorporate lessons learned from the Titanic disaster. A complement of 64 wooden lifeboats were installed along the boat deck, stacked two high. In addition, an inner watertight skin was constructed in the boiler and engine rooms and some of the watertight bulkheads were extended up to B-deck. At the same time, alterations and additions to her passenger cabins were carried out on B Deck which necessitated deleting her B Deck promenades – one of the few features that separated her from her sister ship. With these changes, Olympic's gross tonnage rose to 46,359 tons, 31 tons larger than Titanic's.

In 1913, Olympic returned to service and briefly regained the title of largest ocean liner in the world, until SS Imperator entered passenger service in June 1913.

In World War I, Olympic initially remained in commercial service under Captain Herbert James Haddock. She sailed from New York on 21 October 1914 for Britain, though carrying very few passengers, as Germany had announced that her U-boats would sink the Olympic on sight and most of the passengers had cancelled.

In 1934, Olympic again struck a ship. The approaches to New York were marked by lightships and Olympic, like other liners, had been known to pass close by these vessels. On 15 May 1934, Olympic, inbound in heavy fog, was homing in on the radio beacon of Nantucket Lightship LV-117. Now under the command of Captain John Binks, the ship failed to turn in time and sliced through the smaller vessel, which broke apart and sank. Four of the lightship's crew went down with the vessel and seven were rescued, of whom three died of their injuries – thus there were seven fatalities out of a crew of eleven. Three of the lightship's surviving crewmen were interviewed by the newsreels immediately after the accident.

In 1934, the White Star Line merged with the Cunard Line at the instigation of the British government. This merger allowed funds to be granted for the completion of the future RMS Queen Mary. Cunard White Star then started retiring its surplus tonnage, which included the majority of the old White Star liners. Olympic was withdrawn from service in 1935 and sold to Sir John Jarvis for £100,000 to be partially demolished at Jarrow, providing work for the region.

In 1937, Olympic was towed to Inverkeithing to T.W. Ward's yard for final demolition.

Olympic's fittings were auctioned off immediately before she was scrapped; some of her fittings, namely those of the first-class lounge and part of the aft grand staircase, can be found in the White Swan Hotel, in Alnwick, Northumberland, England. Some fittings and panelling also ended up at a Haltwhistle paint factory. The rest of her fittings found homes in scattered places throughout Great Britain.

In 2000, Celebrity Cruises purchased some of Olympic's original wooden panels and created the RMS Olympic restaurant on board their newest cruise ship at the time, Millennium. According to Celebrity Cruise Line, this wood panelling once lined Olympic's à la carte restaurant.

The clock depicting "Honour and Glory Crowning Time" from Olympic's grand staircase was on display at the Southampton Maritime Museum - now The SeaCity Museum. Note:- the panel only is now on display.