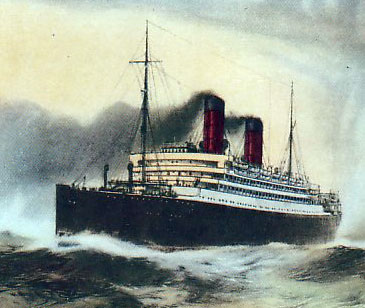 RMS Carmania was a British ocean liner designed by Leonard Peskett and built by John Brown and Co for the Cunard Line.

When launched, the Carmania and her sister ship, the RMS Caronia, were the largest ships in the Cunard fleet and two of the fastest in the world, since they had been designed to compete with the Germans for the Blue Riband. The Carmania had steam turbines, and the Caronia had quadruple-expansion engines.

Another feature that differentiated the two liners was that Carmania had two tall forward deck ventilator cowls while they were absent on Caronia.

The Carmania travelled the New York-Liverpool route from 1905 to 1910, suffering one major fire in June 1910.

In October 1913, while eastward bound, she responded to a distress call from the Volturno to pick up survivors in a storm, resulting in many awards for gallantry being presented to various members of her crew and Captain James Clayton Barr.

Following the outbreak of World War I, the Carmania was converted into an armed merchant cruiser, equipped with eight 4.7 inch guns, and put under the command of Captain Noel Grant. She sailed from Liverpool to Shell Bay in Bermuda. She subsequently engaged and sank the German merchant cruiser SMS Cap Trafalgar during the Battle of Trindade. The ship suffered extensive damage herself and several casualties to her crew. Ironically, the two ships had been disguised as each other. After repairs in Gibraltar she patrolled the coast of Portugal and the Atlantic islands for the next two years.

In 1916 she was summoned to assist in the Gallipoli campaign. From May 1916 she was used as a troop ship. After the War she transported Canadian troops back from Europe.

In early 1920, she returned to passenger liner service, being refitted in 1923.

In 1932, she was sold to Hughes, Bolckow and Co, and scrapped at Blyth.