Grace's Guide is the leading source of historical information on industry and manufacturing in Britain. This web publication contains 144,263 pages of information and 230,174 images on early companies, their products and the people who designed and built them. 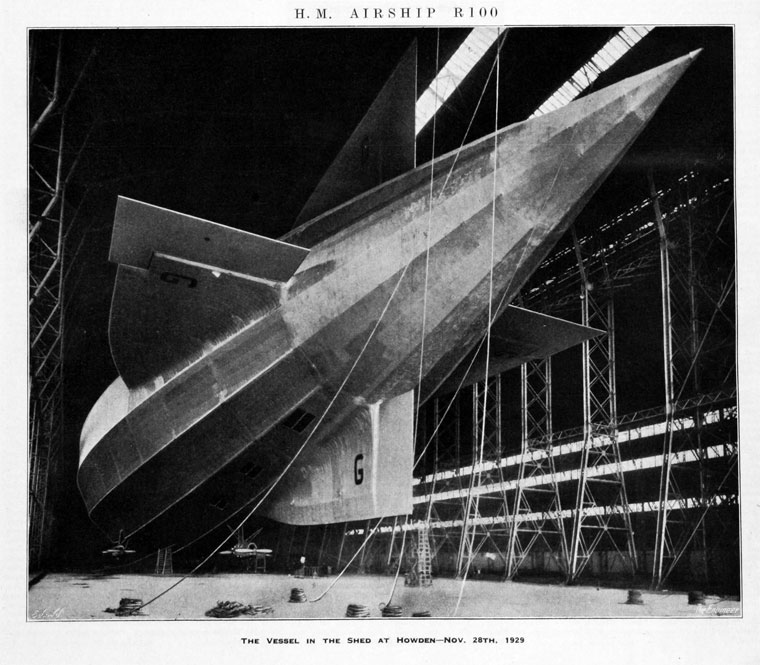 1929.One of the Gas Bags inflated and Twin Engined Power Car.

The HM Airship R100 was a rigid airship, the successful private counterpart to the British government R101 project, in a competition intended to maximize innovation.

The R100 was built by the Airship Guarantee Co, a company created solely for the purpose, as a subsidiary of the armaments firm, Vickers. The managing director was Cdr Dennis Burney, and the design team was led by Barnes Wallis. The design team also included, as senior stress engineer, Nevil Norway.

Leading up to his innovative geodetic space frame fuselage design of the Wellesley, Wellington, and Windsor bombers, Barnes Wallis effectively created the frame of the airship from only 11 standardized components fitted into a non-rectilinear framework. All tubing used was of a special spiral-wound type of superior strength, and all wiring colour coded (a technique invented by Barnes Wallis and used for the first time on R80).

Wallis specified Otto-cycle (petrol) engines even though these were considered more of a fire risk; the competing R101 used heavier diesel engine designs.

1929 Constructed at the former RNAS Station at Howden in Yorkshire, the Vickers-built competitor flew to the Government airship establishment at Cardington, Bedfordshire on its maiden flight in the morning of 16 December 1929. At the huge (surviving) hangars at Cardington, two teams, the other led by the Air Ministry, competed to prove their impressive craft capable of flying from the UK to India.

The eventual goal was to offer a regular and comfortable trans-Atlantic service. Soon after 1920, Vickers' experts had calculated that the fare on an airship journey might be £45 in comparison with a contemporary airliner fare of £115 and that the non-stop range of an airship would be far superior, making the journey times by the alternative modes quite competitive.

1930 As part of its trials the R100 made a trans-Atlantic trip to Canada in July 1930 averaging 42 mph. The main Canadian mooring station was at the airport in Saint-Hubert, Quebec; it is estimated that one million people visited the airship there upon its arrival. The swifter return flight, in 58 rather than 78 hours, began on 13 August reaching Cardington on 16 August 1930. It could carry 100 passengers at 80 mph.

The ship had several flaws which would have been expensive to repair. One was the need to reinforce the outer covering which was damaged from flapping caused by the widely spaced frames so prominent in the design. Another was the problem with the tail design which was so aerodynamic that it created a strong vacuum that eventually destroyed the tail-cone of the ship prior to her Atlantic crossing. The R-100 represented the best that conventional airship technology in Britain, whereas the R-101 suffered in comparison because of its many groundbreaking, but ultimately problematic innovations. However, it should be noted that both ships were inferior to the Graf Zeppelin in lifting efficiency.

When the R101 crashed and burned, the Air Ministry ordered all R100 flights to be stopped. Three options were considered: a complete refit of R100 and continuation of tests for the eventual construction of R102; static testing of R100 and retention of about 300 staff to keep the programme 'ticking over'; or retention of staff and the scrapping of the airship. Eventually it was decided to sell the R100 for scrap in November 1931. The entire framework of the ship was flattened by machinery and sold for less than £600.