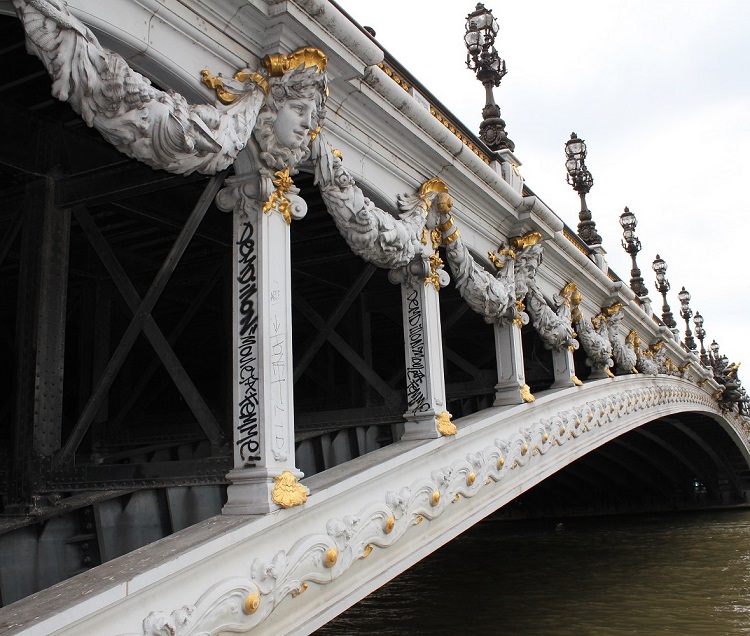 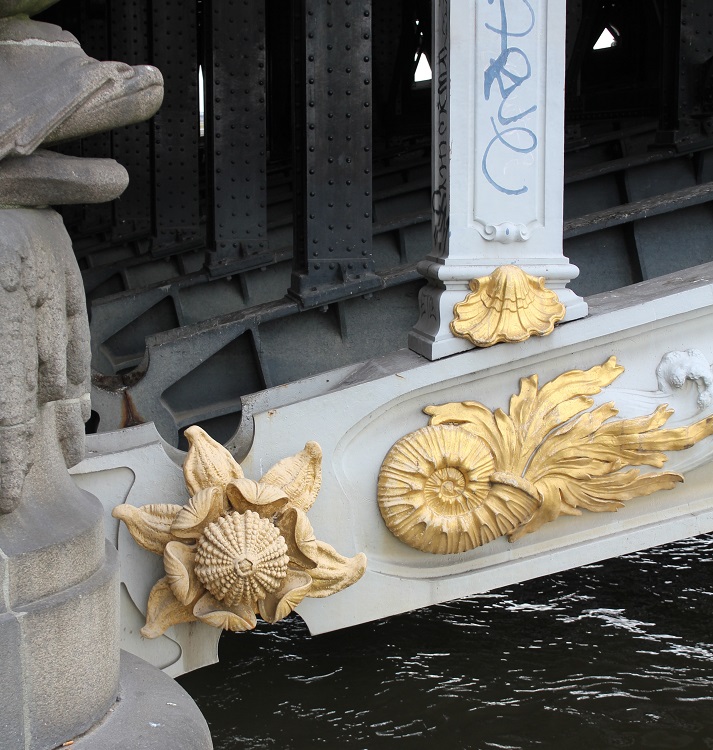 5. Inside of an outer arch rib

6. Inside of an outer arch rib

7. Outside of an outer arch rib 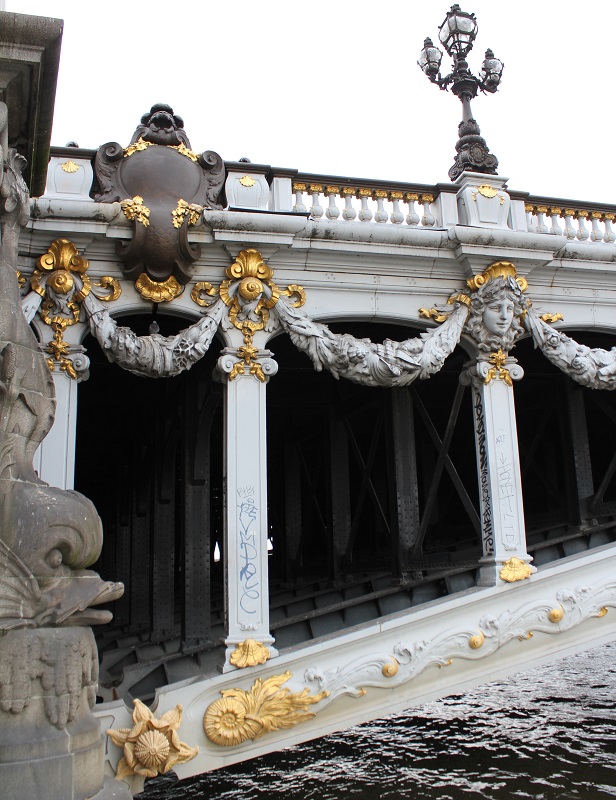 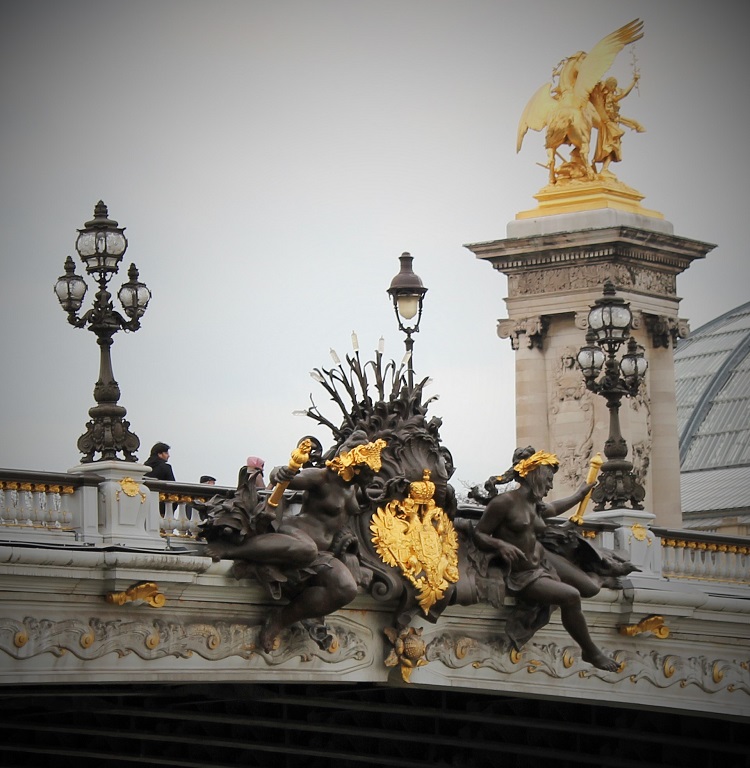 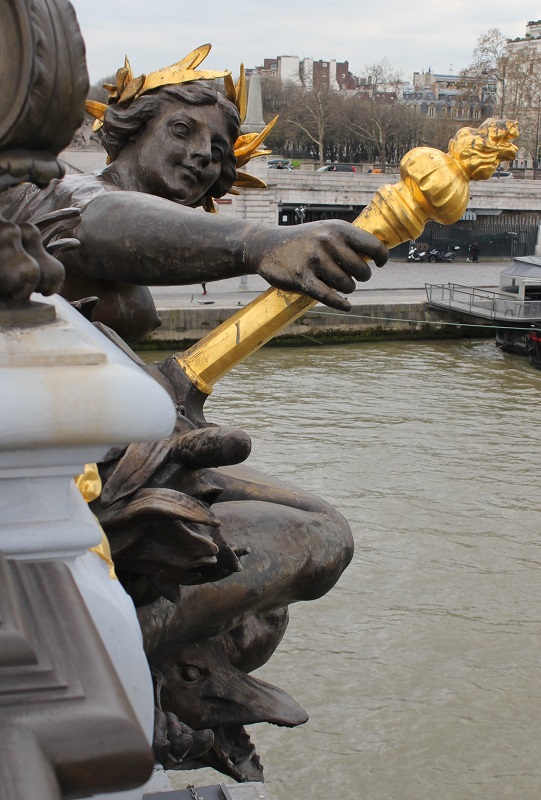 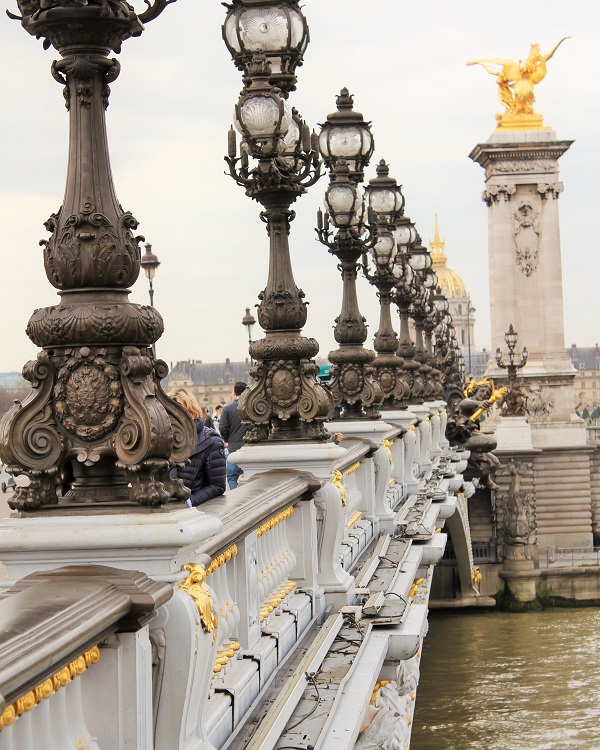 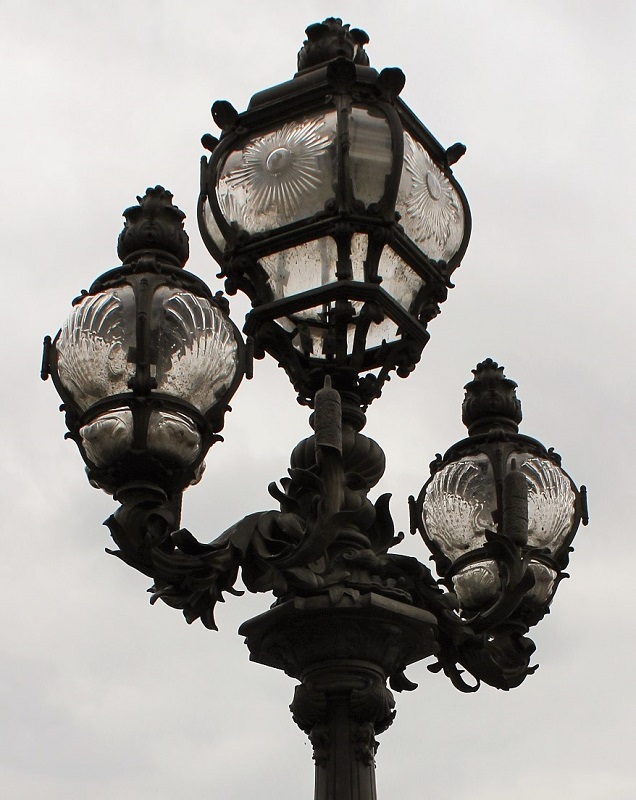 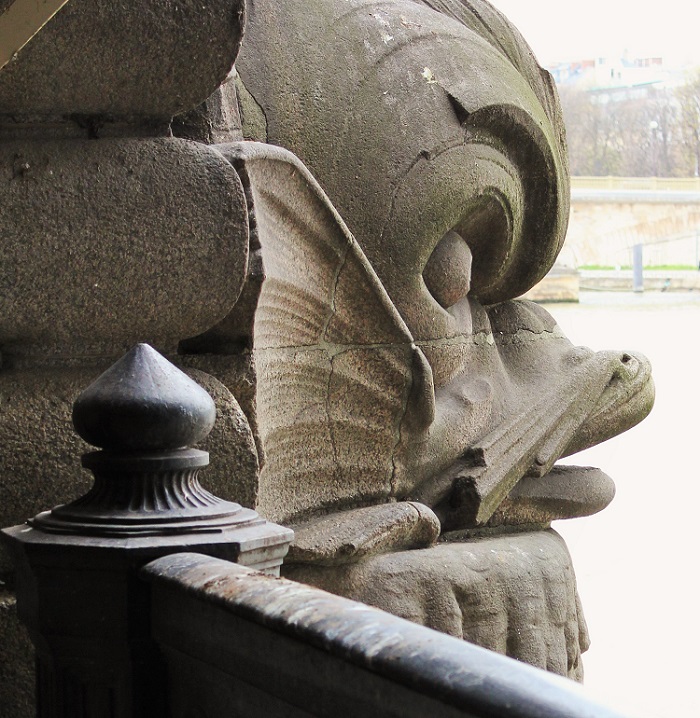 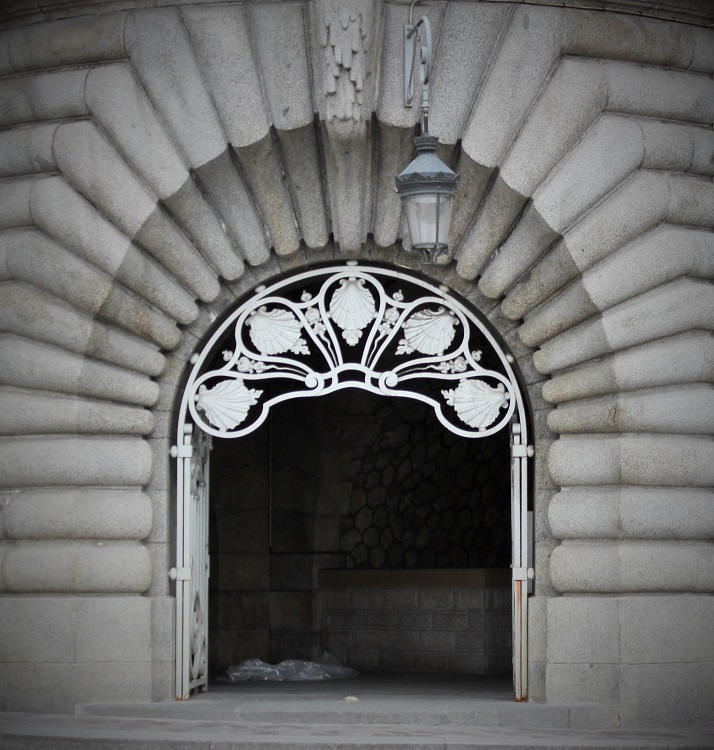 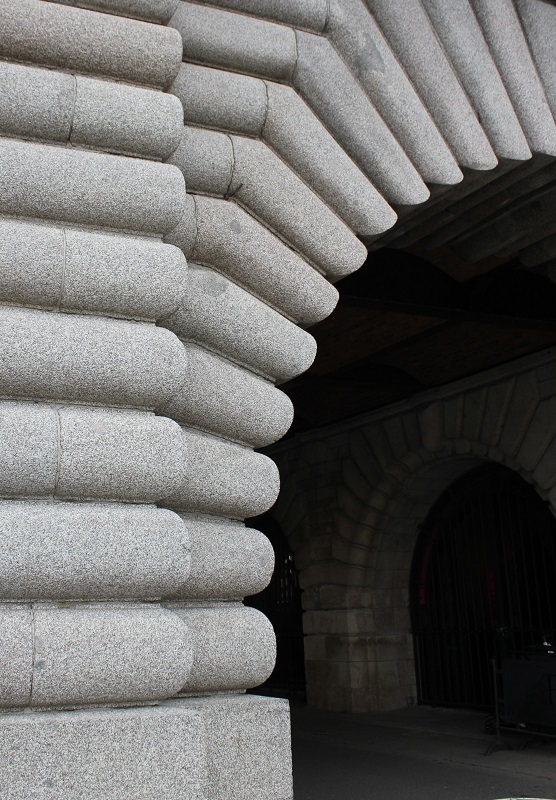 The Pont Alexandre III is an impressive three-hinge steel arch bridge crossing the River Seine in Paris. It connects the Champs-Élysées quarter with the area of the Invalides and Eiffel Tower. It was opened in 1900 for the Exposition Universelle, as were the nearby Grand Palais and Petit Palais.

The basic design was constrained by the need to avoid the bridge obscuring the view of the Champs-Élysées or the Invalides, while at the same time providing adequate clearance for boats using the Seine. Evidently there were no constraints on the weight or extravagance of the ornamentation. The swags (festoons) in particular are preposterous. The two columns at each end of the bridge, surmounted by gilded statues, do at least have the merit of highlighting the great width of the roadway (see photo 1).

Opinions on the decoration will vary according to taste, but there is no doubt about the quality of execution, which is excellent.

Considerable effort was made to hide the work of mechanical artisans, but behind the ornamentation we find examples of outstanding work by the structural designers and makers. The imposed design constraints demanded a very long span arch having a very low rise. The lack of intermediate piers would have been a bonus for boat crews.

The arch ribs are assembled from cast steel (acier moulé) voussoirs bolted together at their planed end faces. Steel is more difficult to cast satisfactorily than iron, but it is stronger, and the castings can be made thinner and lighter. The relatively thin section will be apparent from the photos, as will the good surface finish and the uniformity obtained. The individual castings are relatively small, at 3.4m (11.2 ft) long, but there are many. The majority of voussoirs are nominally of I-section, with the addition of stiffening webs, but for reasons of appearance the voussoirs of the outermost ribs have a semi-box section with a curved outer face (photos 5 & 6), to which are bolted decorative iron castings (photo 7). Considerable efforts have been made to give an appearance of continuity on the outer arches, i.e. to make the joints between the voussoir castings, and between the voussoirs and the decorative iron castings, as discrete as possible.

Each of the 15 arches has 32 cast steel voussoirs. These 480 castings were produced by Schneider at Le Creusot, shipped by barge, and placed by an overhead crane spanning the river.[1]

The structure above the arch ribs is comprised of riveted steel plates and sections. The superimposed decorative features are made from cast iron and bronze.

The low rise of the arches results in very large thrust forces being transmitted through pins to the abutments. The modest size of the pinned joints will be apparent from photo 4. Not so apparent is the massiveness of the abutments required to accommodate the forces. They are approximately 19m deep and extend 33.5m. back from the pinned joints.

The iron and steelwork for the bridge was produced by Schneider et Cie and the Cie de Fives-Lille.

The abutments required the construction of large steel caissons measuring approximately 44m by 33m, constructed by Daydé & Pillé for the masonry contractors, Letellier & Boutrinquin. They were described in 'Engineering' in 1897[2]. The lower portion of the caissons was of very rigid construction, to withstand the pressure of the air within. The upper portion provided steel walls to exclude the Seine from the area where the masonry was to be set.

Some details of the steel structure, from drawings produced for tendering purposes, were presented in 'Engineering' in 1897 [3]. The extreme flatness of the arches is clearly apparent from the elevation drawing (see illustration 23). The depth of the voussoirs increases slightly with distance from the abutments, and then decreases as the crown is approached. In fact the depth at the centre, just 0.95m (37.4"), was reduced from the original intent in order to provide increased headroom for boats.