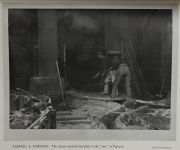 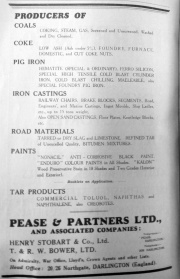 1882 Announcement that Joseph Pease and Partners, colliery owners, and J. W. Pease and Co, ironstone and mineral quarry owners, would be amalgamated as Pease Partners Ltd; the ownership would be divided between the existing owners[1]. The name adopted seems to have been Pease and Partners

1898 Public company registered on 11 October, to take over the collieries, ironstone mines and limestone quarries of Pease and Partners Ltd.

1898 Pease and Partners presented their engine Derwent to the North Eastern Railway. It was placed on a plinth at Darlington's Bank Top station and displayed there for many years[2].

1903 The collieries of the South Durham Coal Co were purchased. [4]

c.1905 Purchased Wilson, Pease and Co's interest (presumably in this company) from Barclay and Co[5]

1923 Pease and Partners purchased all of the Ordinary shares of William Whitwell and Co; arrangement made that Whitwells would purchase a considerable portion of their mineral supplies from Pease[7].

Pease and Partners, with its paid-up share capital of £2,795,976, and its debenture capital of £984,400 has many associated firms owning blast furnaces, foundries and mills, besides collieries in Durham.

1927 Sir Arthur F. Pease was Chairman and the Lord Gainford, another son of the Sir Joseph Pease, was Vice-Chairman. The most recent investment of the firm has been the Thorne Colliery. Pease and Partners had a controlling interest in several local companies or ironworks: the Skinningrove Iron Co, with its rolling-mills; the Lackenby Iron Co; the Normanby Iron Works; the Tees Iron Works; the Tees-bridge Iron Works; the Thornaby Ironworks; the North Bitchburn Coal Co; W. Stobart and Co and T. and R. W. Bower, a South Yorkshire firm; see Aberconway for further information.

1945 Preparations were being made for the nationalization of the company's coal mines[9].

1953 Closure of 3 subsidiaries - Henry Stobart and Co, East Hetton Collieries and Cottages Ltd[11]. 1954 The company only had 3 subsidiaries - the small paints company was closed; this left Tees Foundries and Deepwater Wharf Ltd; negotiations were continuing about compensation for the mines[12]

1957 The last remaining subsidiary, Tees Foundries, was absorbed into the parent company[13].

1958 Output of the foundries had been lower than previous year due to reduced demand by British Transport Commission[14].