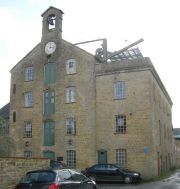 2018. View from road bridge over the River Parrett, showing the two culverts from the waterwheels 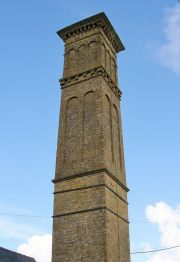 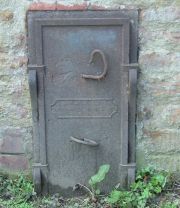 2018. Sibley cast iron soot door at base of chimney

Built by George Parsons in 1854 as a foundry, engineering works, flax mill, and rope works. The business became the West of England Engineering Co in 1865.

William Sparrow was manager at the works until 1868, when he left to establish the Somerset Wheel and Waggon Works, which became W. Sparrow and Co.

Parsons' business was liquidated in 1869. The textile business was taken on by George Hedgecombe Smith for making rope and similar products. The impressively long covered rope walk still exists, but is not accessible to the public.

William Sibley and Sons produced a wide range of products at the works from 1875 to 1928.

One of Sibley's employees, Benjamin Joseph Jacobs left in 1894 to join the Nautilus Stove Works in Yeovil, and later became chief engineer of Petters.

Much of the works survives in multiple occupation. Inside there are two waterwheels, one of which is just visible through dirty windows. One wheel, marked 'George Parsons West Lambrook 1854', is 16 ft diameter and 9 ft wide. The other is 12 ft diameter by 9 ft. The water was taken from the nearby River Parrett and returned to the river through a pair of culverts close to the works entrance.

The above information is from 'Somerset in the Age of Steam'.[1]

1871 'MARTOCK. Inquest. —On Thursday, 15th inst., an inquest was held at the Parrett Works, before Dr. Garland, deputy-coroner, touching the death of William Rowsell, aged 20, who met with his death at the Parrett Works on the previous Tuesday. John Vile said he was working with deceased, in a shed, on the 13th. He (witness) was turning off a wheel on a lathe, when one of the felloes flew off and struck the deceased (who was standing about six feet off) in the head, knocking him down. Witness went to his assistance, but he appeared to be nearly dead. He died about 10 o'clock the same night. Witness did not consider the accident was caused through any neglect. John Marshall gave corroborative evidence. The jury returned a verdict to the effect that deceased was accidentally struck by felloe flying off from lathe, causing fracture of the skull and other Injuries.'[2]