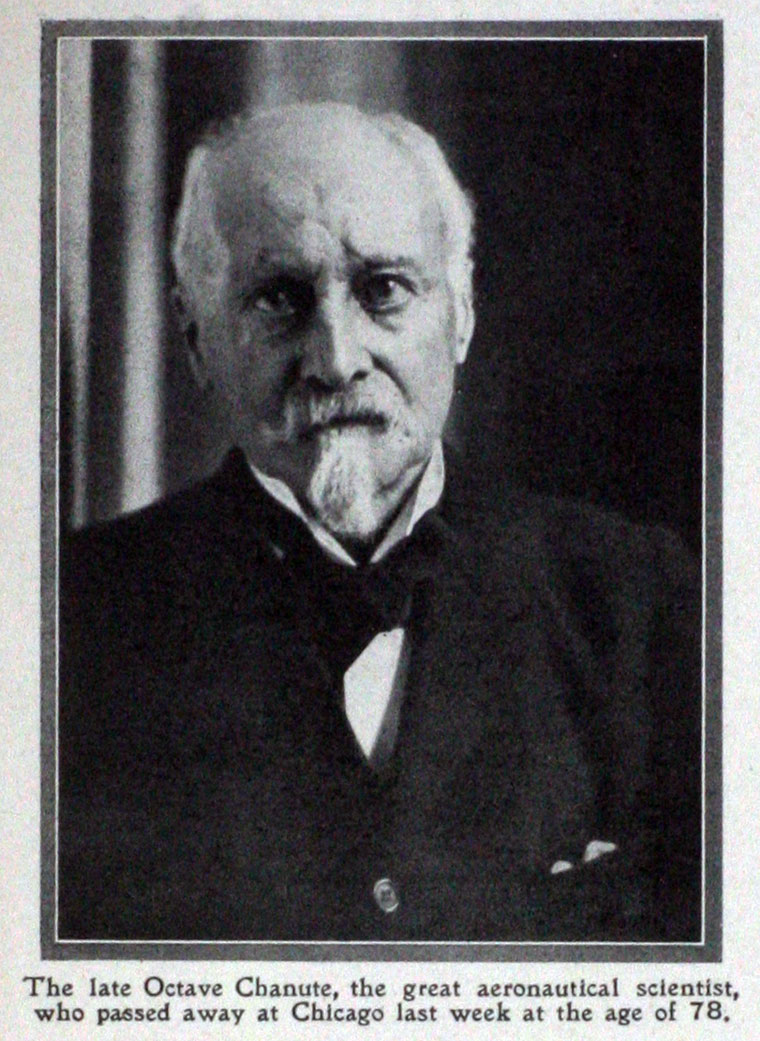 Octave Chanute (18 February 1832 - November 23, 1910) was a French-born American railroad engineer and aviation pioneer. He provided the Wright brothers with help and advice, and helped to publicise their flying experiments.

Chanute first became interested in aviation during a visit to Europe in 1875. When he retired from his engineering business in 1889, he decided to devote his time to furthering the new science of aviation.

Following his systematic engineering background, Chanute first collected all the data that he could find from flight experimenters around the world. He published this as a series of articles first published in The Railroad and Engineering Journal from 1891 to 1893, and collected together in Progress in Flying Machine in 1894. This was the first organised, written collection of aviation research.

1882 Designed the original Kinzua Viaduct for the Erie Railway.[1]

Chanute freely shared his knowledge about aviation with anyone who was interested and expected others to do the same. This led to friction with the Wright brothers, who wanted to protect their invention with patents. The friendship was still impaired when Chanute died in 1910, although Wilbur Wright delivered the eulogy at Chanute's funeral.

OCTAVE CHANUTE, born in Paris on the 18th February, 1832, died at Chicago on the 23rd November, 1910. As an engineer he had a distinguished career.

Brought to America as a child, he was educated in New York, and began engineering work on the Hudson River Railway, becoming Division Engineer at Albany at the age of 21. Subsequently he constructed various railway lines in Illinois, and in 1863 he was appointed Chief Engineer of the Chicago and Alton Railway, in that capacity designing and building the Union Stockyard in Chicago.

In 1867 he built the Kansas City bridge across the Missouri River, and on its completion undertook the construction of railways in Kansas.

In 1873 he accepted the position of Chief Engineer of the Erie Railway, and held this office for 10 years, during which time the system was extended, many tracks doubled, and the great Kinzua viaduct erected under his direction. He also acted as Consulting Engineer for the Sibley and Fort Madison bridges on the Atchison, Topeka and Santa Fe Railway.

In 1883 Mr. Chanute established a consulting practice at Chicago, and interested himself especially in the subject of timber preservation. He was Chairman of the committee appointed by the American Society of Civil Engineers to investigate this subject, and in 1885, he organized the Chicago Tie Preserving Company for the preservation of railway ties and other timber on a commercial scale. The firm, which is now conducted under the style of O. Chanute and Company, also carried on much experimental and investigation work, Mr. Chanute being recognized as a leading expert on the subject.

Mr. Chanute will perhaps be chiefly remembered for his connection with the science of aviation. He first took up the subject in 1874, and later, in 1888, he carried out a number of gliding experiments with aeroplanes, which he considered the type best suited for practical development. The aeroplanes were of his own design, and besides giving practical assistance to the Wright brothers and other experimenters, he published the results of many notable experiments which he had carried out personally.

The proposition-paper on which he was elected an Honorary Member of this Institution recited that " as former Chief Engineer of the Erie Railway; as President of the American Society of Civil Engineers, and as Engineer of many important works, Mr. Chanute has held a prominent position amongst American Engineers for the past 30 years ; and as Representative of the latter, on the occasion of the great Engineering Congress at Chicago, 1893, he presided at the Inaugural Meeting, and delivered the Address of welcome on the part of his countrymen to the Delegates of The Institution of Civil Engineers, and of the corresponding scientific bodies throughout the world, who had been officially invited to the Congress.

He was a member of various American and European engineering and aeronautica1 societies, and in 1910 was made an Honorary Member of the Aeronautical Society of Great Britain, and was the recipient of its gold medal in recognition of his distinguished services to aviation. In 1857 he married Miss Annie James, of Peoria, Illinois, who died in 1902, and leaves one son and three daughters living.

Mr. Chanute was elected an Honorary Member of The Institution on the 21st of May, 1895.