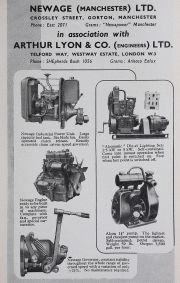 Subsequently the initials were used to form a shorter name, Newage Engineers

1966 P. R. Motors was acquired by the Charterhouse Group through its subsidiary, Newage Engineers Ltd.

Manufacturers of alternators and electrical equipment; marine and industrial engine converters. Owned a main dealer for Ford, H. E. Nunn in Salford and parts of Manchester, and Newage-Lyon of Stamford, maker of electric generators[3]

1974 Transmissions Division continued to prosper; to cater for the increased demand for its existing products and its projected expansion into related transmissions products, a new factory was purpose-built at Barlow Road.

The company built a very close partnership with its customer base which led to the company being the preferred source of drive axles and gearboxes for the British dumper industry. As well as other vehicles produced in the U.K., France, Germany, Switzerland, Austria and other countries. This has resulted in a steady stream of new and improved transmissions, both standard products such as 40M and 85M gearboxes, as well as dedicated products to meet specific customer requirements.

This close relationship with the dumper industry led Newage to acquire Gear Drive Systems in 1975 and develop a full range of double reduction axles with totally enclosed oil immersed brakes specifically for their needs, although the range was later broadened to general off-highway applications. The same criteria for reliability for which the company's gearboxes are so well known was applied to the range of axles.

1980 The Electrical Division won the Queen's Award for Export[6]

1980 The divisional structure was disbanded - P. R. Motors re-acquired the business of the Transmissions Division and was renamed Newage Transmissions Limited. The Electrical Division continued to be known as Newage Engineers.