Grace's Guide is the leading source of historical information on industry and manufacturing in Britain. This web publication contains 143,744 pages of information and 230,103 images on early companies, their products and the people who designed and built them.

James Nasmyth's sketch of the works. 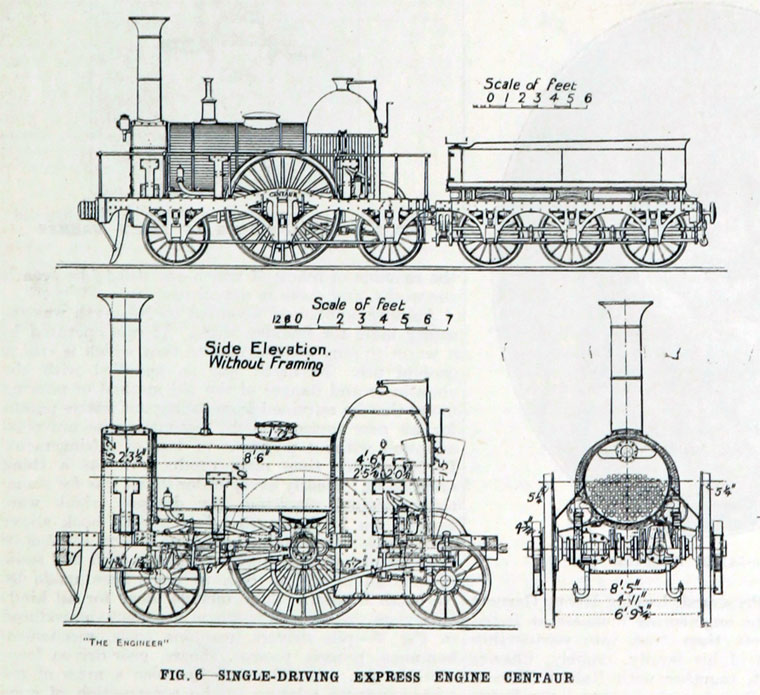 The company was a Locomotive manufacturer near the town of Eccles. The works was located adjacent to both the Liverpool and Manchester Railway and the Bridgewater Canal, and could export locomotives after, May 1894, via the Manchester Ship Canal.

1836 The Bridgewater Foundry was founded by James Nasmyth, famous for the "Nasmyth Hammer," and his brother George Nasmyth, in partnership with Holbrook Gaskell. James Nasmyth had previously been employed in Henry Maudslay's workshop in Lambeth and his interest was mainly, but not limited to, specialist machine tools.

Nasmyth and Gaskell supplied machinery to Pilkingtons of St Helens, where Deacon moved after completing his apprenticeship in the early 1840s.

1841 The Birmingham and Gloucester Railway had found some American Norris 4-2-0 locomotives very successful, especially on the notorious Lickey Incline, and so the company built six similar ones for the line.

1843 The steam hammer was adapted to become self-acting. [3]

1848 A circular saw for cutting iron bars, driven by a reaction steam turbine, was described and illustrated in The Practical Machinist's Journal [4]. The saw was approx 3 ft 8" dia, and the turbine wheel approx 2 ft 3" dia. 2000 rpm & 60 psi.

1853 They were described as makers of locomotive engines

From about 1873, the demand for locomotives from overseas increased and up to 1938, over 1,650 locomotives were produced; over one thousand of which were exported. One buyer was the New Zealand Railways Department, and a misunderstanding with the firm regarding the weight limitations imposed on the NZR P class that delayed the delivery of the urgently needed locomotives precipitated a shift in New Zealand away from English manufacturers.

WWI During World War I the factory was mainly engaged in munitions work; but it built twenty 2-8-0 locomotives for the Chemin de Fer de l'État in France and thirty two for India along with a hundred small petrol driven locomotives.

1916 The steam hammer 'Thor', erected for forging guns, was eventually replaced with a more modern version. [8]

1920 History of the company in The Engineer

James Nasmyth and the Bridgewater Foundry

An excellent account of the work of James Nasmyth, and of the Bridgewater Foundry under Nasmyth, was written by J. A. Cantrell and published in 1985 [9]. This is a thorough, scholarly work, with numerous references and footnotes, and provides a valuable source of information on the day-to-day working of the business. It critically examines some of the important claims and omissions in Nasmyth's autobiography. A significant omission by Nasmyth in his autobiography is any credit to his brother George Nasmyth, for the part he played in establishing the business.

'BOILER EXPLOSION AT PATRICROFT. A boiler explosion, attended with fatal results, took place on Saturday, at the works of Messrs. Nasmyth end Gaskell, called the Bridgewater Foundry, at Patricroft, and near to the Liverpool and Manchester Railway. The explosion took place at the dinner hour, on Saturday, about five minutes before one o'clock. Had all the hands been at work (420) there would have been at least forty within the range of the explosion and its destructive effects. We regret to state that one man, the engineer, named John Rogers, was killed by the accident, and that four others were badly hurt....'.

The displaced boiler brought down '.....two chimneys, and the brass foundry. It then want broadside along, carrying before it and along with it an experimental steam hammer and anvil, which together weighed about three tons, and stood about eight feet west of the boiler, and forcing them into the canal, a distance of forty-three yards!'....'

The first man found in the ruins was Joseph Blears, who was said to be in considerable danger. A dresser [fettler] named Henry Davis was struck by a large piece of casting and later died from his injuries. Other injured workers were named as Stephen Barr and Thomas Hurst.

'It appears that the deceased, who had been in the employ of Messrs. Nasmyth and Gaskell since the commencement of the establishment - a period of between eight and nine years - and was an exceedingly sober, careful, and steady workman, was the sole engineman, and had no fireman under him. About half-past nine o’clock on Saturday morning, he had some words with a lad in the employ of the firm, who, in anger, threw a large coal at him. It struck Rogers on the head, knocked him down, and hurt him severely. He complained shortly afterwards to Mr. Torry, the head foreman, and the boy was forthwith discharged, perhaps an hour or two before the accident. About a quarter before one o'clock, Thomas Gatley, a joiner in the establishment, went into the engine-house and found Rogers smoking his pipe. He told Gatley that his head felt very ill from the effects of the blow he had received on it, and said he thought a bit of 'bacco would do him good. ….. Rogers sat down on a step on the iron staircase, still complaining of his head, and Gatley left him there only five or six minutes before the explosion. It would seem, that, the effects of the blow on the head had been to casue some mental confusion, labouring under which, it is supposed that the poor man had either neglected to keep a proper supply of water in the boiler, or had in some way neglected his duty, so as to cause the fatal catastrophe. The deceased, who was upwards of 50 years of age, was a native of Northampton, but he came to Patricroft eleven or twelve years ago….'

The inquest into the death of Rogers was held at the Wellington Inn, Eccles, before Mr. Rutter, coroner. The jury viewed the body at Rogers house in Vine Street, Eccles. Witnesses included Samuel Brabner (fitter), John Hepworth (boiler making foreman), and Archibald Torry (Head Foreman). Mr Gaskell said that '...in his opinion the explosion had been caused by over-pressure of steam, produced by the water having been allowed to get too low in the boiler; in which case the boiler flue would become overheated, and, when the engine was started at one o'clock, fresh water would be thrown into the boiler, and a tremendously rapid generation of steam would ensue, which would cause instantaneous explosion..... Verdict: Accidental death.' [10]