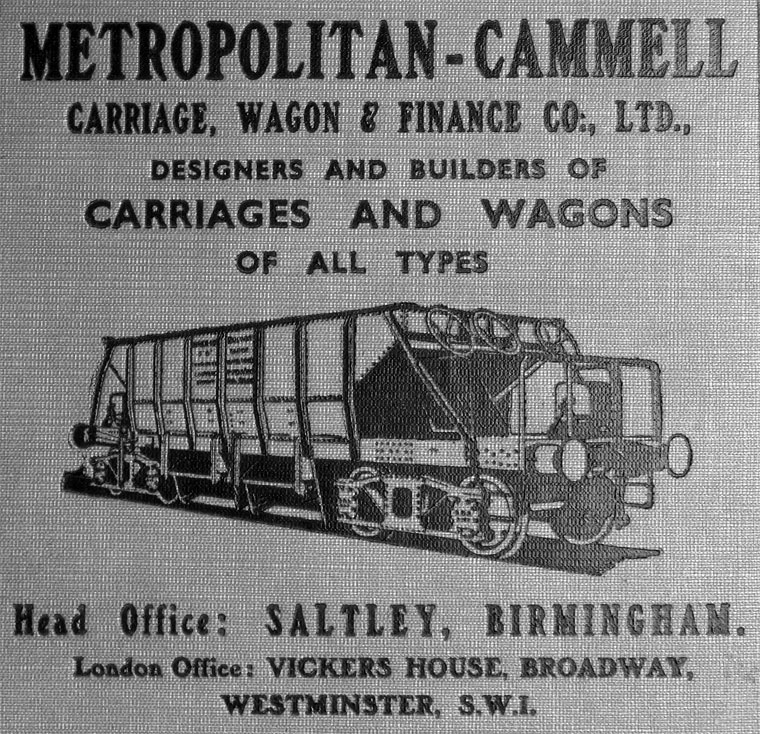 The Metropolitan Cammell Carriage Wagon and Finance Co (MCCW) was a Birmingham based manufacturer of railway carriages and wagons, based in Saltley and subsequently Washwood Heath.

1928 A merger of companies in the railway carriage and wagon industry was announced, involving parts of Vickers and Cammell, Laird and Co[1].

It has made trains for railways in the UK and overseas, including the Mass Transit Railway of Hong Kong, Kowloon-Canton Railway (now KCR East Rail), the Channel Tunnel and locomotives for Malaysia's Keretapi Tanah Melayu. Diesel and electric locomotives were manufactured for South African Railways, Nyasaland Railways, Malawi, Nigeria, Trans-Zambezi Railway and Pakistan; DMUs for Jamaica Railway Corporation; and EMUs for Mexican National Railways.

The vast majority of the current and past London Underground rolling stock in mid 20th century was made by the company. The company designed and built the renowned Blue Pullman for British Railways.

1934 Private company. Capital reorganisation; the company would be called Metropolitan-Cammell Carriage and Wagon Co Ltd; the shareholders would continue to be Vickers Ltd and Cammell Laird and Co[4]