Grace's Guide is the leading source of historical information on industry and manufacturing in Britain. This web publication contains 149,713 pages of information and 235,473 images on early companies, their products and the people who designed and built them. 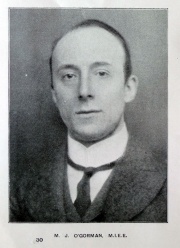 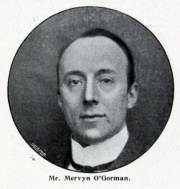 Lieut.-Colonel Mervyn Joseph Pius O'Gorman (1871-1958) was one of the greatest British aeronautical designers. During World War I he was an aeronautical research designer at the Royal Aircraft Factory in Farnborough, testing out new inventions in the field.

Born in Ireland, Mervyn O'Gorman (or 'O.G.' as he was affectionately known) is best known as one of the greatest British aeronautical engineers.

1904 He was also a motoring pioneer, writing O'Gorman's Motoring Pocket Book in 1904, and was actively involved in the Royal Automobile Club (RAC), becoming its vice-president. He also later played a key role in the introduction of the Highway Code.

1904 O'GORMAN, Mervyn, 82, Victoria Street, London, S.W. Cars: Oldsmobile, 5-h.p. electric victoria (Still system). Total distance travelled since becoming a motorist. About 15,000 miles. Hobbies: Touring with camera, sketching, shooting. Principal aim in furthering automobilism: To promote the use by municipalities and others of motor-cars instead of trams; to open up poor districts and the colonies by good roads and cars, instead of delaying development until the remote time when the heavy Standing charges of a railway could he met. Club: Burlington Fine Arts. [1]

During the First World War he was head of the Royal Aircraft Establishment at Farnborough. At the Royal Aircraft Factory under the direction of the Superintendent, Mervyn O’Gorman, a series of type classifications was laid down for pursuing aircraft research.

Gorman is now regarded as the founder of Britain’s scientific approach to aeronautics which, before, had been largely hit and miss.

O'Gorman was an artist as well as an engineer, concentrating on etching and lacquer-work. Although not a member of the RPS, he was also a talented photographer. A charming and humorous man with enormous physical and mental energy, he seems to have been almost universally liked and admired.

His obituary in The Times summed him up as 'A man of agile mind and Hibernian eloquence.'

O'GORMAN, M., M.I.E.E.- Born in 1870, and educated at the University College, Dublin. Mr. Mervyn O'Gorman is a consulting engineer, a Fellow of the Physical Society, and has served actively on several Committees of the Institution of Electrical Engineers, before which he read the Premium Paper in 1901; also a member of the Burlington Fine Arts Club. He is a keen traveller, and finds that motoring adds a new zest to the use of the camera. In 1900 he joined the A.C.G.B.I., and has taken great interest in Club affairs, attending most of the Club Trials and those of the Liverpool S.P.T.A. He acquired, one after another, six motor bicycles, beginning with one of the early Minerva machines. An electrical car on the "Still" principle was ordered from Messrs. Morgan and Co. in 1901, and recently an Oldsmobile, on which some 4000 miles have been covered.

He was educated at Downside, and at University College, Dublin, where he took degrees in Classics and Science. He studied electrical engineering at the City and Guilds Institute for two years, and began his career with Fowler Waring Cables Co. Later he became Manager of Cie Cenntrale des Cables Electriques in Paris, and then was appointed Consultant Engineer to Glover and Co. (Cables).

Previous to 1909, when he became Superintendent of H.M. Royal Aircraft Factory at Farnborough, he was in partnership with Cozens-Hardy, and then with Swinburne and Baillie.

During his service as Superintendent he reported on European Aeronautics with Admiral Sir M. Sucter in 1912. In 1917 he was sent to report on the Italian Front with Air Commodore Babington. From 1916-1919 he was Consulting Engineer to the Director-General of Military Aeronautics; 1919-1929 he was President of the Technical Commission of the Federation Aeronautique Internationale, Chairman of the Accident Investigation and Civil Air Transport Committees of the Air Ministry, Chairman of the Adhesives Committee of the Department of Scientific and Industrial Research; 1923-1931, Vice-chairman of the Royal Automobile Club, and in 1952 he became Vice-President; 1931, Chairman of the League of Nations Sub-Committee on Rating Aeronautical Engines; 1910-1937, Vice-President of the Association Internationale des Automobiles Club Reconnus, and also of the Federation Internationale Aeronautique, Paris; 1928, Vice-chairman Royal Aero Club, and in 1934, Vice-Resident.

A founder member of the Royal Flying Corps he was a pioneer of aeronautical engineering and published several articles on the subject. He also published O'Gorman’s Motor Pocket Book in 1908.