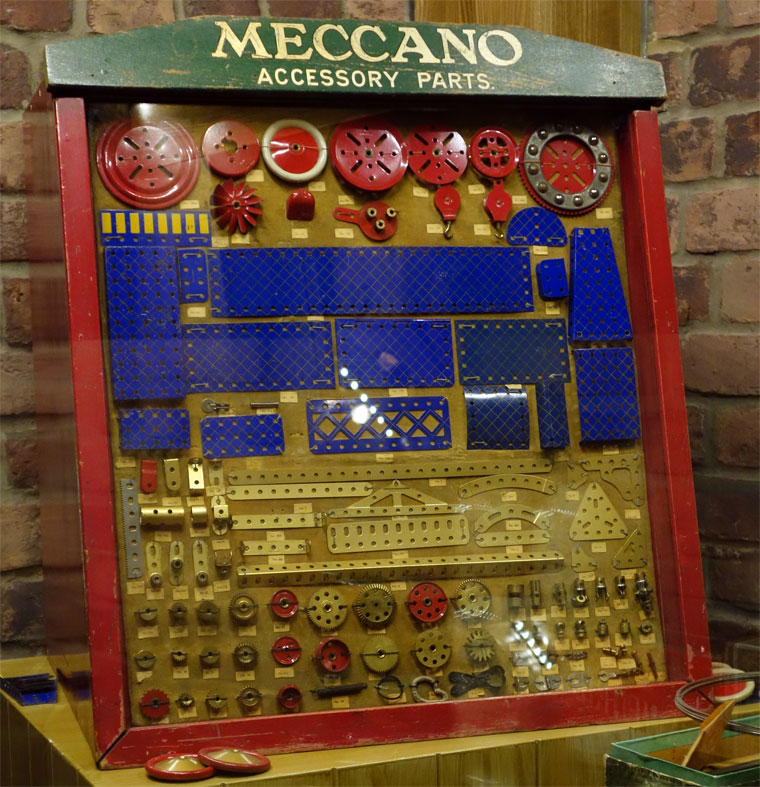 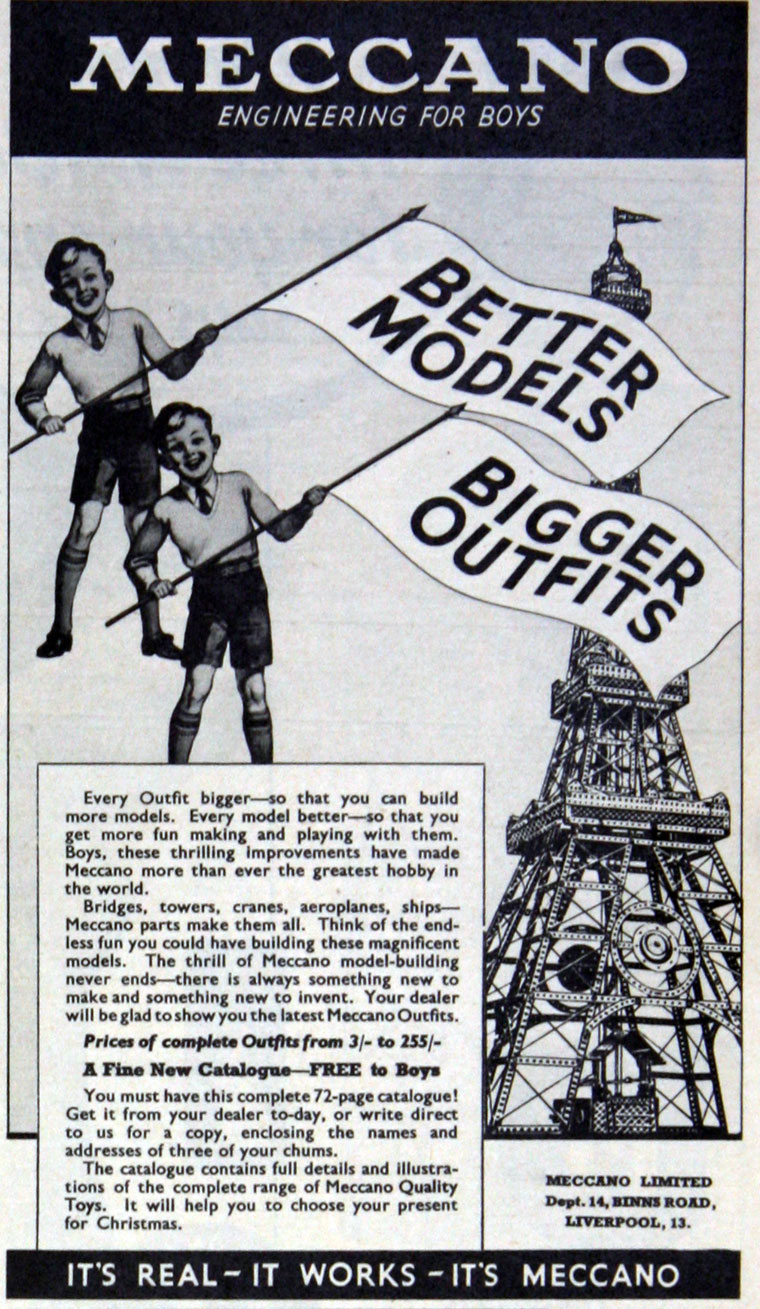 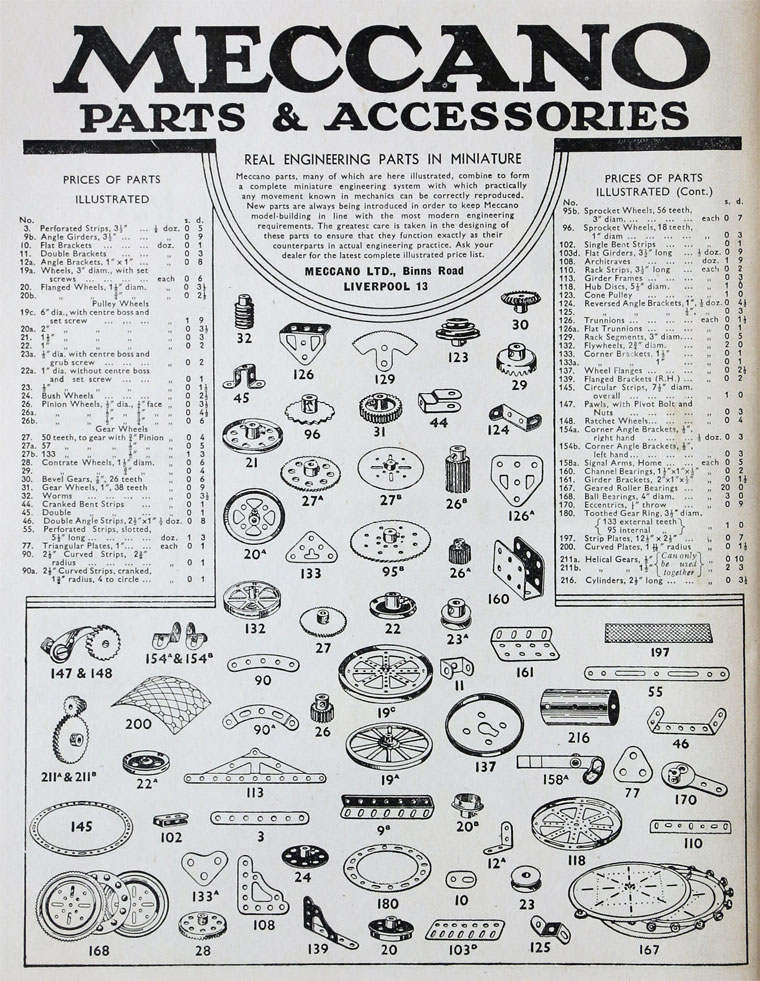 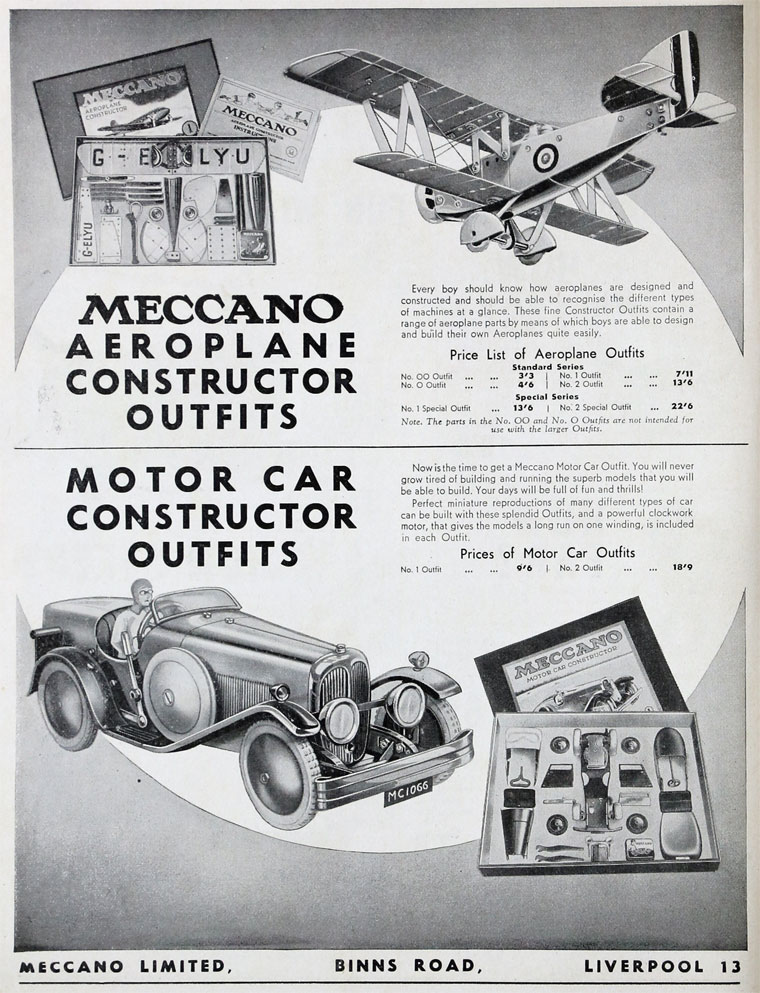 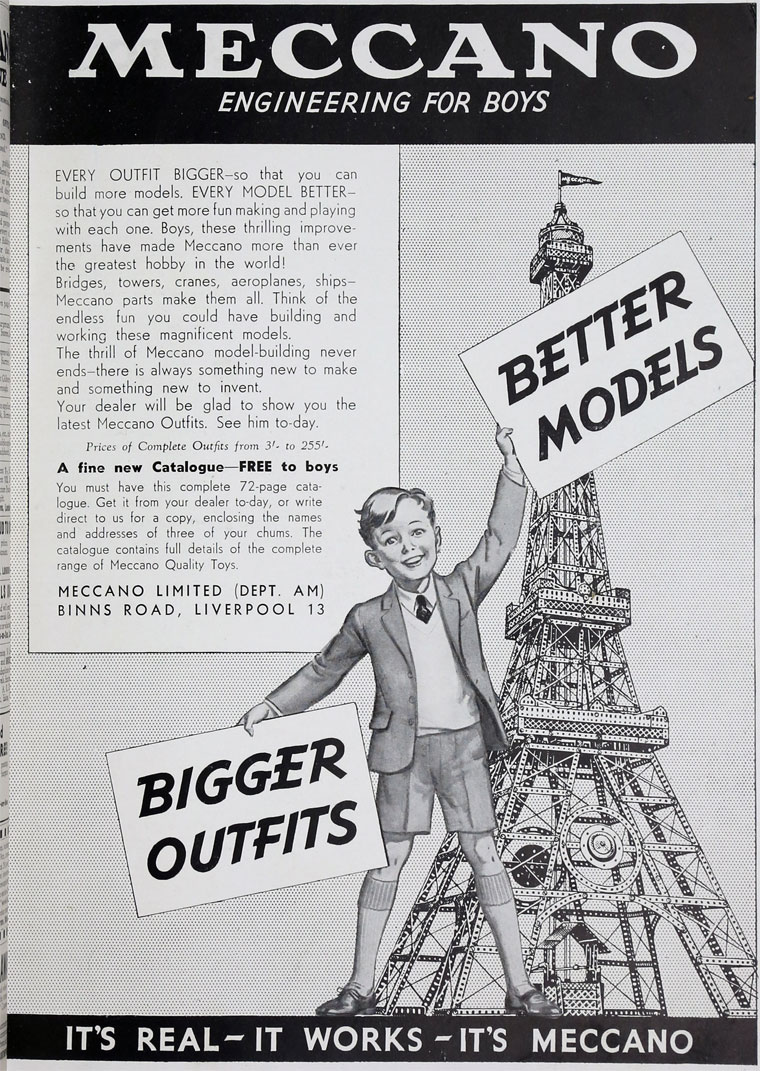 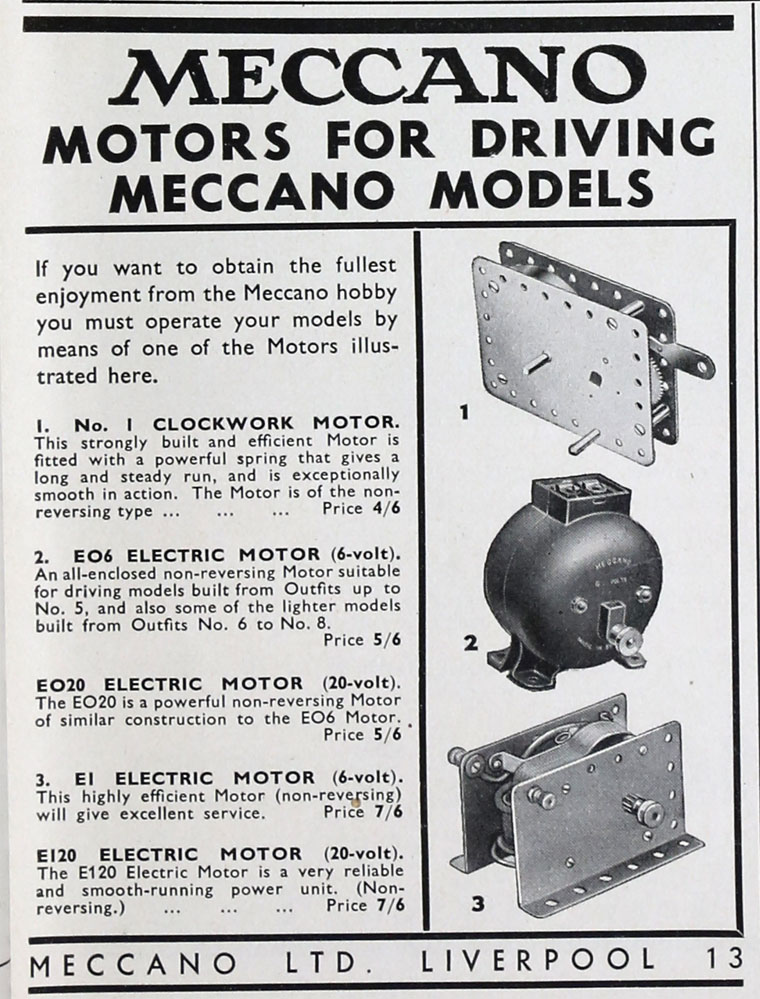 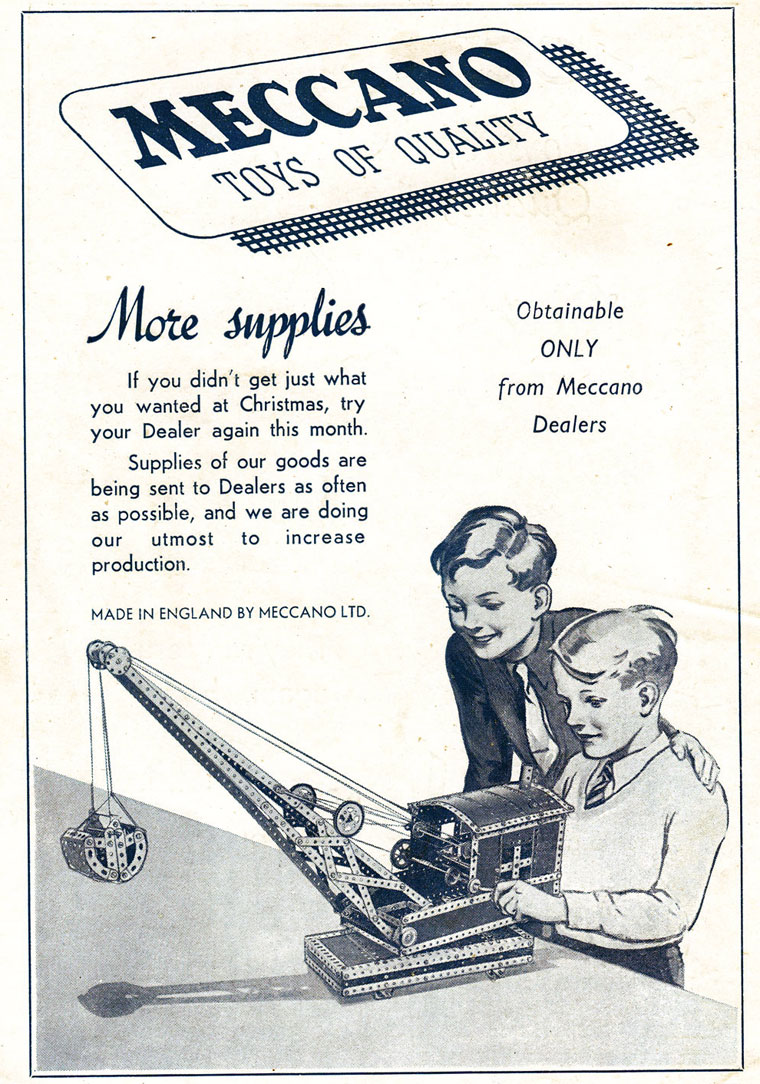 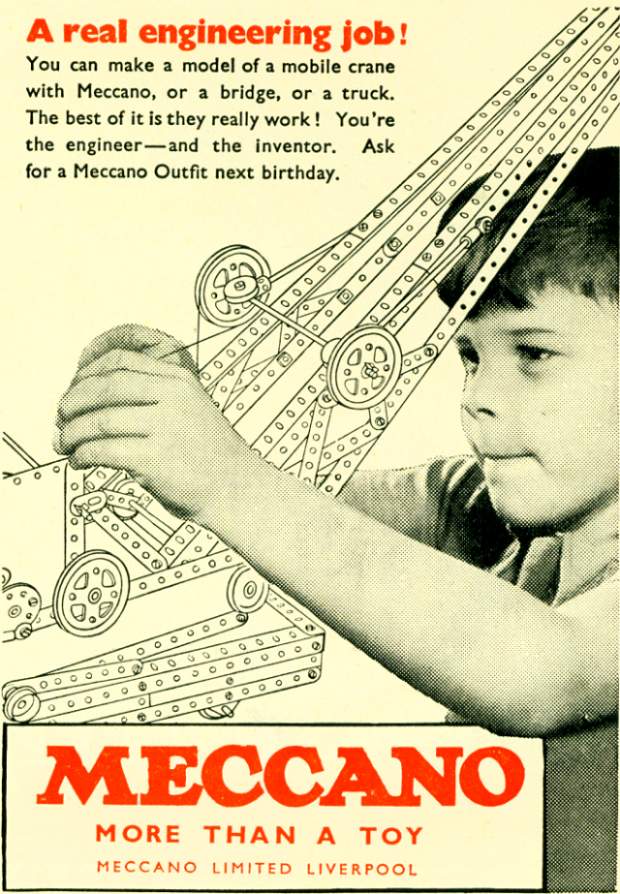 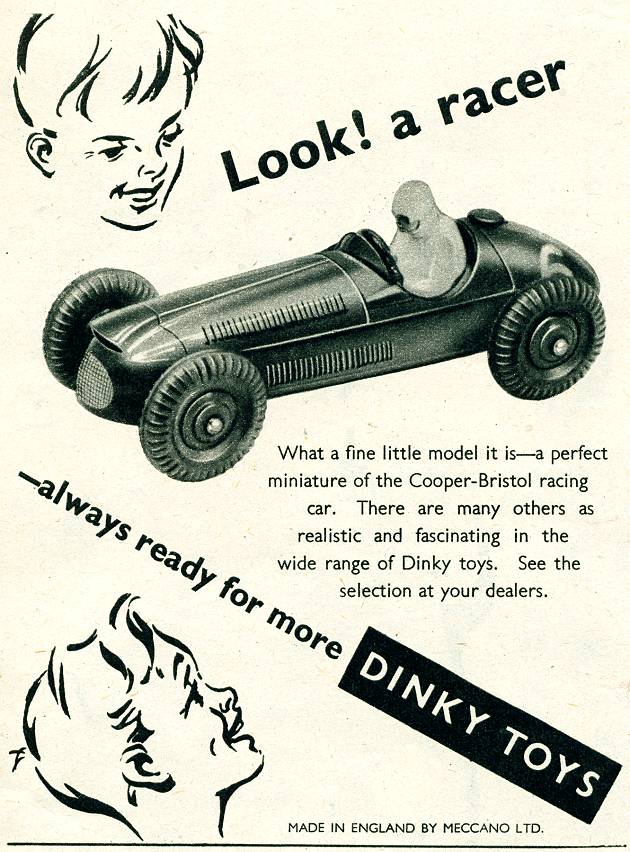 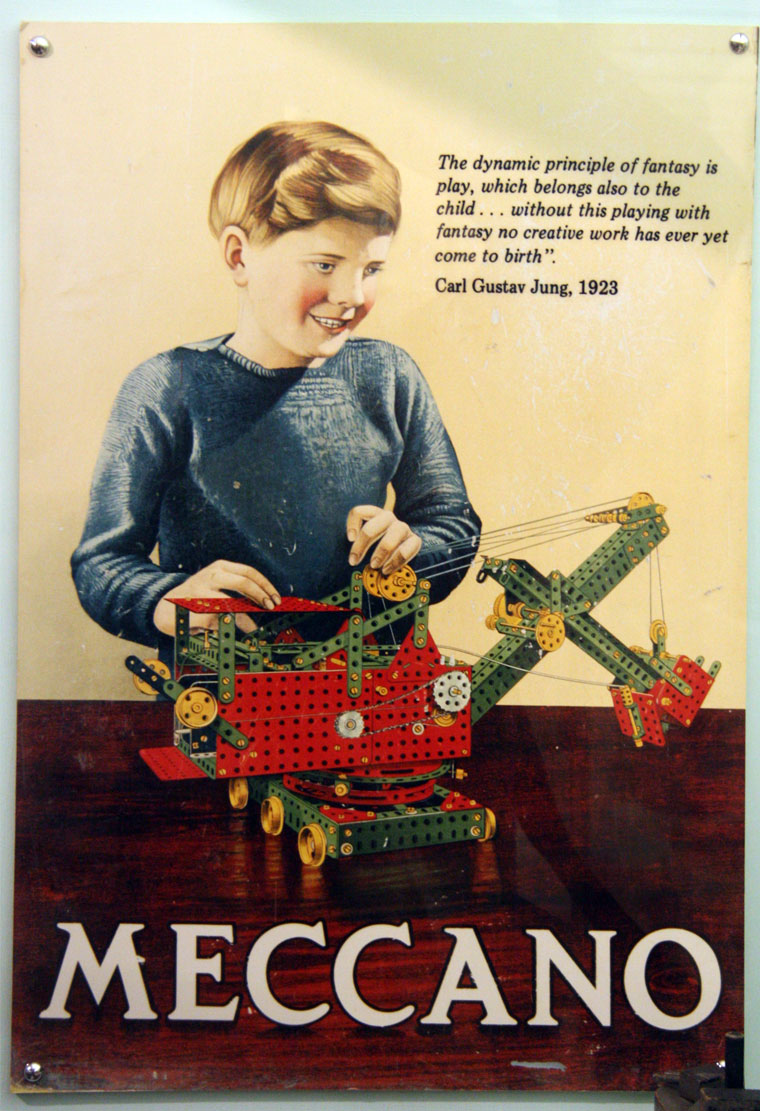 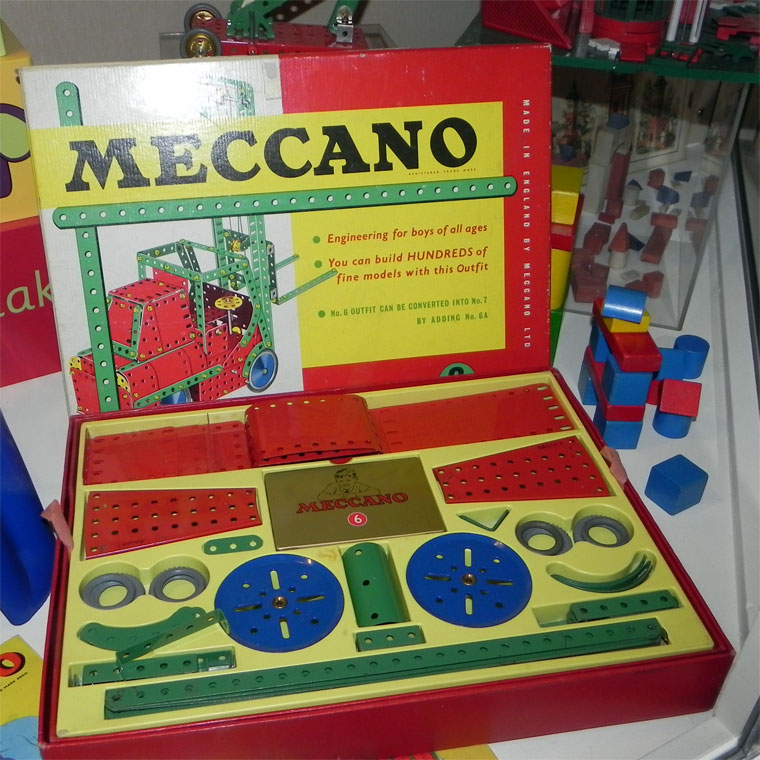 1901 Frank Hornby, a clerk from Liverpool, England, invented and patented a new toy called "Mechanics Made Easy" that was based on the principles of mechanical engineering. It was a model construction kit consisting of perforated metal strips, plates and girders, with wheels, pulleys, gears and axles for mechanisms and motion, and nuts and bolts to connect the pieces. The perforations were at a standard ½ inch (12.7 mm) spacing, the axles were 8-gauge, and the nuts and bolts used 5/32 inch BSW threads. The only tools required to assemble models were a screwdriver and spanners (wrenches). It was more than just a toy - it was educational - teaching basic mechanical principles like levers and gearing.

The parts for Hornby's new construction kit were initially supplied by outside manufacturers, but as demand began to exceed supply, Hornby setup his own factory in Duke Street, Liverpool. As the construction kits gained in popularity they soon became known as Meccano and went on sale across the world. In September 1907, Hornby registered the Meccano trade mark.

1907 The first construction sets had parts that were rather crudely made: the metal strips and plates had a tinplate finish, were not rounded at the ends and were not very sturdy. But manufacturing methods were improving all the time and by 1907 the quality and appearance had improved considerably: the metal strips were now made of thicker steel with rounded ends and were nickel-plated, while the wheels and gears were machined from brass.

In order to raise more capital to invest in a larger factory and plant, a company had to be created.

1908 May 30th. Formation of Meccano Ltd. Elliot had decided not to join the new company, leaving Hornby as the sole proprietor. The Meccano factory was relocated to West Derby Road in Liverpool

1910 The famous "MECCANO" logo was commissioned. Meccano Ltd's turnover for the 1910 financial year was 12,000 pounds. The first sets under the new Meccano name were numbered 1 to 6.

1912 Meccano was exported to many countries; Frank Hornby and his son, Roland, formed Meccano (France) Ltd in Paris to manufacture Meccano. An office was also opened in Berlin, Germany and Märklin began to manufacture Meccano under licence. Hornby also started importing clockwork motors from Märklin.

1914 To keep pace with demand, a new Meccano factory was built in Binns Road, Liverpool, which became Meccano Ltd's headquarters for the next 60 years. Hornby also established Meccano factories in France, Spain and Argentina. The word "Meccano" was thought to have been derived from the phrase "Make and Know".

1922 The No. 7 Meccano Outfit was introduced, which was the largest set of its day, and the most sought after because of its model building capabilities and prestige.

1926 To mark the 25th anniversary of his patent, Hornby introduced "Meccano in Colours" with the familiar red and green coloured Meccano pieces. Initially plates were a light red and items like the braced girders were a pea-green. However, the following year strips and girders were painted dark green, the plates Burgundy red, while the wheels and gears remained brass.

1933 Introduced the Dinky range of models which grew to include miniature cars, lorries, trucks, motorcycles, farm machinery, rural animals, and other models.

1934 The Meccano pieces changed colour again: the strips and girders became gold while the plates were changed to blue with gold criss-cross lines on them. This new colour scheme was only available in Great Britain until the end of the Second World War, in 1945. The old red and green sets were still produced for the export market and were re-introduced in Great Britain after the war. The nine basic Meccano outfits (numbered 00 to 7) were replaced by eleven outfits, labelled 0, A to H, K and L, the old No. 7 Outfit becoming the L Outfit. This L Outfit is often regarded as the best of the largest Meccano outfits. (See Note below)

1937 The alphabetical outfit series was replaced by a numeric series, 0 to 10, the L Outfit being replaced by the smaller No. 10 Outfit. Although reduced in size from the L Outfit, the No. 10 Outfit became Meccano's flagship set and remained relatively unchanged until it was discontinued a half-century later in 1992. Accessory sets were retained, numbered 1A to 9A, that converted a set to the next in the series (for example, accessory set 6A would convert a No. 6 set to a No. 7 set). As had been the case from early days, Meccano Ltd would also supply individual Meccano parts to complement existing sets.

World War II interrupted the production of Meccano in England when the Binns Road factory converted to manufacturing for the war effort.

1950 The Korean War also disrupted production due to a metal shortage and it was not until the mid-1950s that Meccano production returned to normal with new parts being added to all the sets. (See Note below)

1964 Meccano was purchased by Lines Brothers Ltd. In an attempt to redefine Meccano's image, the colour scheme was changed again, this time to yellow and black plates, with silver strips and girders. The colours of yellow and black were chosen because they were the colours typically used by most large construction vehicles of the day. The combined model railway product was marketed as Tri-ang-Hornby although the vast majority of the models were all Tri-ang. The Hornby name being more established and recognised (despite the company's failure), so the Tri-ang part was dropped and the product was sold as Hornby Railways.

1967 The silver colour was replaced by zinc when it was found that the silver pieces marked easily.

1970 Electronic parts were introduced for the first time and the current black coloured plates were changed to blue. The range of sets was reduced by one with the deletion of the old No. 9 set and the renumbering of the old No. 1 to 8 sets to No. 2 to 9. The No. 10 set remained unchanged.

1978 The range of Meccano sets was further reduced and changed with the replacement of the No. 2 to 8 sets by six completely new sets, labelled A and 1 to 5. The old No. 9 and 10 sets were left largely unchanged.

1980 Airfix themselves were in financial trouble and, in an attempt to cut their losses, they shut down the Binns Road factory, bringing to an end the manufacture of Meccano in England. Meccano was, however, still being manufactured in France, although under the ownership of General Mills, a United States toy manufacturer since 1972.

1981 General Mills bought what was left of Meccano Ltd UK, giving it now complete control of the Meccano franchise. All the existing Meccano sets were scrapped and a totally new range of sets were designed for production in France called "Meccano Junior". These new sets included many plastic parts and could only build small models. Thus Meccano's concept of "Engineering in Miniature" was now completely lost and it was reduced to nothing more than a toy.

2000 The firm was bought by Nikko, a Japanese toy manufacturer, in 2000, and Meccano sets were still being manufactured in France and Argentina.[5]

The production of blue/gold stopped in 1941 but prior to that during the war most of the plates certainly were produced in an economy version which were just blue and didn't have the gold criss-cross lines.

More importantly the export sets are not in the same red/green as the earlier uk production - it was new colours which started a little darker but by the start of the war had drifted to be virtually the same as the post-war red/green. In fact they are so close the only way you can be sure is to check the markings. Believe me I must have looked at several thousand bits now to restore my export set.

There are pictures of my export set 10 at http://www.nzmeccano.com/image-34091. This is a set from summer 1940 which should have gone to Argentina but didn't because of the war. It is highly likely it is the very last large export set ever made and is probably the only export set ever sold direct into the UK.

The other point is

Again it is true that the Korean War caused problems but production continued although some parts were blackened steel rather than the more usual brass. The major change with the new parts - especially the triangular plates was in 1954.