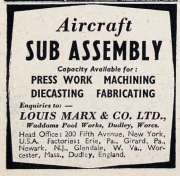 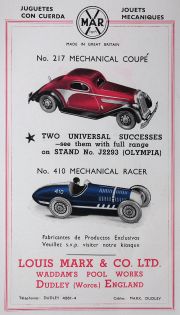 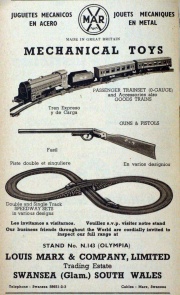 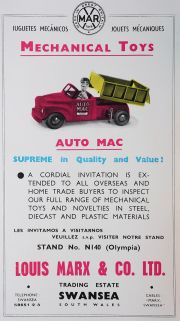 1919 Founded in New York City by Louis Marx and his brother David Marx, the company's basic policies were "Give the customer more toy for less money," and "Quality is not negotiable," which made it highly successful.

Initially the company had no product designs and no manufacturing capacity, so Marx raised money by positioning itself as a middle man, studying available products, finding ways to make them cheaper, and then closing a sale.

Funds raised from these efforts proved sufficient to purchase tooling for two obsolete tin toys from toymaker Ferdinand Strauss, one of Louis Marx's former employers. With subtle changes, Marx was able to turn these toys into hits, selling more than 8 million of each within two years.

Marx then bought the company it had subcontracted to manufacture the toys.

By 1922, both Louis and David Marx were millionaires.

Although sometimes wrongly credited with inventing the yo-yo, Marx was quick to market its own version, and during the 1920s sold an estimated 100 million of them.

1930s Unlike most companies, Marx's revenues grew during the Great Depression and at its peak, Louis Marx and Co operated three manufacturing plants in the United States. Additionally, Marx operated numerous plants overseas.

1972, Marx sold his company to the Quaker Oats Company and retired at the age of 76. Quaker owned the Fisher-Price brand, but struggled with Marx. Quaker had hoped Marx and Fisher-Price would have synergy, but the companies' sales patterns were too different. Marx has also been at fault for largely ignoring the trend towards electronic toys in the early 1970s.

Early 1976, Quaker sold its struggling Marx division to the British conglomerate Dunbee-Combex-Marx, who had bought the former Marx UK subsidiary in 1967.

A downturn in the British economy in conjunction with high interest rates caused Dunbee-Combex-Marx to struggle, and these unfavorable market conditions caused a number of British toy manufacturers, including Dunbee-Combex-Marx, to collapse.

By 1978 the Marx brand disappeared, and Dunbee-Combex-Marx filed for bankruptcy and was liquidated in 1980. The Marx assets were then liquidated, with many of the patents and molds going to Mego Corporation, another famous maker of dime store toys, and a large number of them going to Canadian toy maker Aurora.