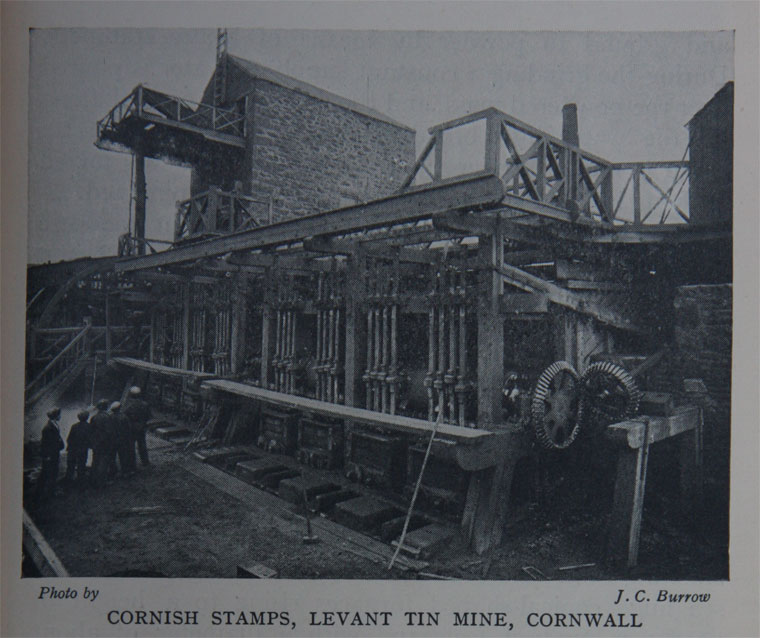 Levant Copper and Tin Mine is in the parish of St. Just, Cornwall. (Reference SW369344)

1748 Levant appears as a mine in its own right on maps dating from 1748 on and consists of an amalgamation of several smaller and more ancient concerns. Their names such as Boscregan and Unity live on as shaft names.

1820 Modern Levant was formed in about 1820 by a group of investors - known in the trade as 'mining adventurers', who agreed to raise the sum of £400 by purchasing 80 shares at £5 each. Two of the main investors in the company were Lewis Charles Daubuz and John Batten. Their leadership along with some excellent prospecting helped the company to locate a large copper deposit at a depth of 20 fathoms (120 feet) below the surface. The adventurers rapidly got a handsome return on their investment and further exploratory work was carried out. Levant swallowed up the nearby mine of Spearne Consols - now known as Higher Bal.

Shafts were opened up at Angwin's shaft, Tresize's shaft, Goldsworthy's shaft and Batten's shaft. The underground workings of Levant extend out under the sea but in general due to the bedrock being the impervious greenstone there were very few problems with flooding.

By 1820 the mine came into steady production of copper and after 1852, tin. It continued to produce large amounts of copper as late as 1910 and is known as the last of the great copper mines in the country.

1856 A 'man engine' was installed on Daubuz's shaft reached by a tunnel from the Miner's Dry. The shaft subsequently became known as engine Shaft one of only a dozen or so installed in Cornish mines. The journey time from surface to work place was radically reduced from over an hour to less than half an hour in most cases. The workers arriving fresher and more ready for work into the bargain. Along with all the new shafts and the installation of the man engine all the usual associated surface buildings sprang up around the site - stamps, both cornish stamps and californian stamps types; a calciner for roasting the ore and a mill area containing rag frames and buddles.

1893 Levant is quite unusual amongst Cornish mines in one respect as it did use pit ponies for a short time from 1893 to tram the ore on the main 278 fathom (below adit) tramming level some 1,600 feet underground.

1919 Levant is also remembered for the Levant Mine Disaster in October 1919. The second worst loss of life underground in a Cornish mine. 31 men were lost when the man engine snapped at the top of the rod and fell down through the shaft.

The mine has a single beam winding engine made by Harveys of Hayle in 1840.

It is now owned and maintained by the National Trust.