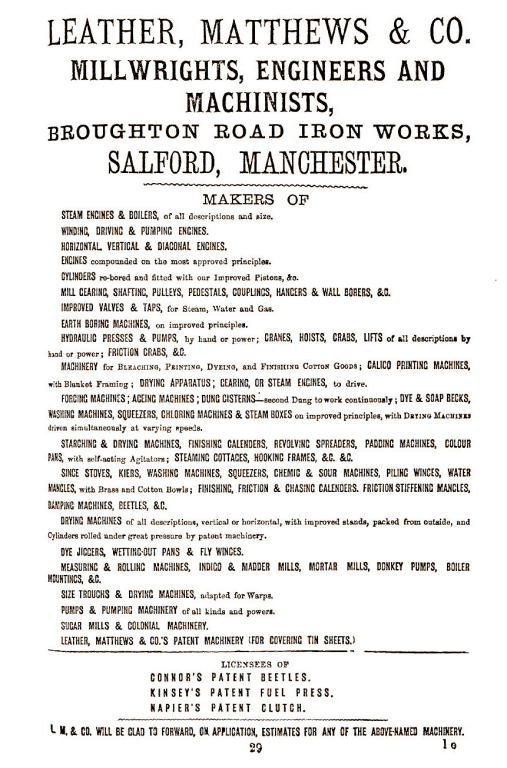 1874 Article in 'The Engineer' illustrating and describing Leather, Matthews & Co’s winding engines: 'With reference to the workmanship in this engine, it chances that we are able to bear personal testimony to its honest excellence, for having visited the works during their construction, we had an opportunity of seeing the care with which the different forgings were being made, and the unhesitating manner in which any casting in the slightest degree blown or defective was at once rejected...' [1]

1877 Bankruptcy petition (under The Bankruptcy Act, 1869) against Thomas Picton Leather, 7 Grecian St., Lower Broughton, now or lately carrying on business in copartnership with Thomas William Matthews and William Greenfield under the style or firm of Leather, Matthews & Greenfield [3]

1877 An advertisement for the sale of equipment, all nearly new, at Broughton Road Ironworks, on the instructions of James Halliday, the trustee, included a planing machine to plane 15ft 6in by 5ft by 4ft 3in, ny J. and J. Kershaw, a smaller planing machine by Walker, a radial drilling machine, 6ft radius, by Gregson, Brown and Son, and a 3 cwt dead-blow steam hammer (Sturgeon's patent).[4]